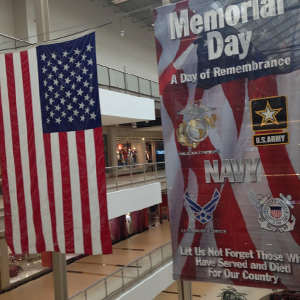 This picture is the American flag next to a banner designed by Anne, mother of Michael,  which is placed in a mall near her home to remind people of Memorial Day's meaning. You will read her comments later.

Most of the TAPS staff, including me, will be attending the 22nd Annual TAPS National Military Seminar and Good Grief Camp on May 26 - May 30. If you are joining TAPS at the Seminar, you might want to attend a workshop on Sunday, May 29, titled, "Become a Contributing Writer for TAPS Publications," given by Bevin Landrum, TAPS Magazine editor, and myself. We would love to see you there. If you are already a contributing editor and can't attend the workshop, you can contact us and we will make sure any questions you have are answered.

Although there will not be a Saturday Morning Message on May 28, feel free to write to me at carol.lane@taps.org anytime. I may not be able to answer right away, but I will get back to you. If you have something that needs immediate attention, please remember to call the TAPS Helpline at 800-959-8277, which is available 24/7. You are never alone with TAPS. The Saturday Morning Message will come to you as always on June 4.

Question for Next Week's Saturday Message

Instead of a question, the Saturday Morning Message on June 4 will be a collection from the TAPS archives about the changes TAPS events have made in survivors' lives.

I thought the Armed Forces Medley: 2015 National Memorial Day Concert  would be an appropriate group of songs for a Saturday Morning Message about Memorial Day activities.

From Anne, mother of Michael:  I designed the flag that hangs in the Palisades Center Mall in West Nyack, New York, to honor our son, Michael, USMC, who was killed while test piloting the Osprey helicopter on Dec. 11, 2000, on Memorial Day.

At the Lions Club in my town, we have a beautiful park to honor and respect all of our heroes. On the wall in the park are two plaques to honor my son and seven other heroes who have died in our recent war. Each year, I arrange the ceremony with a Marine Corps Honor Guard who  plays taps. A speaker from the Marine Corps and several others speak. Music is provided from our local high school. After the ceremony, everyone is invited back to our local firehouse for hot dogs, hamburgers, etc.

I will also be attending several schools that have invited Gold Star mothers to speak about our children. I feel that by honoring my child he will not be forgotten. This year, I am also honoring my husband, John, a Purple Heart Korean War veteran who died on June 6, 2015, and is buried in a veterans cemetery in my area. My son is buried in Arlington National Cemetery.

From Leslie, mother of Eugene:  On Memorial Day weekend, usually I am at the cemetery. This year we will be with grandkids. I see my son in each of his brother's daughters. I am fortunate to have them and all my other grandkids to love and dote on. Fortunately, at our apartment complex there will be all kinds of nice things at the pool for kids and adults. 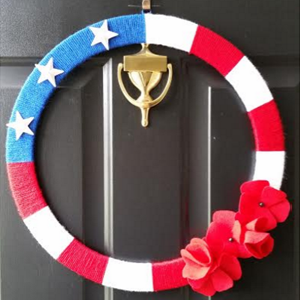 From Eunah, mother of Eben:  Last spring, I texted my son, Eben, an 18-year-old Marine, to wish him a happy Memorial Day and ask if any special events were being held on base. His reply was to ask me if I knew what the day was really about. Memorial Day, he told me, is a day for honoring deceased service members and should be spent remembering and appreciating the sacrifices they made for the people of this country.  At the time, I hadn't thought about the real meaning of the day and had sent him that message very offhandedly. My entire life, I had never considered Memorial Day as anything other than another break from work. I realize now how ignorant I had been.

This year, Eben has given Memorial Day a new meaning for us yet again. This weekend will be spent remembering our son, who died in March. I started to think about Memorial Day a few weeks after his funeral. I didn't like the fact that I had to leave him to go back to our home - it felt like I was leaving him there all alone - so I decided that I wanted to make a wreath to place on his gravesite. The project itself was easy enough, but emotionally it took its toll on me. However, despite the tears, I am glad that I finished the project so that I can give it to him on Memorial Day. This way I can leave a piece of myself and a piece of our home with my son, so he always has someone with him. 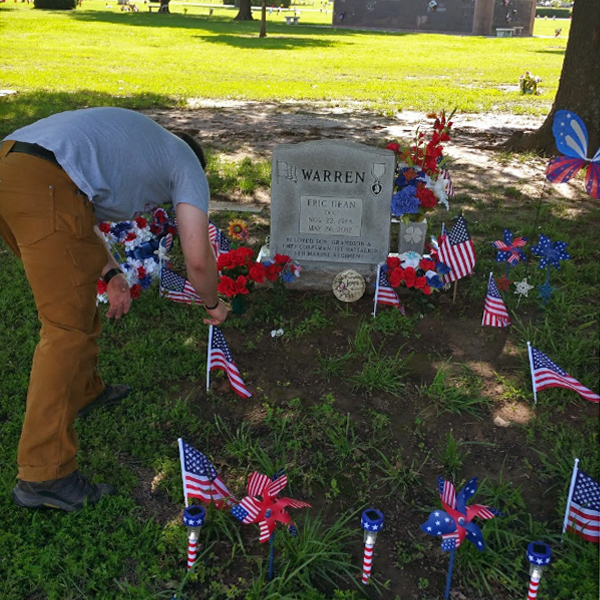 From Donna, mother of Eric:  Memorial Day for us is in the truest sense. Our son, Eric, was killed in action Memorial Day weekend 2012. The month of May is the worst, with Mother's Day, my husband's birthday (which was the last time we spoke to Eric), my birthday (which was the last time we got a Facebook message from Eric), his angelversary, and finally Memorial Day.  That's too much for anyone to have to endure in such a short period of time. Each year, we make it through knowing that his Marines will be coming in and staying a week or so. I spend so much time deep cleaning, preparing welcome baskets, planning huge meals three times a day, and planning entertainment for the boys that I don't have much down time. This is good, otherwise May is way too overwhelming. This year not only are Marines coming, but Eric's high school friends are also coming. And this year, Oklahoma City has opened a riversport park with whitewater rafting, climbing, extreme slides and more. We are taking them all there on Eric's angelversary because I believe it is exactly something Eric would love. I can think of no better way to honor him than to do something he would love to do. It's important to me to show his friends that I'm doing OK and he would want them to be OK. Yes, I fake it, I'm far from OK, but I need them to be OK. On Monday, Memorial Day, I will be speaking at the VFW ceremony with all of Eric's friends and family there to listen to his story. Keeping his memory alive is my number one goal, and publicly speaking about him does just that. Memorial Day weekend will be very busy for us, and I am thankful for that.

Above is a picture of one of the Marines who came last year at Eric's graveside. I can't tell you how happy it makes my heart to know how great his friends are and they were there with him surrounding him with love as he took his last breath.

From Merry, mother of Wesley:  I will be in San Diego for Memorial Day. My son, Eric, and daughter-in-law live in Fallbrook, which is located near  the back entrance into Camp Pendleton.  My desire is to get to the PX sometime during the weekend and purchase a new Marine Corps flag, which I fly in front of my home. The most important thing though is to get to the parade deck for Echo Battery on Camp Pendleton - maybe take a picnic lunch - to remember the homecoming for 2/11 Echo, April 2006, and to remember Wes. That would make me happy.

Set Sail with Your TAPS Family!

This summer, sail with your TAPS Family on the TAPS Alaska Cruise from July 30 to August 10, 2021, through the inside passage to Alaska onboard Royal Caribbean's Radiance of the Seas! While onboard, TAPS will have a variety of programs and activities available for you and we will gather each evening for a TAPS Family dinner. And to give you peace of mind, Royal Caribbean has extended their “Cruise with Confidence” program through the end of November. Anyone who books a cabin under that program will be able to cancel up to 48 hours before sailing (for any reason) and receive 100% future credit.

A Breath of Fresh Air

We want to help you reconnect with nature in simple, yet meaningful ways with monthly themes and weekly activities you can do anywhere. Join us as we navigate the wilds of our natural world and the wilds of your grief. You will have access to downloadable content, videos, and articles each week and a family campfire at the end of each month! Find nature where you live, whether it be in your community or your own backyard. Join in our activities and snap a photo to share with us. Let's join together for a Breath of Fresh Air!