The opening picture was sent by Donna, mother of Eric. It is a picture of one of her Yorkies, Gator, who is nuzzling her best friend's puppy. Later in the Saturday Morning Message, there's a photo of Sunny Bunny next to Donna's response to this week's question about the comfort pets bring a grieving person. 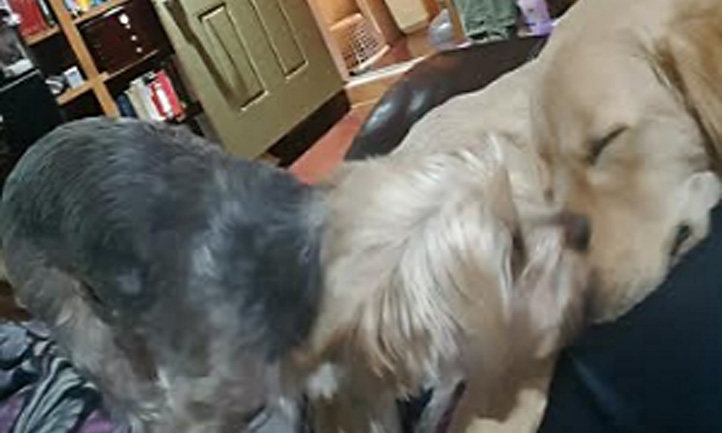 Sharing your space with a pet can be very rewarding. Just having them cuddle up next to you when you are feeling down can be so uplifting. A few weeks ago there was a question about pets, and there were several survivors who sent comments or pictures too late for publication, so I decided to ask the same question to include them in this week's Saturday Morning Message. There were also new submissions that I included. I hope you enjoy the pictures and observations about how pets enhance the lives of survivors.

Since it is less than a month until the 22nd Annual TAPS National Military Seminar and Good Grief Camp, I will post the following information in the Saturday Morning Messages for this week and next. If you are coming, you might want to attend a workshop on Sunday, May 29, titled, "Become a Contributing Writer for TAPS Publications," given by Bevin Landrum, TAPS Magazine editor, and myself. We would love to see you there.

Question for Next Week's Saturday Message

Each year around Memorial Day, I have put a question in the Saturday Morning Message about survivor plans for the weekend. This year, TAPS is offering all survivors a way to share what we are doing to mark this day of honor and remembrance.

Whether you're joining other survivors at the TAPS National Military Survivor Seminar, participating in your local Memorial Day parade or quietly reflecting on your loved one's legacy, TAPS wants to honor Memorial Day with you. Join us as we highlight the stories of our TAPS families and fallen heroes through our #GratefulNation campaign . You can share a blog, photo or short video and it can be a memory, note of honor or special way you have or plan to honor your hero on Memorial Day.

You can send your submission to me by Tuesday, May 17, and they will be shared in next week's Saturday Morning Message and highlighted on the TAPS website or social media. The question is: What are you doing for Memorial Day weekend?

Caryn, mother of Nathan,  and Mary Jo, mother of Christopher,  both sent the song "Unchained Melody" sung by the Righteous Brothers for the song of the week, so I thought it would be just the right one. 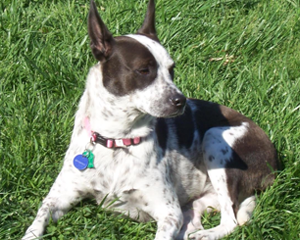 From Rebecca, mother of Griff:  On March 5, 2010, I received Axela from Griff's friend, Amanda, who was with Griff when he bought his Mazda 3, which is called Axela in Japan. We are both convinced that she came from Griff. It was no coincidence that she was found abandoned by Amanda's dad on their deck during a blizzard. When I saw the picture on Amanda's Facebook of this black and white puppy, she got my heart. She saved my life. 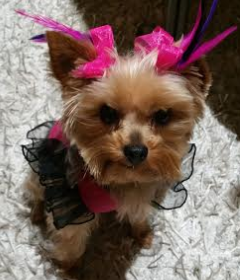 From Donna, mother of Eric:  When we lost Eric, we lost our only child. I felt like I was not a mother anymore. Unbearable. My husband decided I needed a lap dog to help me through the lonely days while he was at work. I took a year off. We got two Yorkies that have forever changed my life. At first, however, all they did was bite me and run away. It's a good thing they were so darn cute, because I was miserable for the first few months with them. Then they settled down, sat with me, snuggled with me, licked my tears and, most importantly, let me be a mother again! They need lots of attention but not so much as a child. They have their own closet that is filled with clothes, coats, boots, tutus etc. I take them everywhere I go. They are my babies.  They ease my anxiety enough that it is tolerable. I need them, and I would be lost without them. They have filled a little bit of the void left from losing our son. And they have given me a reason to keep on going. They need me, too. 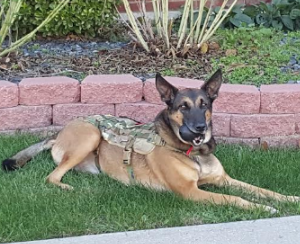 From Sandra, mother of Christopher: I first had to ask myself, "Do I want a pet inside our home again?" Maybe not.

When our boys were younger, my husband and I gave them two dogs, a beautiful brown and white bulldog and a tan shar-pei. Oh, we had so much fun with them. We all treated them like kids. LOL! Then the hard part came when the dogs were gone. As the boys got older, they asked for another dog. I just said, "No." I couldn't help remembering how sad we all were.

We didn't have another dog for years, but on June 2014 our life changed, we adopted a Belgian Malinois. His name is Dino, and he was 5 years old at that time. Before we got him, he belonged to the United States Marine Corp. Our son, Christopher, was a K-9 handler. Christopher was chosen to attend a training in Israel. That's where Dino met Chris.

Long story short, they worked together. We would hear of Dino's mishaps and his personality from our son. We meet Dino by Skype when we talked to our son. They served together in Afghanistan where we lost our son on Sep. 28, 2011. Christopher heard an explosion, and he ran to aid a fallen brother. He put Dino away before continuing. Christopher was killed by a second explosion. Dino never heard or saw his handler again.

My husband, Sal, notified the Corp that when he was ready for retirement we would like to adopt Dino. Well, the time came. Dino was home. It was as though he belonged here. My husband says that he knows that Dino could smell the blood line and that's why he is comfortable here.

Dino has been a blessing to us and Chris's brothers. You see, Dino was with Chris before he died. It's a comfort that we can touch, play and talk to Dino. His handler did the same. You can see and feel how much we mean to each other. We know that one day he'll go to doggie heaven and it will be a sad time, but our joy comes because we had Christopher's pal with us. Dino will always be the best medicine that was prescribed to us.

So, you ask would I have another pet? Absolutely.

From Merry, mother of Wes:  My pets, Ulie, my dog, and Mittens, my cat who Wes named 18 years ago, have been a comfort.

From Bob and Kitty, parents of John:  Before John entered the Army, he helped raise a German shepherd named Ginger from a pup. She died while he was deployed to Iraq in 2003. We adopted another German shepherd within months of Ginger's death. Her name was Sasha and she died at the young age of 6 ½,  which was a year and a half after John died. Because she reminded us of Ginger in her mannerisms and personality, she comforted us by just being around and loving us, too. Her early death reminded us also of the fragility of life and our need to show love and respect to those we not only live with, but those we encounter daily.

Dogs have a sense of your demeanor and by being available and leaning on you, they show love in a very tangible way. (And you can hug them, too!)

From Diane, mother of Caleb: Griz is a comfort to have, especially since he is Caleb's dog. He has comforted me just by being here. He doesn't try to give me advice or tell me it's going to get better or any other cliché. He's just here and available. When I cry, he is right there. He'd love to lick my face to make it all better. I know because he tries! Some nights when it is so difficult, I will sleep on Caleb's bed. Griz knows he is welcome on that bed, so he climbs up and settles in. Having him there beside me, or at the foot of the bed, has been a great comfort. I remember those early days when I'd sleep for a little bit and wake up crying. I could reach out and just hold onto him while my whole world was shredded to pieces. I am forever grateful for this sweet dog who has helped and continues to help me on this difficult journey.