This week's message is laid out a bit differently. Since the picture this week is a picture Sue, mother of Marcus, sent in response to last week's question about sharing a memory of our loved ones, I thought it would be good to include her memory in the first part of the message. 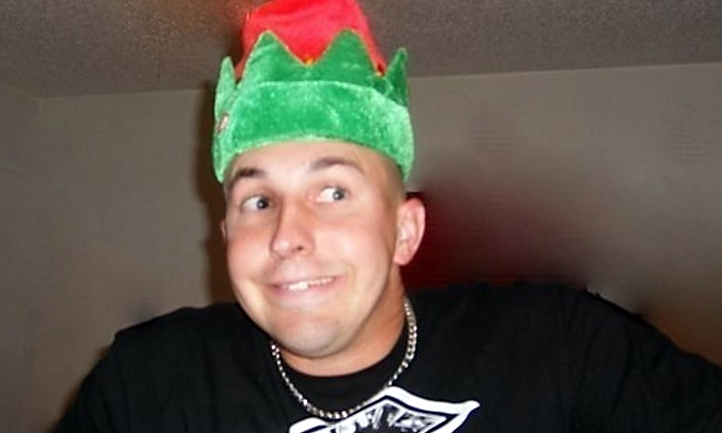 Here is her memory:

"Oct. 25, 2007, started out like a normal Christmas day for our family. WHAT? Christmas in October? Most military families understand that any holiday can be adjusted due to leave times and deployments. That was exactly the case for us. Marcus was home, and we were celebrating a year's worth of holidays and special days because he would be deploying in November or December. We received word that a family friend's brother was killed in a car accident out of state. (This was his second brother to die from a car accident in two years.) He asked if he could spend the day with us. Marcus, always a caring and sensitive young man, sensed that everyone was 'just too sad.' He and his wife had to go shopping for a bit, and when they returned they were laughing and giggling like two school girls. A few minutes later we heard his wife's laughter and music. Marcus came dancing into the room wearing this Santa hat and flashing his contagious smile. It was an instant mood lifter. Thanks for all your smiles and laughter for those 26 years, Marcus!"

The Answers from Survivors section of the Saturday Morning Message is also different this week. James, father of Andy, sent a song and a special reading of "'A Visit from St. Nicholas" that you can find in the Answers from Survivors. Thanks, also, to Leslie, mother of Eugene,  who responded with a lovely memory of her son's kindness. To all who reply or read this message each week, thank you. You are all a very special gift to me.

Question for the Next Saturday Morning Message

The holiday season can be stressful, so I thought the question asked last year at this time about  rewarding yourself would be a good one to ask. What are you going to do to treat yourself for getting through this holiday season? It doesn't have to be a large thing. It can be just giving yourself the treat of calling a TAPS friend once a month. You may submit your response anytime until Jan. 3.

Leslie, mother of Eugene:  In December 2010, Eugene graduated from Pennsylvania State University early. He was fortunate to have his choice of jobs and moved to Annapolis. Basically he moved all of his belongings to his new apartment from Penn State, unloaded and drove to New York to help me. I was having knee surgery, and no one was available but Gene to help. This was on his birthday, too. I don't think I was ever so amazed at my son's selfless act.

From James, father to Andy: My story is about our family holiday tradition that began with a folk song workshop at our boys' elementary school by local folk singers and storytellers, Chris Shaw and Bridget Ball. Andy was in first or second grade. We learned about their annual holiday concert held at the "acoustically perfect" Troy, New York, Music Hall. Andy fell in love with Chris Shaw's Adirondack tall tale of his Uncle Walt, who was a "patient man and a good hunter!"

That December, we attended our first " Mountain Snow and Mistletoe " concert, which normally included Chris, Bridget, John Kirk, Kevin McKrell (of The McKrells), and Brian Melick. Thus began our holiday tradition of attending their concert every year. After the first year, we found out we could purchase tickets for upper level box seats. Being secluded in the box seats and looking down onto the stage was the absolute best for two young boys!

Andy always had a flair for fashion. He'd dress up for their shows, normally in a dress shirt and tie, sometimes a sportcoat. And he always wore his Adirondack Red Suspenders, just like Chris Shaw wore! Sitting in box seats on the right side, we sat above percussionist, Brian Melick. He is a master of the udu drum and many unique instruments. Brian and Kevin McKrell performed a memorable reading of "A Visit from St Nicholas,"  with Brian playing a menagerie of instruments and generating many unique sights and sounds!

Here is a link to the unique reading and antics of " A Visit from St Nicholas "  by Kevin McKrell and Brian Melick.

When Andy was younger, my wife literally held him back by his red suspenders because he leaned so far over the edge, mesmerized by Brian and his instruments. Andy eventually owned quite a few instruments, many inspired by Brian. Being a tall tale, the Uncle Walt story changed from year to year. For two young boys, what could be better? Our boys looked forward to the concert every year.

Last year, Andy was stationed on a Coast Guard ice cutter and for the first time he wasn't able to be home for Christmas. My wife and I attended the final " Mountain Snow and Mistletoe" concert; it was Chris and Bridget's last concert. We spoke with Chris after the show and told him how we got started coming to their concerts years ago, how Andy always wore his red suspenders, just like Chris, and how Andy was always mesmerized by Brian's instruments and antics. Some days after, Andy happened to text me asking about a the title of a song by Chris that  he couldn't remember. It was "10 Dollar Christmas." I passed the information along to Andy, glad that he had thought of that. To me, that song expresses a real and simple meaning of the holidays.

It is not like being there, few things ever are, but you can watch or listen to the song "10 Dollar Christmas" by Chris Shaw here .

I'm thankful the circumstances that led to us starting this family tradition; one where we got to share such wonder and joy with our boys. What I wrote may not have told a lot about Andy, but thank you for allowing me to share; this gift of writing has helped me relive those wonderfully special times.