When I first started writing for TAPS it was just kind of a given I would be submitting a Father’s Day post. I thought this would be one of my easiest submissions—until I attended the TAPS National Military Survivor Seminar last month. 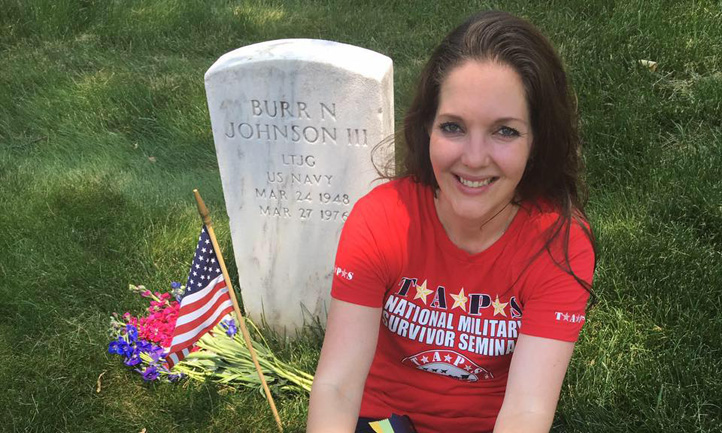 I went with the intention of being a shoulder to cry on and support to strangers who were young in their grief, only to end up with tear stains on my own cheeks more often than I anticipated. Where I gave my fair share of comforting hugs (I

It’s amazing no matter how much time goes by and how long I’ve been consciously experiencing my “grief journey” that now and then I find myself broadsided by new emotions that show up out of the blue; and that’s not necessarily a bad thing. I believe grief is a living emotion which can change over time. I embrace new tears as proof and a reminder that though I don’t remember my dad, I still loved him—and I still can and thankfully still do!

For those who haven’t met me or haven’t read my other posts, my dad, LTJG Burr N. Johnson III, was shot and killed during a drill in Pearl Harbor when I was two years old. His death impacted my life more than I can express. I spent my childhood and part of my teenage years thinking/believing I had no right to mourn or miss him. How could I? I didn’t even know him!

My brother, who was 8 months old when Dad died felt a greater disconnect from our father until three days after his 28th birthday—he was the exact age Dad was when he was killed. That day my brother looked at his own two beautiful babies and felt a sickening kick in his stomach as he experienced excruciating empathy for his own father torn away from our young family at the tender age of 28 years and three days. My brother put his budding grief on the shelf until last summer when a series of events opened his eyes and heart to powerful healing that was a long time coming.

My experience with grief was different. Once I started on the path I never left. 25 years ago today I was still firm in the mindset I had escaped any sort of trauma from Dad’s death and had no right to any sort of connection to him. On June 16, 1991--Father’s Day 25 years ago, I had an experience so strong it shook my foundation and shaped the rest of my life. From that point on I felt a powerful connection to my father. I felt his guidance and felt his love. I even missed him sometimes and felt a huge lost part of who I was had been found. Years later I researched deeply into the events that lead to my dad’s death. I connected with his old shipmates and faced more challenges, more painful truths and ultimately learned more about who he was and had

On Saturday, June 18, 2016, the day before Father’s Day, my brother will run his first marathon and will run it in honor of Dad. He will be wearing the TAPS singlet, the “Our Memorials Move” number and will get to wear his first marathon medal along with his first TAPS medal as he completes a 26.2 mile virtual run. That same day I will cross the Wasatch Back Ragnar Relay finish line after running 15.6 miles total while wearing my TAPS singlet, my Memorials Move number and receive my virtual run medal to compliment my third Ragnar medal.

My brother and I are Gold Star Children. We didn’t understand what it meant but we do now. We have both worked past social stigmas that we should, not even just “be over it”, but that we weren’t allowed to feel, to cry and to love this man who was and is still such an important part of who we are.  We both look forward to honoring our dad by running in his name and donating to a cause that has helped so many survivors….including us! I can’t think of a better way to honor Dad for Father’s Day!