On October 9, a team of 10 athletes from Oshkosh Defense ran with Team TAPS at the 32nd Annual Army Ten-Miler race in Washington D.C. The Oshkosh team each were paired with a fallen hero and wore an honor race bib with the soldier's name and photo. The team ran in memory of their hero as a tribute to their family and as a way to remind others of the sacrifices our service members and military families make for our country. Team athletes were encouraged to reach out to the families of their hero; some were even able to meet their hero's family in person at the TAPS Remembrance and Celebration Pasta Dinner the night before the race. 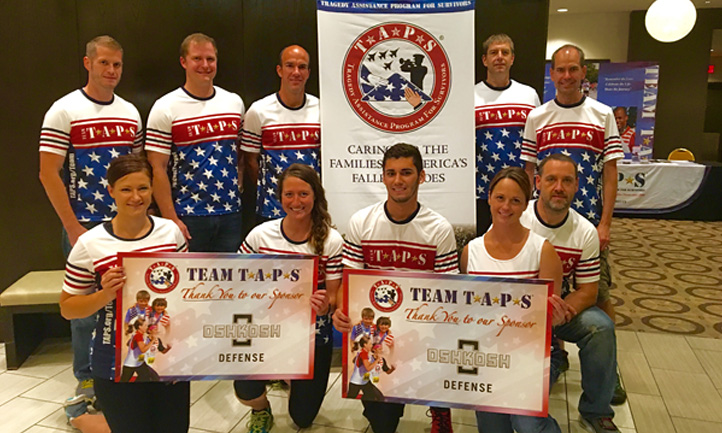 For these runners, this was less about the run and competition; but, more importantly, the weekend experience was about humbly and proudly wearing their hero's photo on their TAPS jersey — carrying on their story and legacy, sharing it with those on the course.

"Our Oshkosh team members are honored to join the TAPS team this year for the Army Ten-Miler," said Jenn Christiansen, Vice President of Business Development for Oshkosh Defense.  "Each of them is running for a hero who will never be forgotten, and in support of their loved ones who carry the heavy burden of their loss."

"We are honored by the ongoing support of Oshkosh Defense and their amazing employees, helping us honor those who have lost loved ones to military service, regardless of circumstance.  Having Oshkosh athletes join us alongside the over 135 runners of Team TAPS in this year's race was inspiring," said Bonnie Carroll, founder and President of TAPS. "Their commitment, excitement and the funds and awareness they raised supports hundreds of our TAPS families. We are deeply and forever grateful."