From the moment Cindy Grier heard about Team TAPS and the mission of TAPS, she knew she had to get involved. A couple of years ago, Cindy came across Team TAPS at the Disney Princess Half Marathon expo. “I just started crying,” Cindy said about learning about Team TAPS for the first time. "I was like ‘this is what I need to do." 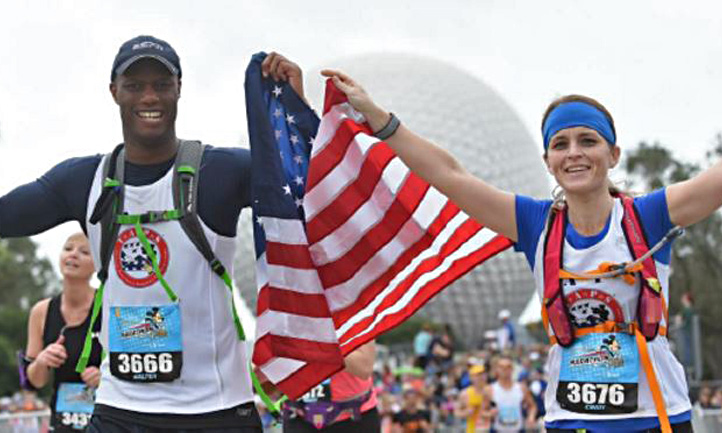 Cindy is no stranger to military life; her grandfathers were in World War II, her father fought in Vietnam and her brother and brother-in-law are soldiers. It felt like a natural fit to run with Team TAPS.

Cindy has run about 10 races for Team TAPS, but for her, it has become more about the people she meets and the interactions she has along the way rather than the race course itself. Running for TAPS has been about carrying on the legacy of our fallen heroes.

When Cindy began running for Team TAPS, she was given a fallen hero to run in honor of through the Fallen Hero Match program. Cindy was matched with Army Col. Jim Harrison, who died in Afghanistan in 2007. Running and raising funds in memory of Col. Harrison has allowed Cindy a way to remind others of the sacrifices our servicemembers and military families make.

“It’s a very emotional thing for me,” Cindy said about running in memory of Col. Harrison. “It allows me to let his family know that I appreciate his sacrifice. I wish I could meet him. People see his picture, and they ask me about it and I can tell them about him. They learn about him and also learn about TAPS. I can’t imagine having to deal with that, but if I can help at all through donations, I will do all I can.”

Cindy runs every race for Col. Harrison, and she’s even been able to connect with Col. Harrison’s surviving wife, Penni. Although Cindy and Penni have never met, they share a special relationship. The two are friends on Facebook, and Cindy keeps Penni in the loop by taking a photo in her singlet before every race and tagging Penni in the photo. “She is now part of our extended family, and I am eager to meet her face-to-face,” Penni said.

Cindy’s most memorable experience with Team TAPS happened while she was running a half marathon. Cindy and her running buddy, Walter, were at mile 11 and ran past a father and his children as they cheered Cindy and Walter along. But, as the pair passed the family and the father got a glimpse of the soldier on her back, the father hollered “Wait, wait, thank you for your soldier!”

“A lot of people tend to forget about our troops and fallen heroes, and when they see it and you start talking about it … it hits them emotionally,” Cindy said. “It’s a way for them to donate to a cause.”

For Cindy, running for TAPS is a way to stay active, but more importantly, it’s about humbly and proudly wearing Col. Harrison’s photo on her shirt; it’s about carrying on his legacy and sharing it with those around her.