There was a moment at last year's National Military Suicide Survivor Seminar when I looked around at a room filled with people I trust and respect - many of whom feel like family - and felt a rush of contentment. But then, in the midst of the overwhelming gratitude for the richness of my life, a terrible thought struck me. I realized that if not for the death of my husband, John, I would not know any of them. 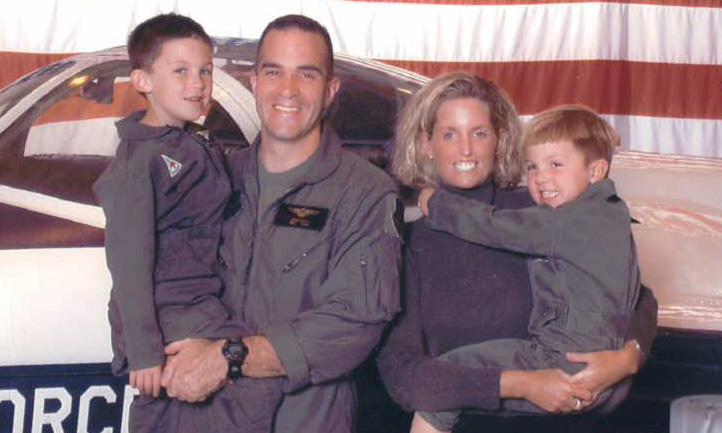 In that stunning moment of clarity, I started to think of other positive changes. With John's death, our world fell apart. The home we had built together was painfully, irrevocably changed. We were best friends, together for 23 years, and loving parents to two young children.  No part of that covenant seemed intact.  His death left a path of destruction and self-doubt, of desperate searching for answers and of feeling excommunicated from everything that we knew.

Yet, where once we were only trying to find our way in the aftermath, there has been, and continues to be, rebuilding and remodeling. Great things have happened in our lives, beautiful moments and un-expected blessings. In a way, John's death brought us startlingly fulfilling gifts - my relationship with God changed; my boys and I became closer; my fight with my own guilt brought me to a new place of self-awareness.

There have also been deeply fulfilling changes in my career. While the foundation of my professional life as a clinical social worker would not have been possible without John's support and the inspiration he provided in life, the opportunity to dramatically change the conversation on military suicide would not have been possible without the particular circumstances of John's death.

In my early grief, I looked outward for answers. I asked questions, read books, saw therapists, tried different churches and met with mediums and psychics. I became a gatherer of healing knowledge. I was feeding an inward need to make sense of John's death for my boys and myself. As I gradually became able to ground myself in even the smallest comforts and remembered certainties, I realized that my own search might be able to help other families who, like me, needed to make sense of it all.

And so we developed the TAPS Suicide Postvention Program to help other survivors grieving suicide loss. The positive effects of our work as a community and as an organization are undeniable. We have been able to raise awareness and influence policy at both the Departments of Defense and Veterans Affairs, serve on suicide prevention task forces and work closely with each service branch. We are expanding work with the National Guard, developing suicide prevention toolkits, and finding new and better ways to change the way other organizations view the scope of this epidemic.

We're making a difference on a large scale and on a personal one. Because my healing started by creating relationships with other survivors, we started comprehensive peer-based programs to alleviate disenfranchised grief. We provide safe spaces where survivors of suicide loss can come together and grieve, places where zebra stripes are the norm rather than the exception. We show surviving families that they can consider the possibility of hope.

The understanding that started at the Suicide Survivor Seminar, that John's death has transformed me, my life, my family and my work, became even more real this past winter when I was selected as the American Association of Suicidology Loss Survivor of the Year. The award cites TAPS work in postvention, trauma response and suicide prevention, but it also mentions my own post-traumatic growth and change. This award underscores my deepest commitments to raising awareness, advocating tirelessly and using peer support to learn how to cope with the unique grief following suicide.

To learn more about the AAS conference visit bit.ly/TAPSAAS.