I was excited and nervous in the days leading up to my visit. Then the day came.

On Wednesday, March 4, 2015, I took the metro train to the Arlington National Cemetery stop. The moment I stepped off the train, I took a deep breath..... then another deep breath.......and another.  I could see the entrance to Arlington as I walked off the elevator and I was in immediate awe of its beauty.  I could feel the butterflies flying around in my stomach, and I had to take in many more deep breaths because I was so incredibly nervous. You see, I have visited my brother, Vincent, at Arlington several times since he was laid to rest there in 2011. This is the first time though I visited him by myself. I am usually with my mom and my sister. Before I traveled to D.C., I went to the store and picked out the perfect Easter card to give to Vincent. Of course by the time I began to write him a note in the card, I didn't know what to say. 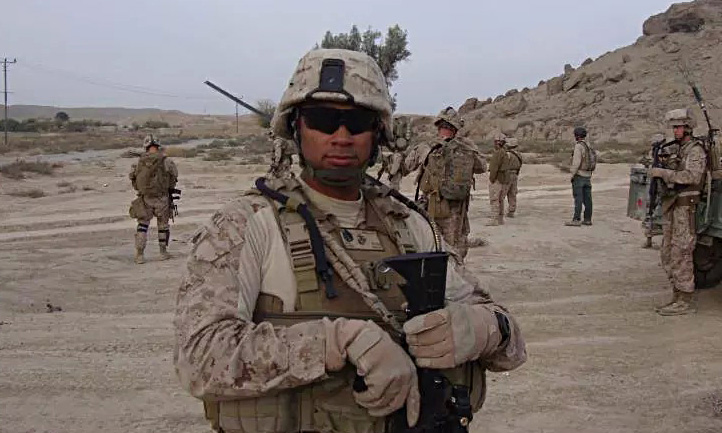 After walking what seemed like forever from metro, I finally made it to the Visitors' Desk inside the cemetery. When I let the front desk know I was there to see my loved one, I immediately received the most positive and loving energy from the staff. They helped me with my luggage onto the shuttle and drove me right to Vincent.

When the shuttle driver made that left onto York Street, I could feel my anxiety bubbling over. I really had to talk to myself, and remind myself I needed to show Vincent my brave side. He was brave everyday of his life as a Marine and I wanted to show him I too am brave. As the shuttle driver made his way down York Street, I knew exactly where to tell him to let me off. I always know where Vincent is because there is a beautiful little tree we call "The Charlie Brown Tree" that sits a few rows away from him.

I hopped off the shuttle and made my way to Vincent. It was a wet rainy day and there were puddles of mud everywhere. I carefully walked across the row and when I made it to Vincent I felt better. Yet, my mind went completely blank and I did not know what to say. Even though I planned on saying a lot, I had no idea what to say at that moment. So, I just stood there looking at his headstone and slowly breathed in the wet, rainy air. I looked around and realized I was the only person in the area and it was very quiet and peaceful.

I felt like Vincent was waiting for me to start talking.  After a few minutes my thoughts began to flow and I literally poured my heart out to him. I talked about things that I had been holding in for so long -- everything that has been going on in my life and all of the struggles I have been going through. I told him about all the wonderful experiences I had while lobbying on Capitol Hill. I felt proud to be able to visit him and tell him about something good I was doing. I felt really really proud. I really expressed my heart and soul to Vincent and it felt so good to share with him.

I felt so grateful to have that time with him and to tell him things that I had told no one else knowing that my secrets were safe with him. And you know something? It felt like old times. In life, Vincent accepted me totally and completely. He never put me down or judged me. I could be myself around him and it sure felt that way that day at Arlington. I played him one of my favorite songs. It is called "Tree" from the album mi Mandela.  I held my phone close to his headstone so he could hear the song. It was just for him.

I then said my goodbyes to Vincent and headed back to the entrance. As I got off the shuttle to go back into the Visitors' Center I heard singing in the air. I looked up and there were probably 30-40 geese flying in the direction that I had just come from. I just stood there in silence, and in awe of these beautiful geese singing and talking to one another. I felt Vincent's energy in the air. It felt as though he was saying see you next time London, see you next time. He knew I was there.