Since my husband’s death in 2010, Veterans Day has always been my hardest holiday. Surprisingly it is not his birthday or his angelversary, nor is it Father’s Day or our wedding anniversary. It is Veterans Day, and it is a day that always seems to bring me to tears at one point or another. 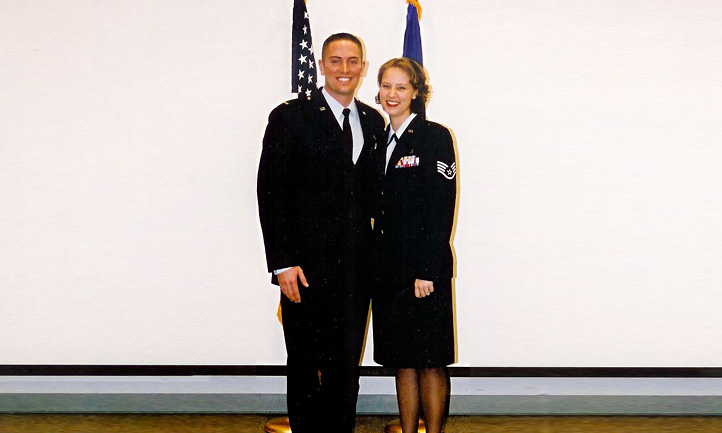 Jeff and I both joined the Air Force right out of high school. We didn’t know each other at the time, but met shortly after while in the same squadron at Technical Training School. Neither of us really knew what our futures had in store, but knew we didn’t want to go to college after high school and the military was the career path we decided to go down. We dated for only a month and a half in tech school, then I graduated and was sent to my first duty station in Guam while he went to Alaska. We were separated for 15 months before we got married and were finally stationed together in Alaska. From there, both of our careers truly began to flourish and we built our Air Force life together.

Perhaps that is why Veterans Day is so hard for me. For when I think of my military service, I think of my husband and the military life we built together. We not only met through the Air Force, but we served alongside each other and supported each other every step along the way.  Even a few years down the road when he decided he wanted to become a pilot, I stayed active duty to put him through school, then left the military to follow him and support his career. I took a step back because I knew that from then on we would have a hard time being stationed together and a long distance relationship was something we didn’t want to have to do again. I separated from the Air Force freely and without any reservations….a decision I never regretted. I was happy to take a step back to support him and help him follow through with his dreams.

Do I miss serving in the Air Force? Absolutely! The military gave me direction, purpose, and most especially a family. Not only did I meet my husband and have our kids while on active duty, but the military community itself also became its own unique family for us. Our Air Force family is truly what has gotten me through since Jeff’s death. Not only where they there in the immediate aftermath, but even now five years later they still show up and support us in ways I never could have ever imagined. The military is a community you just can’t understand unless you have been a part of it, and it is an amazing and beautiful thing I am so thankful to be a part of.

As a fifth grader this year my oldest son had to write an essay about what Veterans Day means to him. As I read through his essay, I began to think of how our society often thanks veterans for the sacrifices they have made in service to our county. Being part of the military, whether it is active duty or as a family member, is not easy by any means. We deal with a lot and endure things many others could never comprehend. However, for me, my service, and even Jeff’s service and ultimately his death, was never a sacrifice…it was an honor. I take a lot of pride in saying I served in our nation’s military and I know Jeff would say the same.

So this Veterans Day I will remember the days Jeff and I spent in the Air Force together and I will celebrate them with pride. I will let the tears come as they need to for the burden of the day will sit heavy on my heart.  I will stand with my chest tall and proud as veterans are recognized throughout the day not only for myself, but also for my husband. It is a day to remember and recognize, so I will do just that and urge everyone else to do the same.