About a year ago I was on the phone with the head of Peer Mentor Training for TAPS. We were chatting about the upcoming national seminar taking place in Washington DC. He mentioned that it is a great experience but suggested for my first seminar I should attend the annual suicide seminar because it is so specific to my loss. Well, I know good advice when I hear it! (Thank you Don L!) I was on a plane and headed to Colorado Springs not knowing what to expect. I was nervous and anxious and thought this was going to be emotionally draining and overall depressing being surrounded by so many people in such great pain. My assumption was wrong... 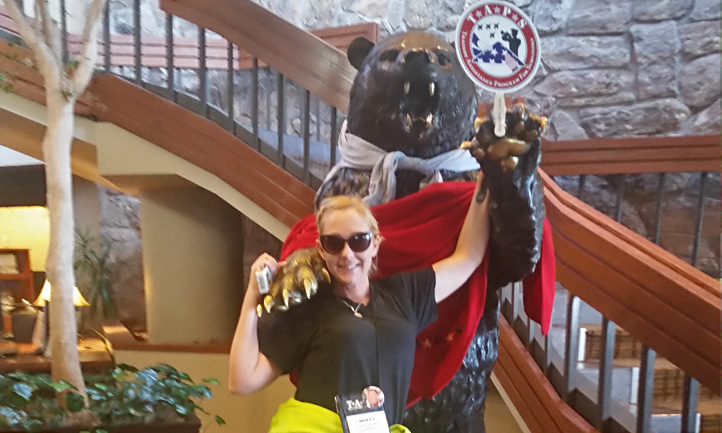 First off the resort the event was held was breath taking. The view, the property it sat on, the staff...all top notch. I arrived a day ahead of the kick off for my peer mentor training. It was a day long emotionally intense crash course on aiding the newly bereaved grieving the loss of their loved one. The class was relatively small. About 30 of us in attendance. Not all widows. There were moms and dads siblings and others. The class was put on by Don and Terri and they knew their stuff. I asked a million questions and felt like I was monopolizing their time but they humored me and graciously answered them all with care. There were many tears and some laughter too. We were having to face some of our own deep wounds in order to effectively support our future mentees. It was at times difficult but therapeutic at the same time. By the end of the day I was certified. I am now a peer mentor and very much look forward to being a shoulder to those widows who come after me. I hate that there will be more suicides but I'm proud to be a part of a group of caring individuals waiting to walk beside them in the time of great anguish and need. To Don and Lisa: thank you so much for sharing your knowledge and passing the baton of hope and support to us. Your class was profound. You are very good at what you do and I admire it.

After the class there was a dinner planned but I was so completely exhausted I headed to my room and was asleep before the sun set. The next morning was the big kick off and I had to be up at 7am for breakfast. I'm not a morning person at all but to my surprise I woke up before my alarm totally ready to start the day. When I walked into the main lobby of the lodge I was shocked at the amount of people around. Over 500 family members showed up from all over the country. It was overwhelming to know this is just a small percentage of people grieving the loss of a veteran suicide. I was never more aware of the epidemic.

We had the opening ceremony shortly after breakfast. Bonnie spoke. She's the reason we have this network. TAPS is her baby. Born out of losing her husband and a feeling there just wasn't support out there for those who suffered the roller coaster of emotion in the wake of service members deaths. I admire her immensely. Next came Kim R. She is responsible for creating the suicide survivor division of our beloved TAPS. Over the years they have tailored support specific to suicide death. No manner of death is harder to grieve but we do deal with very unique struggles when the passing is by suicide. I am incredibly grateful for her hard work and dedication to the effort.

The entire event was organized by Kim B. We have been Facebook friends since Mike’s death and joining TAPS in 2013. She's always been a mentor and friend when I'm in need. I finally got to meet her in person and it was like reuniting with an old friend. I genuinely like her and enjoy her company. She has such a gentle energy around her. She really does care...and she can put on one hell of an event. The entire weekend seemed to go off without a hitch! I've got so much respect for her. 500 people is no easy task. I can't even get all three of my kids in one room at the same time most days!

After the opening ceremony we broke off into smaller specific topic groups. I met Dr. Adam Walsh with the Department of Defense (DOD). I approached him and identified myself. I prefaced my dialog by saying some things the DOD has released which really upset me. I don't hold him responsible, or even really the DOD...but rather the superficial and vague findings in research pertaining to service member suicide. To my surprise he agreed. He listened to all my concerns. He took notes and was receptive even. I'm not going to lie...that threw me off! I told him about the program I wanted to see put in place for spouses prior to transition as this time period seems to be a common trigger in suicide. He told me it was actually a brilliant idea and was going to see if something can be put together.

I asked him about the wording in the published data regarding military suicide. Specifically the "marital discourse" listing as a result. I explained to him that surviving spouses already deal with amazing guilt and reading that feeds into the problem. It delays our recovery not only blaming ourselves but seeing the government does too. He agreed and said the verbiage needed to be modified and will discuss that with staff. I asked him why there wasn't more education and support for spouses trying to aid their service members suffering PTSD and TBI. I was pleasantly surprised by his response. He told me a brand new program just rolled out targeting this area on the Marine Corps base. He wants me to attend the one on Camp Pendleton and take some notes. I am relieved to know something is starting. Overall I loved our conversation. He gave me his card so we could communicate and he's sending me the results of studies related to the cause. The wheels turn slow but I'm glad it's at least being reviewed. There is a hope there.

I made it a point to seek out people who sat alone this weekend. I absolutely love the moment a person realizes they can trust me and the flood gates open. They are able to get out all these feelings, fears, and tears built up. I got to pull emotions from reluctant survivors. I can normally tell within a few minutes talking what aspect of their grief they are struggling with most. I ask them to tell me about it. I truly believe the more you talk about something the less power it has over you. "How are you?" Is a rhetorical question in normal settings and in passing. It's not between survivors. If we ask...we just gave you the green light to rant, scream, cry, laugh, pray...emote. No one else understands like us. We've either been there or are walking through it currently. Share. Share. Share.

There was something I was really struck by this weekend. Something I will be more aware and attentive to in the future...that was the virtual invisibility of siblings’ grief in the wake of loss. Not by TAPS, by society in general. TAPS honors them properly. Talking to siblings the past few days made me realize, we need to focus on them as much as possible too.

Oh, also I was asked to do an interview with the local news. I agreed. I figured there were a bunch of us and I would likely not be on the show when it aired....It was the top story of the 5:00 news Saturday night! The piece only included two people: Kim who created the division...and ME. I was super shocked but really honored.

I can really see myself dedicating my life to this group. It feels like home to me. I will assist in any capacity I can be useful. I'm all in. This weekend sealed the deal. My experience now has changed my mind. This is something I will never forget. A real life changing soul connecting event. I've learned and grown even healed in four short days. I'm truly blessed. It's TAPS all the way. Hands down. No other group is like it. If you are a member or TAPS and have never attended an event...DO. If you work for or own a company looking to donate or sponsor a worthy cause this is it. If you still don't know about TAPS go to the website TAPS.org. If you know someone who's struggling with their own loss send them to the website to sign up for support. No one has to walk this painful path alone. We've got your six!