Every year for Mother's Day I put together a photo book with pictures of my boys and myself from the past year. I give the book to my mom, my mother-in-law, and keep one for myself as well. As I work on the current year's book, I always seem to look through past books to get ideas as to how I have put them together, and as I reviewed our older books this year something caught my eye that I had never noticed before. 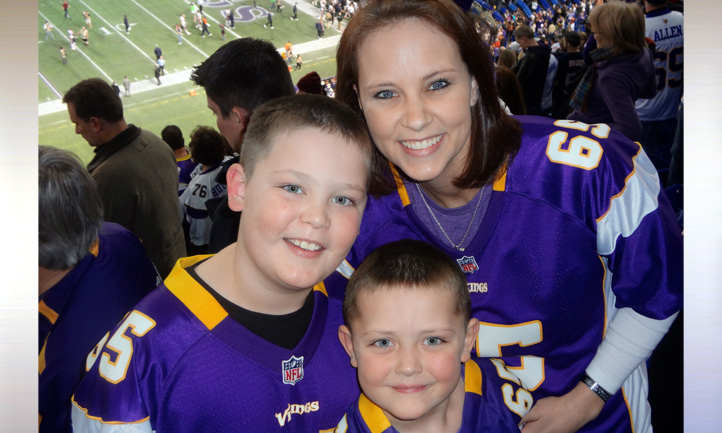 The first book that always draws me in is 2011…the year that covers my husband's death. I know it is the one that has the most picture of him, so I take my time staring at his pictures. This year, however, in addition to looking at him, I actually looked at myself for seemingly the first time, and, to be honest, I didn't even recognize the woman I saw in those pictures. She was lost…and it showed.

They say you can tell a lot about a person by looking into their eyes. In the pictures of myself from the first year following my husband's death, my eyes were empty. They were flat and missed the sparkle that used to be there. It was the sparkle that Jeff brought to my life, and when he died, in a sense, so did I.  When looking at those pictures, I felt that it wasn't just the sparkle that had disappeared, but that I, myself, had also disappeared. Sure there was a smile on my face, but my eyes told an entirely different story. It wasn't until a couple years ago when a friend commented on a Facebook picture I posted that, for the first time in a long time, she could see the sparkle in my eyes again. At the time, I didn't understand what she meant by that, but I do now.

So what has changed? For me, the past four and half years have brought a lot of realization and transformation. I had to realize and accept that I could no longer have the same relationship with Jeff I had before. He was my everything and I couldn't just let that go. However, even though his physical presence was taken away, that didn't mean our relationship as a whole was taken away too. It just had to transform and take on a new shape. I know he is still with me; I can feel him in my heart. I still talk to him and I can feel his presence all around us. The relationship is still there and I know I can still count on it. I still love him and I can feel his love around me, but it has changed in that he is no longer physically present.

In addition to the transformation in our relationship there was also a transformation within myself, and I eventually realized that I didn't want to let his death take the life out of me too. In the beginning, I was just going through the motions and, while that was okay for a while, I didn't want that to be how I lived my life long term. I know Jeff wouldn't want that either. When the numbness began to thaw and I started feeling again, I knew that I also needed to start living again. I became more present in each day and when I did that, the excitement and enjoyment of life started to return…and so did that sparkle.

"Hardships forge and polish our lives, so that eventually they shine with brilliant fortune and benefit. If left in its raw, unpolished form, even the most magnificent gem will not sparkle. The same applies to our lives."  - Senora Roy