Coming to a TAPS event alone can make us wonder how "we will fit in, how we will be treated, and what the event will be like". That was the question last week and many have written to say they will be waiting for this week's answers. Some who answered this question talked about attending a TAPS event and others addressed going out socially after the loss. In the Spring 2014 edition of the TAPS Magazine, there is an article, "Attending TAPS Events: Encouragement for the Newcomer", dealing with exactly this question. The article has answers from other survivors adding more ideas to the ones in this week's message. Thanks to all who responded to this week's question and those who read the Saturday Morning Message. 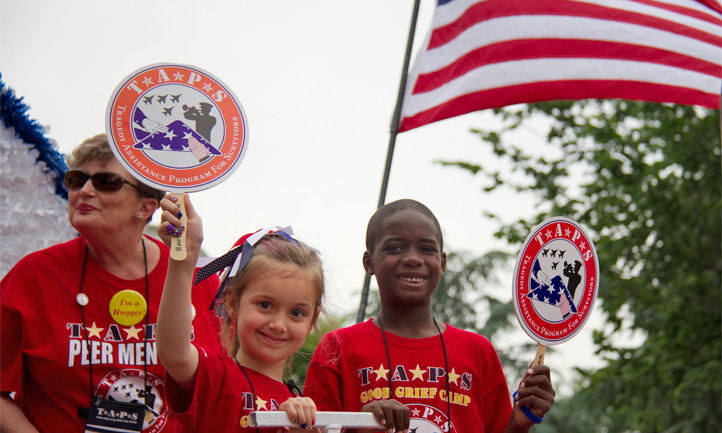 The discussion topic for next week came from some newer survivors: What are some ways other survivors honor their loved ones? Since those who most often ask the question are new to the journey, what are some things you have done that don't take a lot of emotional energy?

I invite you to respond to this week's question or share a topic you would like to ask the group by sending a message to carol.lane@taps.org.  I would love to hear from you anytime about anything. Sometimes writing to someone can be helpful.

⇛The newest way to keep in touch with the TAPS Online community is through Twitter. We will be posting times for chats and other Online community events that might interest you.  You can find us by clicking on this link - TAPS_Chat. If you don't have a Twitter account, you can make one through this link.

♫ Mary-Ann, mother of Blake sent the song for this week. Kate Smith was a radio and TV personality in the United States particularly known for her rendition of God Bless America composed by Irving Berlin. In a walk back in history, Mary-Ann sent this link which includes an introduction of the song by an announcer as well as the song's introduction sung by Kate Smith which is not usually included when singing the song in modern times.

From Rebecca, mother of Griff: You will not be alone. When I went to my first TAPS seminar, I was greeted with warmth and many hugs. You can sit anywhere you want and soon realize that we all have one thing in common. Our hearts hurt, because our much loved servicemembers are not on earth anymore...but in Heaven's Military. When you register online, please write your concerns about sitting by yourself and eating alone. There is only understanding at the seminars. We are never alone, because we are free to express all of our feelings.

From Christine, mother of Adam: Everyone was so nice. I went to eat and ordered it to go. Even the waiter asked me if I was sure I didn't want to stay. The picture I had of Adam was so  crumbled, but they really worked on it and had a  button for me the next day. Everyone tried to get me to at least stay for lunch, but I was panicking. I was the last one to enter this whole room. I sat beside a mentor, and she was so nice. Very loving room full of people.

From Ruth, mother of James: This is such a hard time...  you don't know how people will react to you... somehow you suddenly feel like everyone is staring and whispering.... you feel so different....  you worry about someone seeing a tear in your eye....  I found that I had to put all of these things in a box...  an empty box that sat on my dresser and still remains there.  I don't use it as often these days, but in the first steps of my journey it was opened a lot.  The bottom of the box has a picture of my son attached to it.

Walking into a room for the first time is hard, but I found that if I went up to a group of people I found so much love and warmth.  Each time I would go into a room, I would imagine what was going to happen, but I could hear my son saying, "Mom, these are your friends.  Let them embrace you.  Let them know that you are still my mother and you still want to talk about me, to learn new things about me and know that they will never forget your little blond haired boy.  Most of all remember that they too will need your love and support when they suffer a loss.  It is always good to repay a kindness."

Each time I would go out I would open my box.  It seems as though the young boy that I loved so much was pushing me forward...  I know that he would not want me to put myself into a box, so I cherish the time that I spend with others.  You see I feel as though my son is sharing the wings that he has earned in heaven to lift me up and inspire me to go on....

From Leslie, mother of Eugene: I was a single parent for many years and always felt awkward coming to an event alone. I found that you just sit with a group and start talking. People are usually very nice. I found after I lost my son, people didn't know what to say. A big smile from me usually broke the ice. Sometimes I would add that Eugene would have enjoyed the wedding or whatever. That relaxes people as well.

From Merry, mother of Wesley: The only event from TAPS I've attended was at Fort Carson last year.  I would have to say, I never felt alone or unaccounted for even though I did not know anyone.  Paul took me by the hand and made sure I was immediately in contact with a friend of his family.  My mentor, Angelika was there in the evening, but I can't remember if she was there during the day.

The break-out session was good although I did not know anyone in that group either.  I felt we were all in the same boat and have a story to tell.  My personality points me in a direction that keeps me alone at times, but I'm not intimidated to step up and introduce myself.  I am not sure everyone feels that comfortable in groups where they do not know people.