As I ran yesterday morning, a song I often affiliated with my Phil began to waft through my head phones. “I could see it in your eyes how proud you were to fight for freedom in our land.” Phil never took for granted the freedoms afforded to him by the citizenship he received to our country a week shy of his 18th birthday. He felt civic duty to serve and to vote. While he was not a combatant in any sense of the word, he proudly donned the United States Air Force uniform every day of his working adult life (he enlisted when he was 18).  Many others have worn the uniform or are wearing the uniform because they feel a sense of duty, loyalty, and love for all that this country offers.  They simply stand for something beyond themselves. 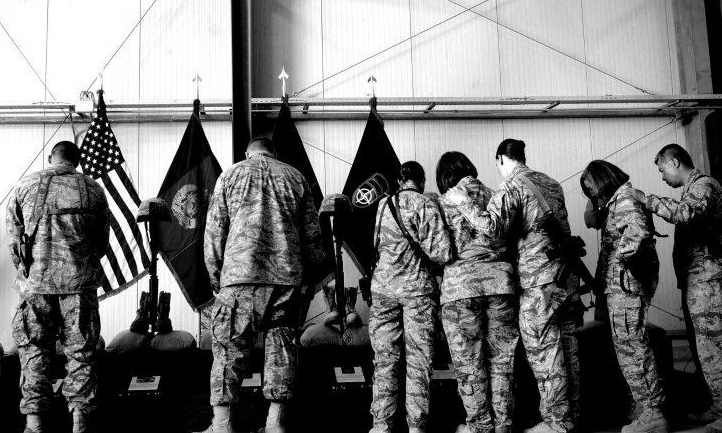 As a nation, we have grown complacent in our freedoms and the responsibilities we carry to maintain those freedoms. We fail to feel a sense of compassion, empathy, or responsibility to our fellow world travelers. We look only to our needs. We forget the oppressed or the people who can’t give us something in return for our actions. Would we even recognize the hurting person standing next to us? The want or need of another human. Sometimes that need is to be touched. To be talked to. To be heard.

When I hear our country's national anthem, I picture a dirty and spent Francis Scott Key sitting in a boat buffeted by the crashing waves. I hear the loud cannons and the pops of guns around him. I smell the acrid gunpowder as it lingers in the fray of the midnight sky. I see men in tattered rags holding weapons and pressing on for the freedoms that they believed in. A society they coveted. While the war raged on and the skies filled with the smoke of the fight, Francis could not see who was winning, but he believed. He believed and had faith that all would be for what was good, true, and right. All he could do in the moment was to have faith and to pen his thoughts. I understand this total sense of lack of control and of not being able to see ahead. I understand being buffeted by the tumultuous waves as I sit in my boat. I cling to the desperation of hope and I have faith that my Phil’s death mattered to others besides myself.

While this war was not on our American soil, and my Phil was in Afghanistan as a teacher…a trainer…my Phil stood for what he believed was honorable. He stood for our battered flag being raised in the sky. He stood for the piece of cloth still waving after the attacks on the World Towers on 9/11. He stood for people who had no skills or abilities to change their own infrastructure. He chose to volunteer to go to Afghanistan for a year to effect the change he felt would bring that oppressed region hope for a better future without the violence it knows now. He stood as a man of faith willing to commit to actions. Yes, like other veterans and military members serving, he recognized the inherent risk of wearing a uniform, but he stepped up knowing that someone had to stand up.

To understand what motivated Phil, one must understand a twelve year old coming to the states speaking two words of English--”ewsa” for USA and “sum-a-team-us” for sometimes.  He arrived from Venezuela after a six year separation from his mother, father, and half sister. He arrived to a father beaten by life. Phil struggled to fit into a mainstream school.  He and I often laughed over his mastering English by watching soap operas--something I never watched. To meet my Phil, a person never would have guessed his Venezuelan/French roots (maybe with the word “Frito”). He had become an American through and through.  When the time came to retire, he just couldn't see it. He felt that he finally was in a position to give back to the military and to the country that had given him so much. After 26 years of Air Force service, he intended to stay until he was forced out. He loved it that much.

Part of what made the events of 27 April so egregious is he trusted his assassin. He enjoyed practicing his languages with this man and talking about a new day dawning for the Afghan people. He believed enough that he had me send things for the schools and for the military men he worked with. Yet, this man knew and plotted an act that can never be explained.  While it is possible he was the sole person perpetuating this vile act, it is doubtful. Does it matter at this point? Would it change the outcome? I suppose that is the area I have moved the furthest from in the past four years. It really doesn't matter. Phil is still gone. Nine people lost their lives in an act of which we will never know the full details. My shift has come in recognizing what it cost to give me, give other citizens, basic rights and freedoms. There is and there was a cost to all I value.

On Veterans Day, I remember the patriots who have given everything there is to give and I honor all those who have been willing to stand up to the bullies of this world. I am humbled by their courage to face harm and their sacrifices. What sacrifice am I able to give to change the world for others? What am I willing to give up or to do for our country in gratitude for the freedoms and opportunities that I have every day? While I do not carry a gun or go to Afghanistan, I can reach out to people here. I can see people. I can hear people. I can finally feel the pain of others. I can stand for something other than my own wants and needs. I can choose today to honor Phil’s memory and the memories of so many with my actions and my service.