That doesn't mean that I have the plague or I walk around with a scarlet letter "W" on my chest. It simply means that the man I fell in love with and married passed away. 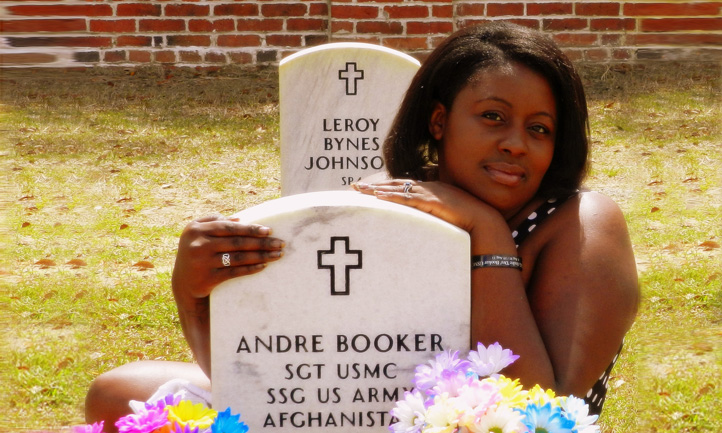 Dre was an amazing son and brother, a wonderful husband and father, and a dedicated Marine and Soldier. He put his best into everything he did and was greatly appreciated for it. He left behind a legacy and memories to be honored and cherished. And he left me behind - his widow, Shanette Booker. I went from being a wife and mother to being a widow and only parent.

Normally when given a title, I know just what to do in the position, but not this time, not this one. I have been a widow for more than three and a half years, and I still don't know exactly what "being a widow" means. I have been approached and asked by several people, "What's it like being a widow?" My response is normally, "I miss my husband, but I am okay."

But the truth be told, "Widow" is just a title; it's not a life sentence. And it's not the end of the world. It's just the opposite; it's the start of a new journey and a new adventure. It's scary at times, but it's how you face those moments and carry on that matters.

It's up to me to keep Dre's legacy alive by sharing his story and living my life to the best of my abilities. His life came to an end, and it pains me every day to know he's no longer a living part of this world. But being the widow of SSG Andre Booker doesn't mean that I am sentenced to a life of darkness and despair.

Dre fell in love with and married me because of my smile and the happiness I brought to his world, for all the positivity I had inside me, and those are the reasons that I will not allow myself to be sentenced as a widow. "Being a widow" doesn't mean I have to stop living as I once did, it just means that I have to adjust to the changes that have taken place in my life because of his death.

So next time someone asks me about "being a widow," I will proudly answer that I am Shanette Booker. I am a widow. It's not who I am; it is what I am, and I am also a proud mother, a great sister, wonderful friend, and still the wife of the late Andre Booker.

I have a life to live and I am not going to live it consumed by a title or by death. Our children still need me and they still need to know who their father was and how he lived, and I am that link for them. I will not let his death end his life or mine for that matter. He shall live on as long as I live on. And even after I am gone, I know that his legacy will carry on through our friends and family's memories.