The stretch of time between Father's Day and the anniversary of my dad's death is a rest stop along my journey each year. I was eight months old when my dad, Army SSG James C. Doloughty was killed in Vietnam. He served in Alpha Company of 1st Battalion, 502ndInfantry, 101st Airborne Division. My dad stepped forward to rescue the wounded, until he himself was wounded, in an ambush on July 8, 1969 in the foothills west of Tam Ky. He died the following day in the 27thSurgical Hospital in Chu Lai. At this rest stop, I spend a lot of time trying to piece together the man my dad was. 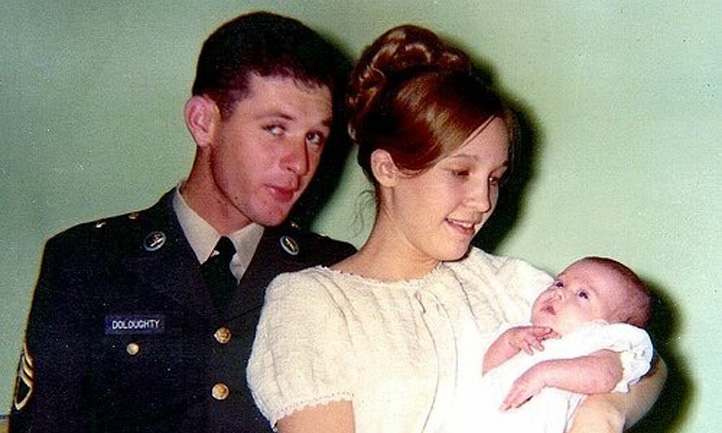 Memories shared by those who grew up with my dad help me do that. Last year, a man remembered my dad letting him wear his jacket on a chilly night at a high school football game. Men who were in combat with my dad have told me he made sure they had dry socks and enough ammunition. My dad wrote letters to my mom encouraging her to learn to drive and establish credit. He wanted me to learn how to swim. And he wanted to go back to college to study journalism. However, it turned out I was the one who landed in journalism, working at a newspaper as an online graphic designer.

In 2002, Veterans Day would mark the 20th anniversary of the Vietnam Veterans Memorial. A Reading of the Names was planned and my dad's name would be read on November 10, my birthday. I had never been to the Wall. I knew I needed to go but I was terrified. I talked with the paper's writing coach, Peter, who asked, "why not write about it?" I had never written anything for the paper, but with Peter's encouragement, I did. I had a lot of encouragement from other men in the newsroom, as well.

Reg, a columnist and Vietnam veteran, was one of those men. One day in 2005 Reg suggested I meet some friends of his that night for dinner at a local Italian restaurant. Thinking of the food, I walked into the restaurant and met a group of mostly veterans who built schools in Vietnam. They were planning a Vietnam trip for March 2006 and asked me to join them. And I did! I was able to travel to the area where my dad had been wounded. Fearful to arrive there, I felt an overflow of peace and warmth and love once I had. Now that I had made it to that point in my journey, I wanted to find a way to help others on theirs.

Leaving a newspaper for a hospital helped. It felt good to be a part of a team caring for others. I had heard about TAPS, and I had wanted to volunteer at the National Survivor Seminar and Good Grief Camp, but I was afraid. Eventually, I worked with a surgeon named Mark, who nudged me out of my comfort zone with suggestions like these: Edit a book chapter. Build a web site. Go on a mission trip. So I signed up to be a general volunteer with TAPS in 2012 and my first assignment was as a greeter in the hotel lobby at the National Survivor Seminar and Good Grief Camp. That's when I learned other people shared my fear of walking through those hotel doors! I was so humbled by the understanding and love and acceptance shared by everyone in the TAPS family.

I like to think my dad helped me to see him through the actions of the men who've stepped forward for me. And I hope by encouraging others along our shared journey by volunteering with TAPS I've found a great way to honor my dad.