As a little girl I dreamed of marrying a Marine like my dad, and going to the Marine Corps Ball dressed as a princess. I remember seeing the photos and videos of so many balls growing up and imagining what it would be like when I finally got to attend one with my very own Marine. 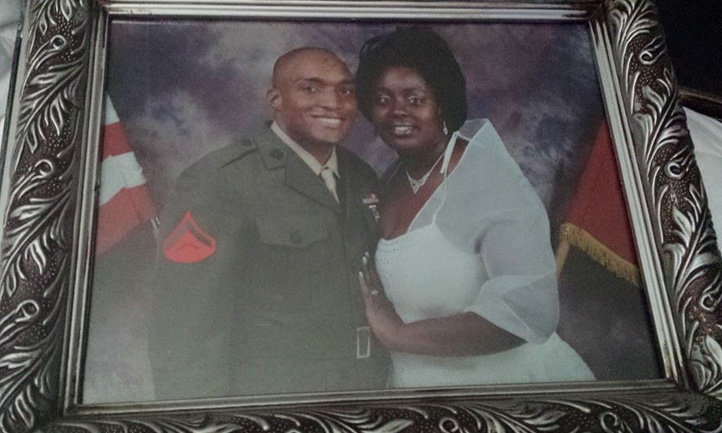 I remember going to the ball a few times right after high school with my dad and a few friends, but there is nothing like going to the Marine Corps Ball with “your” Marine. There’s something about walking into the building and being surrounded by Marines, both old and new, that just gives you a deep rooted appreciation for our military and the many years of dedicated service and protection the Marines have provided our country with.

Dre and I were married just a few weeks before the Marine Corps Ball, and were so excited to attend our first ball together as husband and wife. I watched him prepare for weeks to make sure that his uniform had all the necessary and correct ribbons on it, that everything measured out correctly, and most importantly making sure that it fit; he tried his uniform on at least twice a week to make sure everything was perfect. He didn’t want anything to go wrong that night.

When we got married, Dre refused to wear his uniform for the ceremony. Since my wedding dress was perfect for the ball however, we decided that it was ok if I wore my wedding dress to the ball and we would take photos and make it feel like our wedding…again.

The Marine Corp Ball is not your ordinary ball, and is far from being like a prom where everyone goes for photos and a dance. Instead you go to represent the honor and the legacy of the Marines. You watch as the story of the Corps is discussed from the beginning in Tun Tavern, to the many uniforms throughout the years. Then there’s the cake cutting ceremony, which brought tears to my eyes to watch as the first slice was given to the oldest Marine present and then passed on to the youngest, as a symbolic gesture.

Dre and I enjoyed a wonderful meal together and then danced the night away laughing and joking with his fellow Marines and their dates. It was definitely a night I will always remember.

I never understood the family bond of the Marines until I attended the ball with Dre and watched the history unfold before my eyes. The way each and every single Marine in the room sat silently listening to the history of the Marine Corps (some have heard that story several times prior), the way they stood proudly as the colors were presented, and how they all came together laughing and sharing their stories of duty stations both past and present with the elders in the room, it just does something for the soul and makes you appreciate our United States Marine Corps and our other military branches that much more. These men and women sign their names on the dotted line and raise their right hands not for the pleasures and joys of some ball, but because they know there is a greater and deeper connection that comes from being in the military.