Nobody tells you how much grief is going to hurt.

Although I am a marathon runner, I had to fight for each and every breath I took after Phil died. I woke up from a few stolen minutes of sleep with my bones aching and my body heavy.  I went to bed exhausted and weary, but as soon as I close my eyes images began to torment and rob me of even more sleep. I’d think of my loved one, and the swollen knot in my throat would reappear, tears would flow down my face as I lay paralyzed with grief.  Mind clouded by exhaustion and grief, every day was another battle to accomplish my responsibilities.  To make matters worse, everyone seemed to think they understood what I was going through. Friends would suggest I “get over it” as if it were a simple as flicking a light switch. 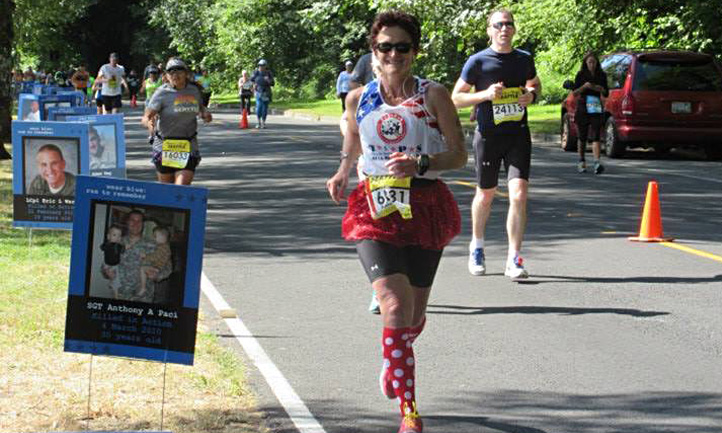 At first, it felt like nobody understood the many losses I was grieving: my community, my place in society, my family, and my husband.  I began to write about my feelings. It allowed me to purge what I was fixated on and once I wrote, I was able to let the feelings go. I joke that I am an accidental author, but writing gave me a voice and a way to make meaning from the unthinkable. That ultimately led me to TAPS.

From the start, people wanted me to numb the pain with alcohol or sleeping pills. Perhaps the sleeping pills would have helped, but I worried that I might be tempted to take too many.  Every doctor’s appointment I went to, the medical staff offered me both antidepressants and sleeping pills.  I was grieving and functioning, but they automatically assumed that I wanted to numb the pain. Friends suggested I try drinking to numb the pain, but it seemed counterintuitive for me to start drinking with a shattered heart.

I unknowingly found what would help me the most in my darkest hour. I knew something bad had happened when I saw those blue uniforms. I was so overpowered with grief I barely listened to the devastating news they told me. I thought to myself, “how can I claim to have faith if I turn from it when I need it most?” I wasn’t fully aware of it at the time, but it was then that I turned to my faith to console me. My spiritual resiliency does involve some church elements, but it's so much more than that. I decided that if I let this kill me inside, it would be a disservice to my husband. I simply couldn’t afford to lose any more to this tragedy.

Sometimes I have to fight for my happiness; by choosing not to let the death of my loved one destroy me, I honor their life even more. I honor Phil for the beautiful soul he was.  I push ahead and help light the way for the families now going down the path I have walked.

I decided to lace up my running shoes, despite the fact I could barely stand up. I pressed on hoping that if I could get outside, I would feel better temporarily.  I didn’t have to talk and I wasn’t surrounded by all the things that had defined Phil’s and my life together.  Running was the first place I felt happy.  While running, I felt normal, and those moments were lifelines when there was nothing else.

Four years out, I can say that this journey is like a marathon.  It still hurts.  A marathon runner knows that somewhere in the 26.2 miles that they are going to want to quit. But by focusing on the next step it will eventually lead the finish line. The runner looks forward to the pride and satisfaction they will feel as they take back their finish line.
Related Articles: