Music has always been an important part of my family. Some of my earliest memories of my father involve him singing and dancing in the kitchen while making breakfast. I remember my mother playing the cassette version of Garth Brooks albums in her minivan driving me to school in the mornings. Don't get me wrong, I cannot sing to save my life, but that has never stopped me from singing along, horribly, while driving or in the shower. 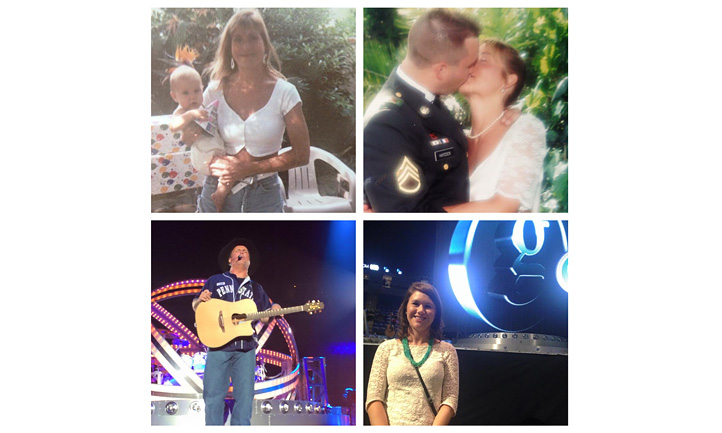 One of the most significant memories I have of music though was a few weeks after my father died when I was 10 years old. My mother and I were driving around town in my dad's old Mustang convertible with the top down, and Garth Brooks' "The Dance" came on the radio. We had always loved the song, but now it had a greater meaning. The lyrics, "And now I'm glad I didn't know the way it all would end, the way it all would go, our lives are better left to chance, I could have missed the pain but I'd have had to miss the dance," described how we were feeling about the sudden loss of my dad. From that point on, every time "The Dance" came on the radio we knew it was a sign from my dad. As much as we missed him, we were grateful for the short amount of time we had with him.

My mom and I made a pact that some day if Garth ever went on tour again nothing would stop us from going. It was the number one item on our bucket list. We never had the chance; she completed suicide on April 25, 2011, on what would have been her and my father's 19th wedding anniversary. I played "The Dance" at her funeral, and every time I hear it, I think of my parents.

Angelversaries are always hard. I spent the first three for my mother hiding in a room waiting for the day to end; however, this year, for the four-year angelversary, I got a God wink. A few months ago, I learned that Garth was going on tour again, and I immediately knew that I would have to go see him in concert for my mother. I did not, however, anticipate the date. He was going to be three hours away from my home on April 25, the four-year angelversary. I immediately knew that this was the concert I was meant to attend and instead of hiding in a dark room this year, I would be fulfilling a pact my mother and I made almost 13 years ago.

The day of the concert came and I was so excited and sad at once because I knew my mom should have been there. This was our thing, but I was fortunate enough that my boyfriend was coming with me to support me. Before the concert began, an older man stopped me and informed me that Garth does not sell the front four rows of tickets, and instead upgrades fans who already bought tickets. He asked if we were interested in being upgraded to fourth row. I burst into tears. I told him it was the number one item on my mother's bucket list, and it was the anniversary of her passing. He was so emotional, that he said, "Let's give you front row center tonight so you can honor your mother in true style." I was able to listen to Garth sing my mom's favorite song from less than two feet away. It was, by far, one of the greatest experiences of my life, and I know that my mother facilitated this.

Signs from our loved ones come in all shapes and sizes, and this was the largest one I have ever received from my mom. I could physically feel her presence there, and I know that those tickets were a gift from her. It was her way of reminding me that she loved me, and even though I have sad days she is always there for me.