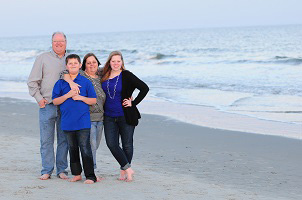 We are coming up on the ten-year anniversary of my brother's death, and I simply cannot believe it's been that long. Seriously, where did the time go? And who the heck am I now? A decade of rolling emotions have reshaped me into someone else…and I haven't yet decided whether I like her.

I remember learning in my college psychology classes that there were only six basic emotions in the human population: anger, disgust, sadness, fear, surprise, and happiness.  I don't remember the details, but I do know that I bought the theory - hook, line, and sinker. But now? Now, I have a hard time believing there would be only six hundred emotions, let alone six. I'm sure there's some truth to the theory that all emotions sprout from this small handful, but I feel as though the gamut I've experienced since Michael's death vine out from feelings that haven't even yet been identified. But there is this one emotion that holds all of these together in its clenched fist and forces me to think about it often. Guilt.

And then there's the here-and-now. I should think about him more, visit the cemetery more, smile less, forget nothing, remember more. Guilt is an unrelenting beast that can suck the joy out of every tomorrow.

Who needs a judge or jury when you're a survivor, right? We have a litany of "would have, should have, could have" running through our heads at any given time. But here's the thing I'm learning about my self-imposed guilt; it doesn't honor my brother.

I know that I will never be one hundred percent happy ever again. I promise you that. But I can choose joy. I can choose to hold tight to the little moments and let them build a new life. Not a life void of memories but a life built on the knowledge that his death made a difference. And more importantly, that his life made a difference. He changed me because of who he was and because he loved me, not because of how he died. I can best honor him and his sacrifice by choosing how I live each day now.

Guilt. Regret. Sorrow. They all have their place. But so do joy, humor, and forgiveness. I have countless emotions to still work through, but I know that guilt should be the least of them. Easier said than done, of course, but it's a tangible goal for me.

Maybe I do like this new me. Just a little. But I'd much prefer I never had to meet her.