On September 2015, I had the great pleasure of representing TAPS at the Points of Light National Day of Service and Remembrance held at the Washington Monument. Being asked to be a storyteller to the 5th graders of Harriet Tubman Elementary School was a great privilege and honor. 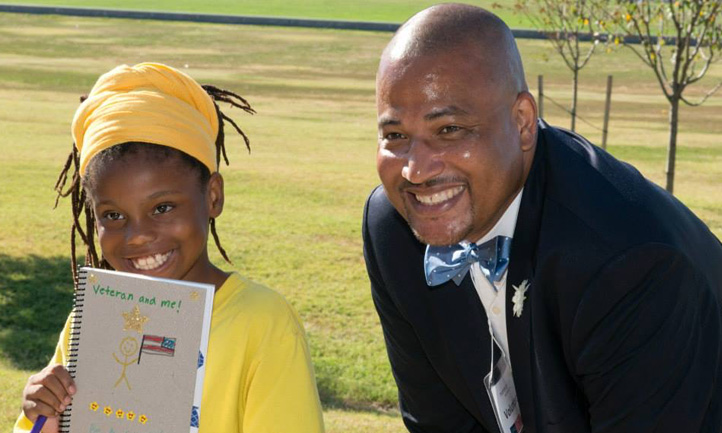 The title of my story was, Believing in Heroes. I asked the children during my story, what is a hero? Is a hero a cartoon character like Superman or an athlete like Michael Jordan? My group all agreed that both examples are heroes. I asked them if they believe that a family member who helps them all the time could be considered a hero? They said, "Yes". Heroes come in many shapes and sizes. My heroes are the men and women of our armed forces and their families. The hero who means the most to me is my mentee who had to endure what she did because her father paid the ultimate sacrifice for his country.

During my story, I spoke to the children about the seven Army values. For thirteen years I had the distinct honor of serving in the United States Army. These values became near and dear to my heart and provided me with a road map for living life.

Put the welfare of the nation, the Army and your subordinates before your own. Selfless service is larger than just one person. In serving your country, you are doing your duty loyally without thought of recognition or gain. The basic building block of selfless service is the commitment of each team member to go a little further, endure a little longer, and look a little closer to see how he or she can add to the effort.

I ended my story with poem written by David Harris titled Unsung Heroes:

Everyday somewhere in the world, another unsung hero is born. Someone who is willing, to lay his life on the line to save another living creature, on this wonderful planet of ours. To go out of their way, and risk life and limb to save something, from danger and certain death. These unsung heroes don’t want medals, glory or even fame. In fact, most would walk away afterwards, without anyone ever knowing their name. It is not that they feel guilty. They just feel that they haven’t done anything that is special or something someone else wouldn’t have probably done. Therefore, to all those unsung heroes this poem is just for you. For all the lives that you save each and every day.

For more information on the 9/11 Day of Service, visit www.pointsoflight.org.