Eight and a half years after Chris’ death in Afghanistan, had anyone told me I would be still struggling to find a sense of normalcy, I would have laughed at him or her. Had anyone told me I would be struggling with anxiety some days that almost swallows me whole in one gulp, I would not have believed it. Up until two years ago, I had never had an ounce of anxiety or experienced anxiety or panic attacks in my life, not even for Chris’ funeral or burial (remember many of us go into frozen and get it done mode). 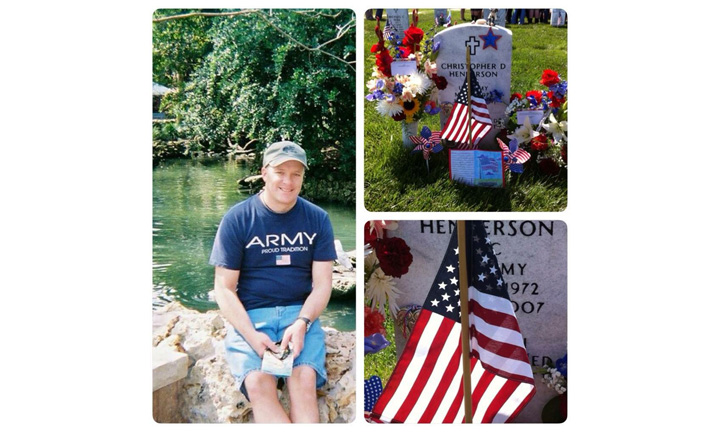 Over the years, I got caught up in the belief grief gets better with time even after having been told this is not the case in many group sessions through various organizations.  I managed to convince myself I would somehow return to a sense of normalcy after the five-year mark. Boy was I WRONG! Today almost nine years after Chris’ death, I struggle with strong anxiety and panic attacks that started about two years ago.  They didn’t start in the beginning after Chris’ death when one would think they would. After all the crappy stuff only happens to us in the beginning right after they die right? Yep you guessed it. That’s another one of those huge grief myths. For me the anxiety crept into my life slowly and took a deep root so that by the time I realized it was there, it had such a strong hold it almost suffocated me. I was afraid to reach out for help and admit after having pulled myself up by my bootstraps for so long I was now unable to do that any longer on my own. I mean really do I want to be seen as the crazy widow.  “Anxiety . . . What anxiety?!?” . . . is basically what I told myself for a couple of years.

The truth is I am not crazy. I am not alone. There are so many of us going through the very same thing years out after our loved one’s death, (yet we are so afraid to tell others). The truth is it’s okay as long as we don’t let it defeat us.

I did end up reaching out for help because I refused to give up. I refused to let my anxiety and isolation swallow me whole. I am starting to allow others to help me hold the other side of my bootstrap up while I continue to hold one side. Over time I know I will be able to hold both straps up again but for now it’s okay to have help. It’s okay for me to be back in counseling and working hard on the anxiety and isolation. It’s okay for me to be working with a health and wellness coach set up by military one source because I now want to do a 13-mile memorial hike in April. It’s okay for me to be speaking to a career and education counselor through Military OneSource (thanks TAPS for directing me there) so I can figure out how to best help others in some sort of sports therapy realm. It’s okay for me to start making a new normal again . . . almost nine years out.

If there were one point I could convey to others struggling with their grief it would be this. There is no normal. The normal you once knew is gone. It’s gone forever. It’s okay to admit that to yourself. Yes there may be a new sense of normalcy but only YOU can define what that is. Don’t be afraid to ask for help in getting there either. The new normal will come with its own set of challenges and obstacles. The new normal may come and go and you may have to find two or three sets of new normal for you and that’s okay. As long as you keep picking yourself up, dusting yourself off, and driving on (sorry for the Army term there) then it will be okay. I have no doubt one day with continued counseling and help that I can say “Anxiety . . . What anxiety?” and it not be in a denial state but rather a conquered state!