Picking up the pieces after suffering a tragic loss is never easy. Thankfully, our military families don't have to walk through grief alone. The Tragedy Assistance Program for Survivors (TAPS) walks beside them.  As it does each year, TAPS honored one survivor of a fallen service member with the Senator Ted Stevens Leadership Award at the TAPS Honor Guard Gala. This year's honoree was Nicki Bunting. 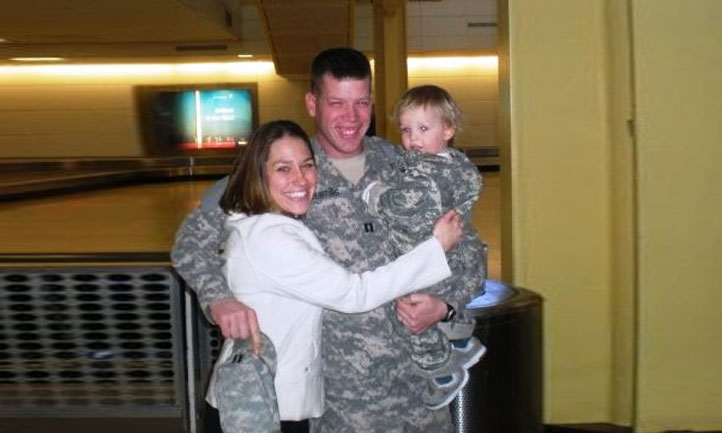 Nicki and her husband, Army Captain Brian "Bubba" Bunting, grew up in the DC area where he was a star athlete and West Point graduate. He deployed in 2008 with the 27th Infantry Brigade Combat Team. His vehicle hit an improvised explosive device shortly after he returned from R&R at home in the states. On February 24, 2009, Nicki received the terrible news that Bubba had been killed in Afghanistan. Her first thought was, "our son is going to grow up without his father." At age 29, she was a military widow and planning her husband's funeral.

Four days after her husband died, she found she was pregnant with their second child, affectionately known as an R&R baby. "Knowing that I was pregnant with him was what gave me the strength to keep going," said Nicki. "It just brought so much joy to me."

But the future was radically different from what she had planned. "I don't get to be Bubba's wife anymore, not in the way I planned it. I do what I can now to honor his name and take care of him."

Only months after her husband's death, she founded a 5K race and named it "Bubba's Belly Run," to honor her late husband. TAPS and other organizations benefited from proceeds, but the race also helped the public better understand the sacrifices our military families endure.

Nicki also got connected to TAPS, which helped her with benefits questions and offered peer-based emotional support. "TAPS has always been there to answer my questions. They have been there for me logistically and helped me emotionally- a truly wonderful resource," said Nicki. "I feel like I have a piece of normalcy back. I don't feel like an outsider."

Today, Bunting is a busy single mom to two active little boys, but she also takes time to help other grieving military families. Nicki says it helps her to give back. "I know that when I was in my worst of times, I needed a lot of support and to be able to support others when they are in need, it helps me too," said Bunting.