Cody started his life out with an uphill battle. He was born eight weeks premature and showed from the very beginning of life that he was a fighter. He was so small and fragile. I wanted nothing more in life than to protect him. I had no idea what greatness lay ahead for Cody. He was our first born child of three children and our only son. He had these piercing blue eyes and bright blonde hair while growing up. He certainly knew how to keep smiles on the faces of those around him. He was a happy child for sure. He made others laugh by his goofiness like when he would throw the guts of the pumpkins out on to the dogs while we were helping him carve his pumpkin! At an early age though Cody showed such compassion for others and loved unconditionally. 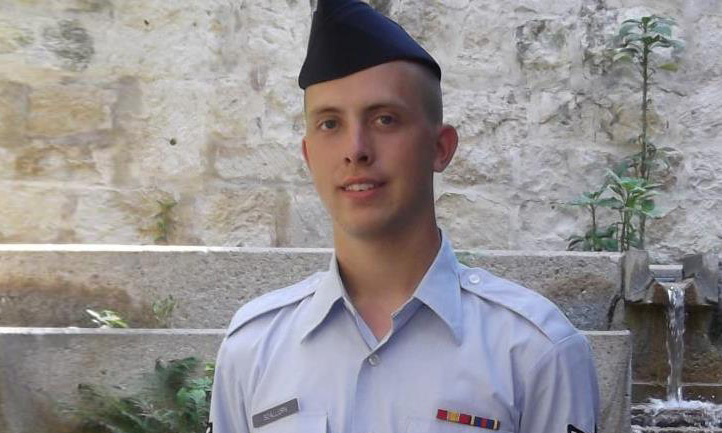 Cody, at the age of ten, had always wanted to be part of something greater in life. His compassion and willingness to serve others led him in the direction of wanting to serve in the United States Air Force. During his high school career he participated in the JROTC program and excelled in it. He knew at that point that he wanted to join the military and went into an early enlistment program at the age of seventeen.

He worked hard at school and had a part time job throughout high school. He was liked well by all and showed far more compassion for others in life than most adults do. He inspired and encouraged those around him to become better people and to follow their dreams in life no matter how big or small. Cody may have had a short time here to grace this earth but made an impact on those who were placed in his path.

His hard work and dedication paid off. He completed and graduated high school an entire year early to pursue his dream of becoming an airman. Cody left July 5, 2011 for basic training to Lackland AFB in San Antonio, Texas. He completed boot camp and technical school in the field of security forces. Upon technical school graduation he came home on leave to spend time with his family and friends.

On December 31, 2011 Cody came home after being out with some friends. He said he had received a call from his commander and had to go back to his base earlier than expected. He had to leave the next day. I was so upset that night as I was not ready for him to go back. I gave my son his last hug on January 1, 2012 before he left to leave to drive back to Texas. Unfortunately, the morning of January 2, 2012 my son took his own life at the age of eighteen. After an investigation into my son's suicide, we found that he had gotten himself into some minor legal trouble unbeknownst to us. Cody had never been in trouble before this incident, and we know that the last phone call to my son was from his commander within minutes before my son completed suicide. No drugs or alcohol played a part in my son's death, and there were no warnings before his suicide. It is believed that Cody took his life out of fear of possibly losing his career in the military. It should have been the military's first and foremost responsibility for Cody to make it back to Lackland AFB safely.

Hearing the words that our son was found after he had been missing for two days and that he had taken his own life brought me literally to my knees. My breath was taken from me and I could not even begin to comprehend the reality. My son loved us all so very much. How could he do this to us? Why? Those questions haunted me for at least a year into my grief journey along with a million others. I felt like I must have failed my child in order for this to have happened. I was naïve to suicide thinking that things like this don't happen to families like ours. I was uneducated about suicide before my son's death and even more so about the high suicide rate among veterans and active military. In 2012 alone over 349 soldiers took their own lives which averages to one every 25 hours. A staggering epidemic that has been plaguing our military in the past several years. It is estimated 22 veterans a day take their own lives as well.

Immediately after my son's suicide I felt very alone on my journey. Just trying to function day to day proved to be quite difficult as all I could concentrate on was my last moments with my son and the last moments that we shared as a family of five. My family dynamics were forever changed. I no longer had a living son and that was a very hard thing to come to terms with. I went through denial for quite a while as it was easier to pretend that Cody was away at the base. I tried to stuff down my emotions on a daily basis only to have complete meltdowns. I couldn't concentrate even on a simple task or conversation. Life had become almost unbearable to live. It was hard to be the wife and mother to my two daughters as my grief consumed my whole being.

About four months after my son's death, I was on a mission to find someone who had gone through a similar situation as mine. I was desperate to find a connection with others who had experienced a military suicide. That is when I found TAPS (Tragedy Assistance Program for Survivors). TAPS is a not-for-profit organization that was founded by Bonnie Carroll in 1994 after she had lost her husband in a military plane crash in Alaska in 1992. It is a peer-based support system that provides 24/7 emotional grief support and resources for all those who have lost a loved one in the military regardless of relationship or manner of death, including suicide. TAPS was where I could openly expressed my emotions and love for Cody and the immense grief I was feeling. It is also where I received the emotional support, love and understanding of my loss. TAPS offers seminars, retreats and Good Grief Camps for children. My husband and I have been able to attend two seminars; one was specifically for suicide and my daughters were able to attend the Good Grief Camp. These seminars are so helpful as they offer many different workshops pertaining to your grief and journey. Since I came to TAPS in May 2012, I have been able to not only receive help for myself in my grief journey but also have been able to provide emotional support and understanding of the newly bereaved as well. I recently completed the training in November 2013 to become a peer mentor for TAPS. It is an honor to be able to give back what has been given to me and my family. I have also done a national radio interview on military suicides as well as help bring awareness to this subject back in December 2012. Cody's picture has adorned the "Love Never Dies" quilt the past two years which is used throughout the state of Tennessee in awareness and prevention programs for suicide.

It has now been a little over two years since Cody took his life. I have learned that the pain of losing him to suicide will always be there, but the pain changes as the time passes. I am able to look forward in my future with my daughters and husband and I hold on to hope. I am not the same person I was prior to Cody's death, and I used to long for the woman I used to be but have learned to accept who I have now become. I have found joy in my life again, and I am grateful for all of the small moments I have with my family. We are all survivors on our own separate journey. My life mission is to continue to keep his memory alive, bring awareness to others of suicide and hope to those of us who are living through the loss.