TAPS is a community of survivors.  Some of us have lost loved ones on the battlefield, others to long-term illness.  Some TAPS survivors, like me, have lost someone they loved in tragic accidents.  My children and I are somewhat unusual as TAPS survivors, for not only have we suffered through the sudden and untimely death of my husband, we also survived the same car accident which claimed his life. 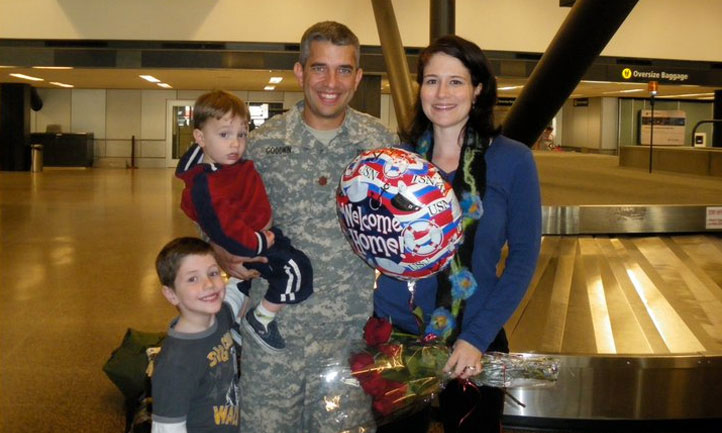 My husband Robert Goodwin was a 1995 United States Naval Academy graduate and a 1999 graduate of Georgetown University School of Medicine.  He completed his residency training in Emergency Medicine at Naval Medical Center Balboa in 2006.  More importantly, Bob was my husband and a devoted father to our two sons Christopher and Paul. In 2009, he spent nine months as an individual augmentee with a fast response medical surgical team in Shindad, Afghanistan with an Army Special Operations unit.

Upon returning from deployment, Bob was selected to become the Chief Medical Officer of the USS Blue Ridge, the flagship of the Navy's 7th Fleet.  Bob and I were thrilled to be going to Japan and wanted to celebrate Bob's new assignment by taking a cross country road trip to visit some of the national parks.  The day after we packed out to leave for Japan, we left Bremerton, Washington (our previous duty station) and set off for our cross country trip which would end in Northern Virginia where my parents live.

The car accident occurred about five hours into our trip.  Bob died nearly instantly. Our older son Chris (then 6 years old) suffered a neck injury and was airlifted to a pediatric trauma unit. Our younger son Paul (then 2 years) sustained a head injury and I did as well. In an instant, I was catapulted into a living nightmare: my husband had died, I had no home and my older son faced an uncertain future.

I am thankful to write that both Chris and Paul have recovered from their injuries, although the emotional scars of losing their father will forever remain. I returned to live with my family in Northern Virginia a few months following Bob's death to start a new life. It was a scary and unfamiliar life - one without the Navy, the companionship of my husband or even the comfort of my own belongings (which the Navy graciously allowed me to keep in storage while I sorted things out).  I knew I suffered from PTSD and my children did as well. As time went on, I realized I couldn't make it without support of people who understood the terrible pain I had endured.

I eventually turned to TAPS after reading an article in its quarterly publication. In that particular article, Kim Ruocco shared the story of the tragic loss of her husband to suicide. The honesty, openness and compassion Kim conveyed while describing her experience of loss left me awestruck. I decided to contact TAPS immediately to see if they could help me navigate the horrible grief I drowned in every day. TAPS immediately jumped in with open arms to help me and my children on the journey to recovery.  I was assigned two peer mentors who contacted me religiously for months to check in on me. I also began attending a local TAPS care group where I found friendship and support from other survivors.  Finally, in spring of 2012, I attended my first TAPS National Military Survivor Seminar.  My husband's parents flew from Portland, Oregon to attend the seminar as well.  Attending TAPS National Military Survivor Seminar provided us with an opportunity to grieve Bob's loss together as family, which was very healing for all of us.

It has now been three and a half years since Bob's death, and I am finally at a point where I want to give back to those who helped me so much in the early dark days of grief.  My proximity to the TAPS National Headquarters has afforded me the opportunity to help out with many of the day to day operations TAPS undertakes.  Last month, I assisted TAPS staff members with assembling about 60 care packages to be mailed to new survivors.  I had the opportunity to spend some time with Bonnie Carroll and thank her and the TAPS staff personally for all the wonderful help they had provided me.  The welcoming and compassionate reception I experienced as a TAPS volunteer compelled me to write Bonnie a thank you letter which I have excerpted below.

...Thank you for taking the time to listen to me and my story.  As you well know, the bereaved must, in some way, describe their loss.  By sharing our stories, we have an opportunity to connect with our grief and unshoulder it for a brief moment.  For some, sharing a loss may simply mean wearing a special button.  For the verbally inclined (like me) sharing means retelling the life, death and aftermath of losing one's loved one.   Sadly, if our stories remain untold, we risk descending into deeper isolation and loneliness.  I think Carl Jung put it best when he wrote, "Loneliness does not come from having no people about one, but from being unable to communicate what matters to oneself."  TAPS helps survivors bridge that gap by providing a safe place to speak openly about what matters so much to us: our departed loved ones…

I considered it a great honor to tell you the story of my husband's untimely passing.   After Bob's death, I started looking for heroes to give me hope and something to aspire to.  In my mind and in real life, I collected a team of cheerleaders to encourage me along this seemingly dark and hopeless journey.  You and the TAPS family quickly became members of that cheer squad - through your example I learned that I was strong enough and capable enough of surviving this horror called widowhood. I also discovered that I was not alone and that TAPS would stay with me on the journey as long as I needed them.  Yesterday, I had a chance to meet some of my cheer squad in person and it was awesome!  Thank you!

Upon further reflection, I feel another a thank you is in order at this moment.  I am tremendously grateful to all those who have read this blog entry.  As readers you have given me yet another opportunity to tell the story of the tremendous loss of my husband. It is healing to be able to write these honest words:  I dearly miss Bob and I am tremendously proud of his service to our country. Thank you for reading.