As the mom of a rambunctious elementary student, I've recently had the "pleasure" of helping him master the art of telling time. The old-fashioned way, that is - on a clock face with two swinging hands. To say this has been a frustrating process for us both would be an understatement. It seems the preference for digital format doesn't end with iPads and gaming systems but rather, extends even to this outdated skill I seem to take for granted. 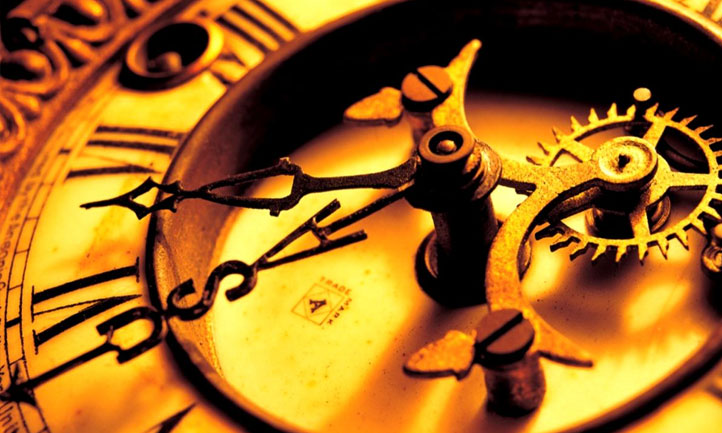 I'll show my age a bit here, but I remember back in the day when we learned to tell time by securing cardboard arrows to the center of flimsy paper plates with tiny tarnished brads. We'd draw the numbers on the corrugated edges with crayon and then see how fast we could change the time by spinning the pointy hands around the white surface. I couldn't wait for school to be out for the day, for summer to arrive, for vacation to start, for adulthood to come knocking. Real time could never keep up with those rotating hands… or with my own expectations.

If only I could turn back the hands of time now.

More than nine years have disappeared since my brother died in Afghanistan. Nearly 3400 days. Or more than 4,896,000 minutes, if I were counting.  I would give anything to have captured even one of those 17-million minutes he lived on this earth. Sealed it in a bottle, stashed it in a lockbox for safekeeping. The irony can't be ignored. All the time I once thought would never come… finally came barreling through in a frenzy, slamming the door with a vengeance on its way out.

And that, I think, is a universal truth, especially in grief. Time starts out dragging her feet, refusing to move her hands, moaning tick tock in a tormenting echo. The moments drudge by, the pain proliferates with lightning speed, and breathing seems impossible. And then suddenly, she's nine years down the road, waving those sassy hands, squealing "catch me if you can!" It's a confusing paradox that pits exhaustion against relief. And generates a new version of grief that must now battle guilt. It's just plain weird.

Early on, right after the funeral, I remember the fogginess of merely trying to remember what day it was. One day literally bled into the next, and one moment could not be separated from another. They were all just one big lumpy mass of raging red anguish. It hurt to remember. But it hurt not to remember that which I could never forget. I couldn't sleep and didn't want to. And then I wanted to sleep but still couldn't. I hurt from the sheer exhaustion of simply being awake, and the tears erupted at the slightest provocation.  Everything hurt.

So much has changed since that time. I still face some sleepless nights on occasion and even some teary days. A song will trigger a memory that might slip a smile on my face… and simultaneously break my heart all over again. I'll drive by the cemetery and feel guilty for not stopping, or I'll drop his name into a conversation automatically, and my breath will catch when I somehow suddenly remember all over again. It's not that I forgot (how could I?). It's just that I hadn't opened the door to that memory… in that moment. And to a grieving person, I think moments are all we have.  Minutes don't matter, nor do days, or weeks or months. What really matters is the moment, no matter how long that moment is. Time is not measured by the tick or the tock but by the tears we've cried 'round the clock.

Time is just a wily, independent character who can't be trusted to behave. She can't be captured, stalled or tamed, much less defined. She roars with the wind and slithers with the snail, somehow seemingly all at the same time. She passes in the blink of an eye and yet she stands right where she is. How can that be?

I miss my brother more now than ever before. It's not the sharp, stabbing pain it once was, but it's more of an aching sense of loss. It's the realization that with every moment that passes, I'm missing out on new experiences that can never be. It's not just the disappearing milestones like birthdays, holidays and anniversaries. It's also the vacations that might have been, the decision-making that evolves with parenting, the discussions about future retirement choices and the stories shared of perfect grandchildren yet to be born. I can't even count the number of times I've wanted to just call him up and talk about nothing at all. I still have his number programmed in my phone simply because I like seeing his name listed there in the contacts. As though we could somehow pick up where we left off. False hope, I know.

I've concluded that time doesn't heal all wounds. In fact, I don't think time heals anything at all. The only thing time does is put me a little further away from the pain. The greater the distance between us, the harder it is to focus and clearly see her. She's a little fuzzier, perhaps less intense, but still rooted there at the core. Like the arrows on that paper plate, I'm forever tethered to that spot where new memories stopped. I might move outward, pull at the constraints, reach beyond, but my feet will never leave the circle that encompasses that hole, punctured within the center where my heart belongs.

Time keeps on ticking, the hands swishing around her face, the old memories looping over and over again.  She moves forward, picking up speed, but never backward. It's an unforgiving circle. But it's manageable. If we focus on the moment.