TAPS extends our sincere condolences to the family of our mentor and friend Darcie Sims. We are all deeply saddened and uniting around each other as we grieve together as a family. Darcie has been with TAPS since 1998, sharing her joy and inspiring our families at TAPS regional and national seminars, and she will be sorely missed. She will forever live in the hearts of thousands of grieving military families. 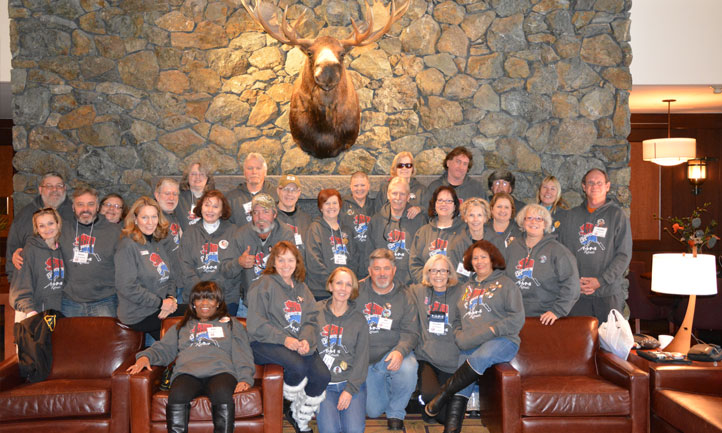 "May love be what you remember most," was her encouragement to help us look beyond our most terrible moments. We will cherish and hold close her memory and comforting words, "No light born in love can ever be extinguished." She has truly left a legacy that transforms the way America grieves, and she will be with us in spirit. We send our love and care to her family. If you need a compassionate listening ear, your TAPS family is only a phone call away. Call us anytime, day or night, at 1-800-959-TAPS (8277).

Last week, TAPS welcomed 40 parents to the pristine wilderness of Alaska for three days of adventure which included snowshoeing, dog sledding, team-building exercises and a scavenger hunt. Retreat attendees came from all across the country and have a bond like no other - each is grieving the loss of a son or daughter who served in the Armed Forces. During the retreat, they were able to share about the life of their child, form lasting friendships and find hope in knowing that they are not alone. These common bonds make TAPS retreats unique and healing. We encourage you to read about and watch videos of a few of the experiences our TAPS parents had during the retreat- "Families of Fallen Soldiers Travel to Alaska to Heal" by KTVA and  "Families of Deceased Soldiers Heal Through Alaska Adventure" by KTUU.

On Sunday, the TAPS Run and Remember Team participated in the Army Marathon, Half Marathon and 5klicks Run near Fort Hood, Texas. It was a day of inspiration as our runners celebrated the lives of their fallen heroes. We thank all who ran and cheered on our runners!

The new issue of the TAPS Magazine arrived in mailboxes across the country last week. A few of the featured articles include "Twenty Years of Hope and Healing," and "Attending TAPS Events: Encouragement for the Newcomer." News about TAPS Military Survivor Education Support Services is also highlighted. The magazine is available online; you can also subscribe to the TAPS Magazine.