There are so many ways to honor our loved ones with service to others. Jill Stephenson, surviving mother of Corporal Benjamin Kopp wrote an article in the TAPS magazine titled Traveling with Wreaths Across America. She created a written image of the convoy that goes each year from Maine to Washington, DC to bring the wreaths made by Morrill and Karen Worcester to Arlington Cemetery. She described the ceremonies along the way as she traveled through eight states to beautify the graves and give comfort to family members who may not be able to make the trip themselves. 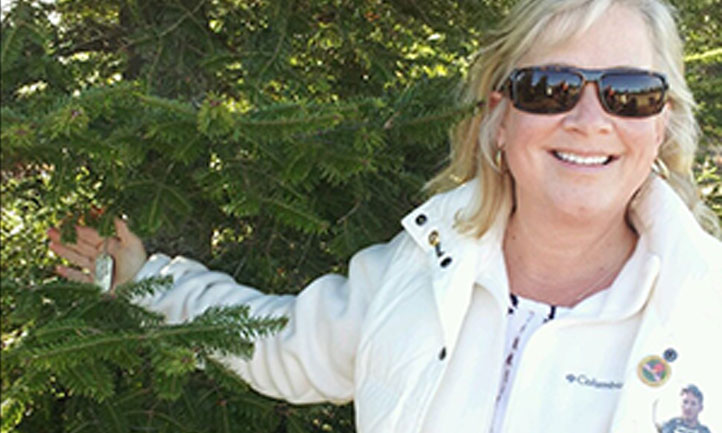 This week other survivors have written about what they do. Their stories are full of courage and the emotions they have as they serve others while celebrating the lives of their loved ones adding to their healing at the same time. Thanks to all who participated this week as well as those who read the Saturday message. Together we can make a difference.

Some survivors experience an extraordinary incident or some people may call it a sign or a God wink. Sarah, a survivor, thought it would be interesting to share your favorites in a Saturday Message. The discussion topic for this week: Share a time or event when you  felt the presence of your loved one.

I invite you to respond to this week's question or share a topic you would like to ask the group. All messages come directly to me either by replying to this message or sending an email to carol.lane@taps.org. I would love to hear from you anytime about anything. Sometimes writing to someone can be helpful.

From Merry, mother of Wesley: Healing continues in various ways and most likely will take a long amount of time.  A year after grieving, I joined a church choir and felt at times very close to Wes when the choir was praising collectively on Sunday morning.

During my second year of grieving, I've begun to venture out into the community and have found myself completing a Citizen's Academy with the local County Sheriff's Office.  AND---I'm not EVEN the oldest attendee!!  This has been a most amazing and rewarding academy not only for my healing, but to learn how the community is protected by a great group of officers who risk their lives every day.  We gave 40 hours of our time, but they give 24/7 hours of their time.

I've also been volunteering with a Congressional campaign, a state Attorney General campaign, and have made sure to be up on issues surrounding this midterm election.  Wes fought to defend our U. S. Constitution. Shouldn't I keep my little patch of neighborhood continuing to keep the best persons in office?

I'm keeping to very structured legal venues of everyday life.  I need that I guess, but I also raised two U. S. Marines and my daughter-in-law is currently serving.  I guess structure of towing the line is in my genes.

From Leslie, mother of Eugene: I'm proud of two things that I have done.  One is that I had the bill to enhance the Veterans education benefits pushed into law. This gives veterans a chance to go to college.

I've also spoken in a few places on the advantages of organ and skin donation. I donated Eugene's corneas, skin and organs saving or enhancing many people. It's emotionally and spiritually gratifying.

From Kitty, mother of John: With the sudden and unexpected military death of our son, John, we have become part of the TAPS family. We had the pleasure of assisting at the National Seminar in Washington, DC. giving the families their loved ones' pictorial button. This can be a difficult time for the families and for us. It was an opportunity to speak to them and offer comfort. After peer mentor training we have been blessed with assisting individuals on their grief journeys. This year one mentee was able to take the Peer Mentor training. It was quite exciting to see the healing and her interest in helping others.

At the Memorial Day Parade, we were able to represent TAPS in showcasing our float and interacting with others to make them aware of our services.

Soon there will be a community group started by TAPS here in the Santa Clarita Valley.

On the home front we are involved in GriefShare as table leaders for those who have lost children as young as 8 months to as old as 52 years of age. We are able to guide and comfort through a 13 week series with videos and discussion groups. Many repeat the series as they might have been numb the first time around.

We have been honored in our patriotic valley by several organizations, American Legion, Prayer Angels for the Military, Blue and Gold Star Mothers, the Chamber of Commerce, our City Council, Rotary and North Park Community Church, with plaques and memorials to our fallen heroes.

From Mary-Ann, mother of Blake: I'd never thought that the loss of my child could make me have strong desires to do things I'd never done before! I'd never headed up a fund-raiser before, but now I've done it two years in a row! The last two Septembers I headed up the committee that put together our Annual Stars and Stripes 6k Patriot Walk/Run in support of my son's scholarship fund started by the community upon Blake's death. The desire to keep Blake's name alive by helping others became a 'have to do' for me! I ran into many rejections, discouraging comments and other difficulties only to make it more important that I make it work! I felt I had no choice since it was for Blake and he was not a quitter, so I could not be one either!

I've always been a hard worker, but the behind the scenes kind of worker not the upfront one! Due to my need to do it for Blake I've been on radio, TV and have done whatever it takes to promote the yearly event! I had the courage to keep going in spite of difficulties and last May we presented 3 scholarships to local high school students! This year, thanks to God, the event brought in almost twice what it did the previous year, so I imagine we will be able to help even more! It's as if I have acquired some of Blake's strength and courage to get the job done! I'm happy to say this extra strength and courage is something that is a change in me that makes me proud since I know Blake would be proud of me!