The question about jewelry brought in so many responses that there needed to be a second Saturday Message devoted to them. This week, I thought I would add what I do with jewelry. The picture is the heart locket that I wear every day. Inside is my son, Bryon's, boot camp picture. When I go to TAPS or military events, I wear other pins as well. However, the heart is always with me. 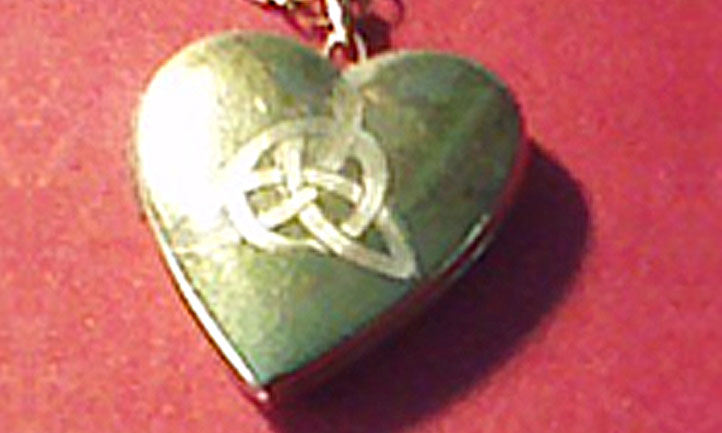 Thank you to all who responded to this question about jewelry as well as those who read the Saturday Message. Connecting together each week is a special experience as we walk this path. We are not alone.

The discussion for next week comes from Ruth. She is putting together a coffee table book and found a letter written by a friend of her son to include in the book. Ruth would like to know if you have received letters or other items connected to your loved one and how have you preserved them?

To respond to the question of the week or to share a question you would like to ask the group, you can reply directly to me by replying to this message or sending an email to carol.lane@taps.org.  I would love to hear from you anytime about anything. Sometimes writing to someone can be helpful.

From Christi, mother of Zachary: Every morning I wear my Gold Star pin.  There hasn't been a day I've gone without it since I received it.  I also wear Zack's school ring and a For the Fallen bracelet. His American Gold Star coin with his name on it goes in my pocket.  His dog tag was on a picture on my desk, but now I wear it every day too.  It belongs close to my heart.  Once in a while I go without the coin, because I don't have any pockets.  Other than that this has been a daily ritual for almost a year now.  It makes me feel close to him.

Kitty, mother of John: We are truly proud parents of John, who served our country as a medic for 15 years in the US Army, before his last duty station was changed. We have car license plates that read "JMC MDC" on one car, and "SGT JMC" on the other.

In September, in observance of Gold Star Mother's Day, the Blue Star Mothers and Prayer Angels for the Military treat Gold Star mothers in our Santa Clarita Valley to an afternoon of total pampering and gifts. Two years ago, one such gift was a dog tag replica with a photo on one side, and date of death on the other for each of the Gold Star mothers' sons which we distributed to our family members. My husband wears his 24/7. I take mine off at night. "We grieve because we love!"

Christine, mother of Adam: I have worn Adam's dog tags every day. Last year on my daughter's wedding day, I took off the one with his name on it, and pinned it inside my dress. His earring I wear in my left ear as he did. It is the first thing I put on and the last thing I take off at night.

From Georgianna, mother of Jamie:  I wear my commemoratives all the time. It makes me feel complete in God's strength to remind me of His promises that He has for my son and I. I feel honorable, compassionate, and knowing my new family from TAPS makes me feel warm, happy, whole, and normal again. I don't wear a lot, but a select few. When I see another survivor wearing jewelry, pins, or other items, I know I can ask to introduce myself, as a survivor.

Ruth, mother of James: I have two pieces of jewelry I wear all of the time.  The first is my gold star.... a friend of mine who is a jeweler made a wax form and styled my pin into a 14K necklace.  It never leaves me.   It does bring comments and depending on my mood, I either just thank them, but most generally I tell them it represents my son who died in Afghanistan.  I then let the person know who has commented that I really appreciate them noticing... It means that someone is thinking of my son.

The other piece I wear is a dragonfly pin.   It represents a story I read at my son's funeral about  how a water bug climbs a lily pad and turns into a dragonfly in a beautiful new world.  After the funeral a very large dragonfly appeared in the dining hall.  All heads were turned upward. The dragonfly flew over my head twice and left.  I know it was Jim telling me good bye and that he loved me.  I am often asked to read the same story at other funerals....  I take great pride in sharing a piece of Jim.

Jim's medals are on display in our front room along with other things he brought home. I love and miss Jim, but I know we'll be together again.

From Robert, father of Louis: I wear Lou's and my dog tags and a commemorative bracelet. Vivian wears what I do, plus his Lt bar that he wore and a unit pin from the 101 Calvary NY Army National Guard. When wearing a jacket I wear my Gold Star pin.

Virginia, mother of Patrick: We have titanium bracelets that were given to us by one of Pat's teammates. It has Pat's name, date of birth, date of death, and signature saying that was tattooed on his leg which was "Cry havoc, and let slip the frogs of war". Pat loved Shakespeare and this is a quote from that writing. Navy SEALS are sometimes called frogmen. We also had silver bracelets made by Montana silversmiths that we wear on special occasions and I have a gold Navy SEAL trident necklace that my husband gave me after Pat died. I wear it at all times and never take it off.

From Rebecca, mother of Griffin: I wear Griff's black earring posts in my ears. They never come out. Griff only wore his earrings in his civilian world. A set of Griff's dog tags is draped on the case that holds the American flag warmly given to me when Griff became one with the earth.