Going to a seminar or a retreat can be a moving experience. If you haven’t attended either, you may want to know the special qualities of each.

At a seminar, there are workshops to understand grief, support groups in which survivors meet in a gentle environment with others who have experienced a similar death, special events that are held in the local area around the seminar, and good grief camps for children with activities that are selected specially for them. Registration for the National Seminar is now open. 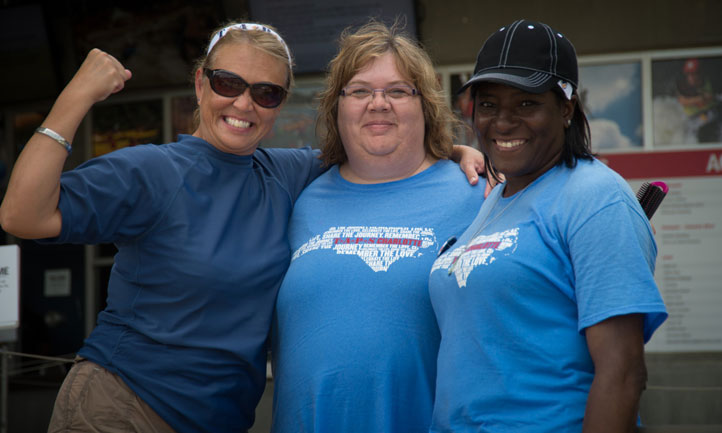 Retreats are also in different areas and the participants have the same relationship to the deceased. They are limited to a small number of survivors and registration is open a few months before the event.  The retreats are active and have a level of physical activity posted on the registration page. Group activities as well as mutual support are provided.

I hope this explanation and the replies from survivors in this message will help if you are planning to attend a TAPS event in the New Year. Please feel free to send any questions you have and our TAPS staff will find the answers.

This week on the news, I listened as the news staff talked about making resolutions. After enduring the last month, making plans for the rest of the year could prove stressful for so many survivors, so I thought I would modify this idea for the question this week. You need to take care of yourself and give yourself a gift. It doesn’t have to be expensive. Maybe you could take a morning in the local library or have coffee with a friend. For next week, let’s share something that you have done or plan to do for yourself this year that will bring you happiness. I look forward to reading your answers.

If you would like to send a response to the question of the week or have a subject that you might want to hear responses from other survivors, just hit the Reply button and the information will come directly to me. I would love to hear from you anytime about anything. It does not have to be a reply to the Saturday message. Sometimes just writing to someone is helpful.  You can email me anytime at carol.lane@taps.org.

From Mary-Ann, surviving mother of Blake: We went on the Tampa retreat for parents which left us actually feeling so much better even if only for a while. I think the best thing from that retreat was the friends we made who truly understand where we're coming from on our journey. We met and still keep in contact with other parents with whom we formed a connection on that trip. I hope there will be another parent retreat and we'll be able to go on in the near future.

From Ashley, surviving sister of Michael: When my brother died in 2006, my world as I knew it changed forever. My parents and I began a journey we never expected. I thought we were alone…that is until we found TAPS. My first event with TAPS was a siblings retreat in Seattle, WA. It was the first time I met other surviving siblings. Words cannot express how comforting it was to meet others who understood. Together, we shared about our brothers and sisters, laughed about funny things they did, and shed tears for all that we miss about them. We participated in activities together and most of all, formed friendships that will last a lifetime.

My first TAPS seminar was at Fort Campbell, KY. It was humbling to be able to be there. Fort Campbell was the base my brother was stationed at before he deployed to Iraq. The last time my parents and I were there was for Mike’s memorial service. I was not sure how I would handle being back there. However, I am so grateful my parents and I went. It was comforting to meet other families from the area. Many of those in attendance were at the seminar honoring and remembering their hero who also served at Fort Campbell. The experience was comforting and brought hope to our family. I met other siblings, parents, children, spouses, grandparents, and cousins. I had the opportunity to learn about their heroes and share with them about my hero, my brother. I listened to Darcie Sims speak and learned that my feelings were okay to feel and that my relationship with my brother would never end…he will always be my brother. Nothing can take that away, not even his death. I feel that realization was a turning point for me – when people say “You had an amazing brother.” I answer, “I have an amazing brother. His name is Mike. Yes, he died, but he will always be my brother.” Darcie helped me realize that. I am so appreciative and forever grateful.

From Robert, surviving father of John:  Two of our greatest experiences occurred at the National Seminars, one in 2012, and the other in 2013.

In 2012 while seated in the amphitheater at Arlington National Cemetery, a woman sitting behind us asked if we had any others sons serving in the military besides our son John who died in 2008. We told her of Tim who served in the Army at Fort Bragg in PsyOps and Special Forces from 1997 to 2003, and Andrew who was, and is, currently serving with the Colorado National Guard (Army.) She asked if Andrew has ever been deployed. We said yes, in 2009 and 2010. She then asked what unit and we replied 3-157 Artillery attached to the 82nd Airborne. She said she knew our last name was not too common and that was the reason she inquired. She then told us she had served with Andrew as one of ten women assigned to 3-157 during their deployment. We checked with Andrew later and he remembered her well. Sure made the world seem a lot smaller.

The other instance occurred at lunch on Saturday at the Nationals in 2013. I was wearing my "I'm a Hugger!" button and as I started to sit a lady at our table challenged me to prove it. I told her I was a World Champion and we should commence with the demonstration now! She said she wanted to finish her lunch first. As she took her last bite I told her to stand up as I had waited for her to finish and now was the time. She complied and I locked my arms behind her at the base of her rib cage. We hugged for a couple of minutes after which she said “I guess you are the champion." I excused myself to go to the restroom, a guise to find Claire Hunter to get another "Hugger" button. She found the last one and I returned to the table and asked the lady to stand again as I didn't think she had really put all her effort into the hug. She stood and we again hugged. After a tremendous hug from her I took out the button and told her she was now an official member of the "Hugger Club." Her expression is locked into my memory for all time.

We thank God for the opportunities He presents for us every day.