December 20th marked seven years since I hugged my son Charles for the last time. I remember that day like it was yesterday. We went to visit Charles at Christmas time, before he was due to deploy. 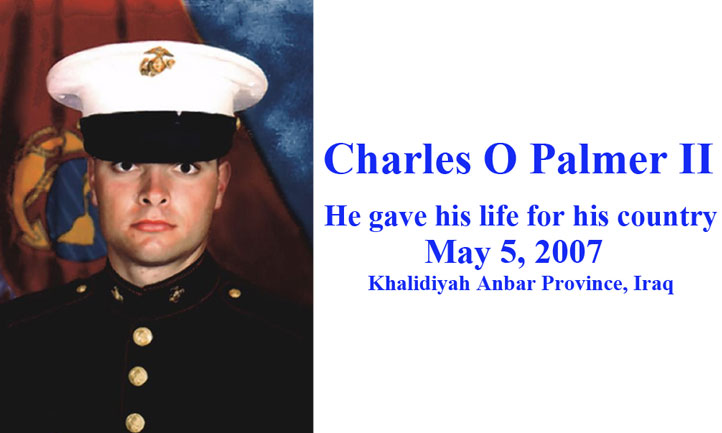 My wife and I were there for ten days.  We had a great time meeting his friends and other Marines he worked with.  I remember one day we went to a small place on base to watch football with his friends.  Marines can be rowdy during a game.

We drank a few beers and talked a lot about nothing.  We could do that together.   I could tell the other Marines liked Charles; they had no problem giving him a hard time about his "football" knowledge.  If it was a question about the Carolina Panthers or Oakland Raiders, he knew it without any doubt.  Knowledge about all the other football teams, however, was not his strong point.

During our visit, I learned much about the brotherhood my son shared with his fellow Marines.  One thing that impressed me was the way the Marines would come and visit one another.  They didn't knock on the door; they just walked in.  There was no need to say anything other than "Hi!" as they made their way to the refrigerator to grab a beer.  These guys felt right at home.

One of the Marines shared a story about how his flight arrived late at the airport.  He called Charles and told him he had no way home, and he needed to sign-in.  Charles got out of bed, drove two hours to the Charlotte airport and brought him home in time to sign-in.  Of course he said Charles complained the whole way home and told him, "Don't ever be late again!"  My understanding was that Charles would get up, no matter the time, and make sure his Marines got home safe (not wanting them to drive under the influence).

One night during our visit, he was barbequing and we just talked.  We only had a day or two left.  Charles was a little more talkative than usual.  The one thing he asked me more than once was if I would be there when he got home.  "Dad, tours change me.  I would really like it if you were here."  I promised that I would.  I wasn't sure how I was going to do it, but I promised.

When it was time to for us to leave, Charles drove us to the airport.  Yep, that was a hug to remember.  I didn't know then that it would have to last a lifetime.

Miss you son, as we all do!

Special note:  The city of Manteca in California will honor CPL Charles Palmer by naming a city park after him.  The dedication ceremony will be held in May which marks the seventh anniversary of when Charles was killed in action.