On September 27, 1966, I found myself standing in line with a room full of nude men waiting for an induction physical at 401 North Broad Street, Philadelphia, Pennsylvania.  After being cleared by a naval doctor, I raised my right hand and repeated the oath of office to defend the constitution of the United States and became a U.S. Marine Corps recruit. The man standing to my left, or should I say boy because we were both 18 years old, was Danny Conaway from Riverside, New Jersey. 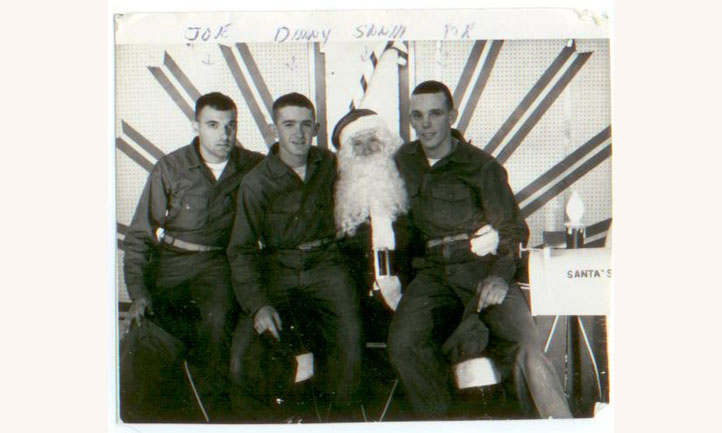 From that point on, Danny and I became lifelong friends. We endured eight weeks of Full Metal Jacket boot camp at Parrish Island, South Carolina.  We were assigned to 3rd Battalion, Platoon 3114. We were a rack apart. Danny and I survived grunt training at Camp Geiger, and we made a pack that we would always stay in touch no matter what. Danny received orders for Vietnam and was assigned to the 26th Marine Regiment. He survived 13 months, including the Tet Offensive in 1968. During those 13 months, we exchanged letters. After he returned, he was assigned to Camp Pendleton in California. We eventually lost track of each other.

Flash forward to June 2004. My son Tommy was enduring boot camp at Parris Island. Tommy and I would exchange letters; he would tell me how hard it was, and of course, I told him that he should have seen the Old Marine Corps. Soon after my son left for boot camp, I was cleaning up my desk area and I found the letters Danny Conaway had sent me from Vietnam in 1967-1968. I started reading the letters.  Some were covered in mud and others with red dust. I wondered what became of Danny. So social media being what it is, I tracked him down in his home town of Riverside, New Jersey.  Soon, we picked up the thread of friendship and arranged to meet after 36 years.

I took the letters I received from Danny so many years ago and met him at his apartment in New Jersey. I was stunned to see an apartment that was more 1968 than 2004. It was filled with Marine memorabilia. Pictures of Danny in Vietnam and at boot camp, and maps of Vietnam filled the only table in the place. It looked like the TV show about hoarders. As we spoke, Danny told me that he had lived in the same apartment for 30 years; he was married for a few years while in California, and his wife left him after their son died at birth. Dan had been suffering for 36 years from PTSD as the results of his 13 months in combat. Danny said that he had been working with the VA in Philadelphia for the last 10 years, and he was waiting for his disability to be approved. I gave him the 40 letters that he wrote to me as a 19-year-old grunt in Vietnam, and arranged to take him to the Delaware VA for another review of his condition.

In 2005, Danny was admitted to the VA hospital in Delaware for treatment of a liver disease related to Agent Orange that he contacted while in Vietnam. He told me he was exposed to it by drinking the local water when there was nothing else to drink. Danny had also been wounded twice but never received his Purple Hearts.  He said that it was pretty common to pick shrapnel out of his body, and a lot of Marines he served with did the same; after all, if you weren't missing arms or legs, or bleeding from a sucking chest wound, then you just dealt with it and moved on. Danny was also suffering from PTSD. I gave the letters he had written to me from the mud covered fields of Vietnam to the VA. After reading the letters from a 19-year-old grunt from 36 years before detailing the battles he had fought, and the death he had seen - including human wave assaults from the North Vietnamese Army divisions on Hill 861 South - Danny was finally given a 100% disability and awarded two Purple Hearts.

Danny became a friend of my son Tommy, and we traveled to Cookies Tavern in South Philadelphia together to celebrate the Marine Corps Birthday in November 2008. Tommy was suffering from TBI and PTSD from his own combat experience in Iraq 2006-2007. Danny and I were able to attend the Marine Corps Evening Parade at 8th and I in Washington, D.C. We keep in touch through visits and phone calls until my cell phone changed, and we lost track once again. I last saw Danny at the Marine Corps Birthday at Cookies Tavern in Philadelphia, Pennsylvania in November 2011. Danny looked good, and he had moved into a house in New Jersey. We parted that night and promised to stay in touch; by this time I was living in Atlanta, and I never saw Danny again.

In December of 2013, I tried to contact Danny but found out he had died in January 2012 at his home in New Jersey. Danny was a good Marine and veteran. He volunteered with the VFW and Vietnam vets. I still have a picture somewhere of us sitting on Santa's lap, way back in 1966 at the USO Camp Lejeune when we were young, innocent and boots!

Semper Fi Danny and Tommy, both finally at peace.