He was a tall caramel complexioned man. His smile lit up when he walked into the room. He had a sense of humor that would cheer a person up no matter their mood. His hugs melted away the bad and made your days better. He was born Andre Booker. I knew him as Dre; his military family knew him as Booker. He was a son, a brother, a father, a Marine, a Soldier, a friend, and my husband. What a great combination to find and have in a man. All of these things wrapped up into one human being has to mean he's inhuman- supernatural. No, it just means he was a blessing for all who met him. 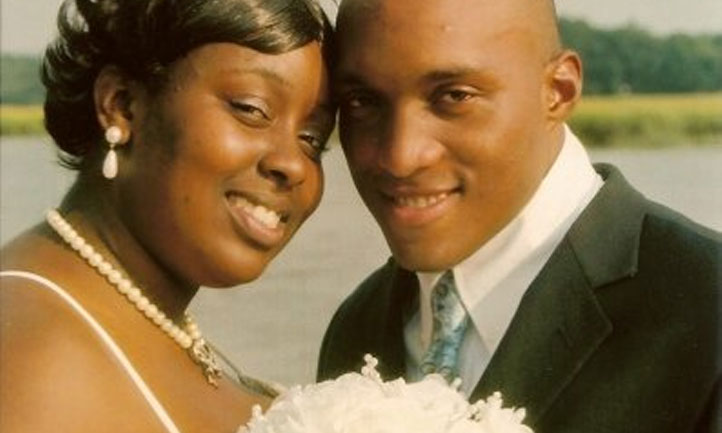 We met in April of 2004. By October of 2005, we were married. The day we wed was the happiest day of our lives. I remember joking with him saying, "First is the worst; second is the best." It was the second marriage for both of us. We both knew that we were destined for each other and that we were meant to be together forever. There were even jokes made between us about growing old together and sitting on our front porch in our little rocking chairs. I imagined myself crocheting something and Dre fussing at the neighborhood children running through our yard. We couldn't wait to see how old and wrinkly we would be many years down the road. We were in this for the long haul. We were committed and dedicated to the life we envisioned with each other and the very, very long-term end results.

Then August 2011 rolls around and I wake up one morning and that vision we shared involving our futures together came to an end. It felt like it was over long before it even had a good chance to begin. Now there is going to be no fussing from rocking chairs on the front porch, no counting one another's wrinkles, and no years down the road. Seven wonderful years spent together and almost six loving years spent married together stopped in the blink of an eye. From that moment on, I would no longer be the wife of Andre Booker or SSG Andre Booker, but instead as the widow of Andre Booker or SSG Andre Booker's widow. What a complete blow to my system. The moment he died, I know a part of me truly died with him. I didn't know if I could ever live again the way I did before, and to be honest at that point it wasn't even in me to carry on without him. I know for a while I was going through the motions.

In August 2011, I became a widow, but I am still married to my best friend, lover and husband Andre Booker. We still have date nights, chit chat and joke with one another. How is this possible you ask? It is possible because I refuse to let his memory and legacy die. I love my husband with all my heart and as long as my heart is still beating, then so shall his. I love the fact that our wedding vows say, "Till death do you part."  It's so true; the love we share is still there. Our marriage is still there until death does it part.  Death has not and will not do this marriage part. Birthdays, holidays and all special occasions are still celebrated together. We still enjoy each other's company and all those things we talked about can still take place. No, I haven't lost my mind. I just came to realize that because a person dies doesn't mean that they can't continue to live on in our lives. I will continue to keep him alive through memories and celebrations honoring him and his legacy.  Hi, I'm Shanette Booker, wife of SSG Andre Booker.