The week of August 9th started out great with the marriage of my youngest son David to Janica in the Adirondack Mountains of New York. The day was perfect with blue skies, no rain and low temperatures. The wedding took place on Oak Mountain. A lift carried us to the top where sixty people welcomed the bride and groom. My Bagosy family attended and consisted of my wife Iris, myself, my daughters Stacy and Kristin and their husbands, my son Michael, my nephews Chris and Alex, as well as numerous aunts and uncles. 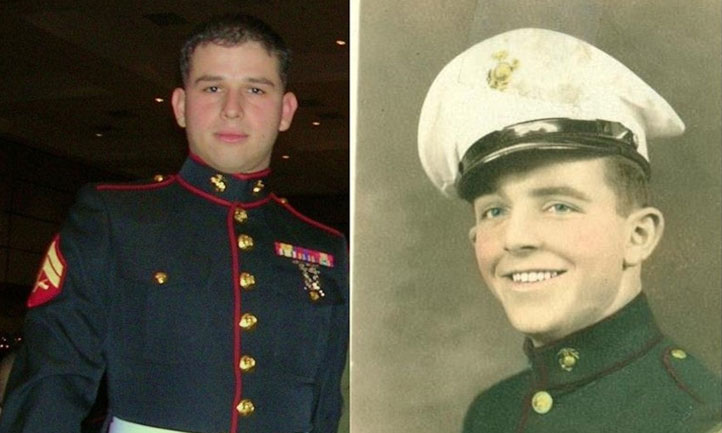 The wedding reception was one of the best I have ever attended but my heart ached for the one son who was missing, SGT Tommy Bagosy, USMC. As David and Michael, who was the best man, were in the process of having the wedding photos taken, I felt a sharp pain in my heart - missing from this picture was Tommy. I decided before the wedding that I would not mention Tommy since the day belonged to David and Janica. After all it has been four years since Tommy took his own life and perhaps it was best not to mention. My son Michael, as the best man, gave the toast for the bride and groom. During the toast, he mentioned Tommy in words that he spoke before his death "to appreciate the good times sometimes you need to have gone through the bad times". I was moved that Tommy was quoted, and a tear ran down my face. As the reception continued I noticed a table alone in the corner with a place setting for one with a nametag. As I approached the table, I saw on the nametag the name Tom Bagosy spelled out. At the sight of that I had to leave the reception for a moment because several more tears began running down my face. My sons had not forgotten their brother Tommy. As the reception continued I gathered my Bagosy family around the table set for Tommy, and we toasted Tommy.

On August 12th my Bagosy family traveled to Arlington National Cemetery to attend the burial of my father, PFC Joseph A. Bagosy, USMC 1942-1945, and my stepmother. The day was full of heavy rain - fitting for a burial of a Marine. The Gunny Sergeant in charge of the burial detail said that it was a day that only Marines could love. By the time we reached the Caldarium the rain became a monsoon and despite our umbrellas we all became soaked, yet the Marine detail conducting honors stood in the heavy rain in their dress blues. The bugler played TAPS while the detail fired the 21-gun salute.  The flag was presented by the Gunny to my older brother on bended knee and shook all our hands. Then we walked to the wall where the two urns were placed in the crypt. A prayer was said by the Navy Chaplin and the burial was completed. As the family left I stood alone and sang the Marine Corps Hymn; it was a final tribute to an old breed Marine.

After I returned home I received in the mail a copy of my father's Marine Corps records from his service during WW2. I read that my father enlisted on December 26, 1941 and went to Parris Island on January 2, 1942.  He served with the 1st Marine Division on Guadalcanal from August 7th to December 9th. He had over eight bouts of malaria; he was evacuated to Australia and returned to the US in May of 1943. His final discharge was Honorable with a disability on June 5, 1945. He was disabled with Psychoneurosis, which today is called PTSD. In his lifetime he never told the family of his PTSD but for the rest of his life he received a disability check from the VA.

So my week started with my son getting married and ended with my father being buried with honor.

Semper Fi to my two Marines!