In the summer of 2012, I received an email from my chain of command requesting volunteers for the TAPS Fort Hood Good Grief Camp Out. The event sparked my interest, and I quickly wanted to learn more about TAPS. Once I read about their mission and how they provide support to the families of our fallen military, I instantly knew I wanted to be a volunteer with the organization. 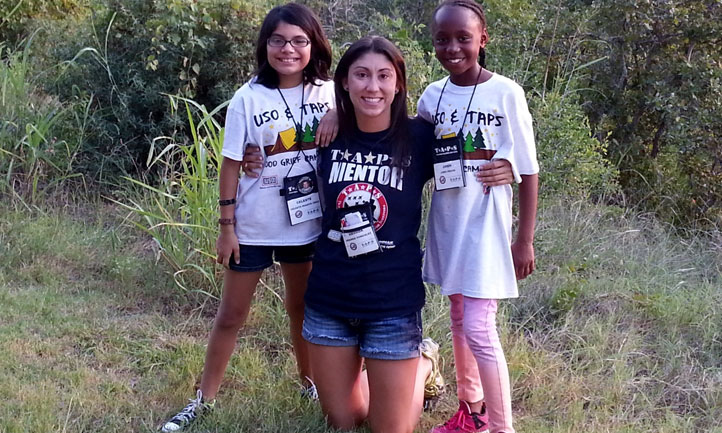 On the morning of the first day of the camp out, the volunteers (Good Grief Camp Mentors) had a training before the children arrived at the site. I went to the training not really knowing what to expect. However, in only a matter of hours, I was holding hands, crying and exchanging hugs with other mentors. I wondered . . .  was this camp for the kids or the active duty service members?

After the training, my fellow freshly minted mentors and I had the honor to be teamed up with our mentees. I was paired up with a very energetic 8 year old named Jireh. She and I needed the first day of the camp out to adjust to each other. It's hard to tell a complete stranger exactly how you really feel.

By day two of the camp out, we were best friends! It turned out we were very much alike.  We both told wildly outlandish tales and finished the other one's stories with our own crazy ideas. Jireh introduced me to Celeste who was also at the camp out. The two girls were best friends; both their personalities were completely different, but it worked great for their friendship. Celeste was quiet and shy; however, she always had an amazing smile on her face, especially when she was laughing at the funny things Jireh and I said.

I will never forget my last day of the camp out in 2012. I sat with Jireh in her mother's car to tell her goodbye; we were both very sad to leave. It was very heartbreaking to tell her goodbye, but we stayed in touch. Even if it was just a birthday card or a random phone call, it was as if we never were apart.

When it came time for the camp out in 2013, the mentors were outnumbered and it proved to be quite challenging for some. Each mentor had to select two mentees to mentor. Since Jireh had already requested me, I looked through the packets for my second mentee and spotted Celeste's packet. I swiftly and proudly snatched it into my possession. I knew that this camp out would most certainly be a success if the three of us could stick together again.

I love being a part of these girls' lives, but most importantly, I love how much they have influenced my life. These girls show the strength and the courage any person in the military would be proud to display. At the ages of eight and nine, I saw them radiate that sisterly bond that comes from soldiers and families. When Jonathon and I saw them both at Snowball Express, I couldn't contain my excitement.  I loved that my mentees were meeting my future husband, and they had to approve of course. We all danced (very poorly I might add), giggled and truly enjoyed being a small family that had our own bond.

As it became time to select our wedding party, Jonathon and I knew that we wanted them to play a role. They were the cutest flower girls I've even seen, and we were honored that they were a part of our special day. Besides, they are a part of our TAPS family. This story isn't really about our wedding; this is their story- two girls brought together by tragedy, bonded by friendship. I am the lucky one that gets to be a part of their lives.