That day in March 2009, I saw Ricky's name light up on my phone and I answered like I always did, "What's up jarhead?"  When I heard a police officer's voice tell me there'd been an incident and the injuries appeared to be self-inflicted, I didn't believe him.  At the time, I just couldn't believe it.  I knew my son and this wasn't him.  My wife and I dropped everything to rush to California to be by his side. He passed away two days later. 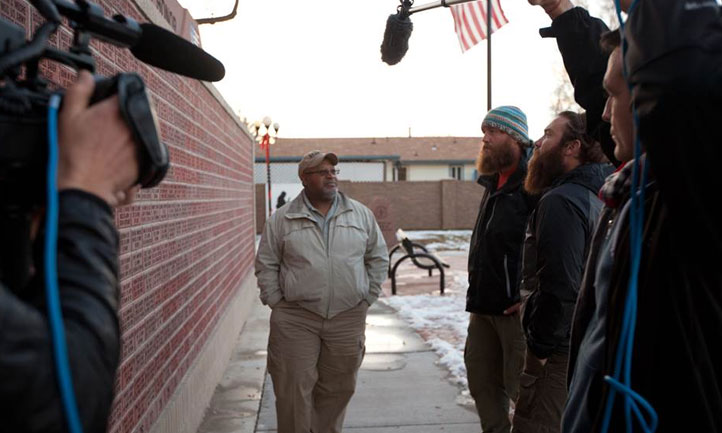 Ricky loved being a Marine.  He was a happy, energetic adrenaline junkie.  His suicide made no sense to me.

In the midst of my grief, I was overwhelmed by this conviction that I wanted to help any person - any parent - who was experiencing the pain and anguish that I was feeling.  I had to do whatever I could to support the newly bereaved to get through this. That's why I work for TAPS.

The importance of having someone who can understand what you've been through was so clear to me when TAPS helped me through my mourning.  That's what I do for people who are joining the TAPS family through my position at the Fort Carson office.  I connect them with other people who have been through the same and can give them the understanding they need as they come to terms with their loss.  If you're a father who has just buried your only child, another father who has experienced that same grief is the best person to offer guidance during that difficult time.

This is how I serve our community.  I talk to people and encourage others to talk too.   I believe that communication and education about mental health, PTSD, and even suicide, is the best way to reduce stigma, to show understanding.  Only through getting people to realize that these challenges are not caused by weakness can we have the open dialogue necessary to support those who need it.

At the TAPS conference in November last year, I met two filmmakers - Michael and Claire - who told me they were making a documentary about two veterans who were walking across the country to bring attention to the issues faced by returning military and their families.   When these two ex-soldiers - Tom and Anthony of Veterans Trek - made it to Colorado Springs over Thanksgiving, I spent some time with them and we shared our stories.

It was amazing to meet with them, absolutely amazing.  Seeing these two young men so willing to talk openly and honestly about their struggles was inspiring. They're not hiding, they're walking.  They're telling their story and in doing that, encouraging others to do the same.

And that's what is so important about this documentary being made about them - Almost Sunrise.  By bringing their story and their honesty to a wide audience - both military and civilian - this film will make people open their eyes and realize that in stepping forward and protecting our country, some of these men and women will get injured and these wounds are inside as well as out.  They deserve our gratitude and they deserve our support. And we can best support them if they feel they can talk openly about their struggles with people who care and want to help them find solutions.

This film will help us all realize how lucky we are that these brave men and women take such risks and incur such wounds to keep this country safe.  We can all do a better job of being grateful and caring for them when they come home.

(As told to Claire Ratinon)