As we get closer to moving out of state, I am starting to go through everything to determine what needs to come with us and what can be left behind.  I normally enjoy this process as I have fun organizing things and even more so, I love the feeling at the end when everything is done.  However, this current task is proving to be a much different experience than ever before.  This move is bringing some emotions that I wasn't necessarily prepared for. 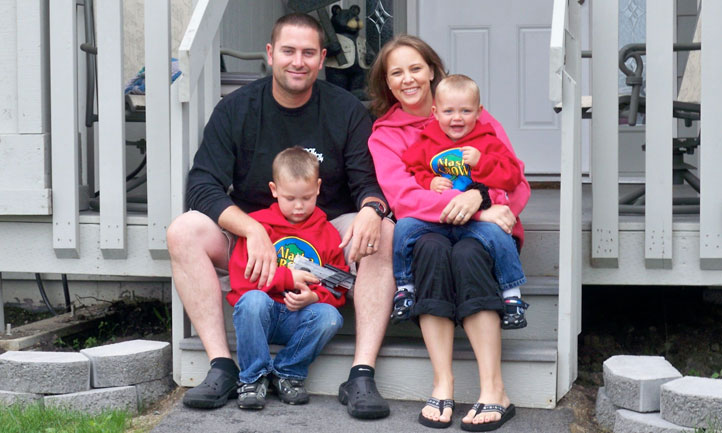 After my husband died I wasn't ready to part with his belongings, so I organized everything into Rubbermaid containers and neatly put it all in the crawl space for safe-keeping.  I saw these bins every time I went down there (they were all labeled with their contents) but I still wasn't ready to pull them out and go through them.  As I am now starting to pack the house, one of the first steps was to get all of our storage stuff out of the crawl space.  A few friends from Jeff's squadron offered to help with this tremendous task so I didn't have to do all of that heavy lifting by myself, which was very much appreciated.  It took about an hour to clear it all out, and I was then left with a living room full of bins stacked 3-4 feet high.  As I began to look through them, I quickly realized how many of them included Jeff's belongings - clothes, shoes, jackets, uniforms, flying gear, hunting clothes, etc.  It wasn't until later though that the impact of what I was doing would come to the forefront of my mind and its magnitude realized.

I took some time right away and peeked through a few of the bins, but I didn't get too far into it before I had to leave for class.  While at class I found I was just having an off night, not really feeling like myself.  I felt like I was about to cry but didn't know why.  It came up in conversation with a friend that my house was now a disaster with all of my storage contents in the living room. Then she quickly asked, "Is any of it Jeff's stuff?"  It was like a light bulb went off, and it became clear that this is what was subconsciously bothering me. I tried my hardest to hold back the tears.

As I said before, after Jeff died I just couldn't do much with his stuff, so I packed it all up and put it in storage…maybe even packing some of my feelings away with it.  Now, almost 4 years later, I am forced to go through it all.  I feel like I am finally ready to let some of it go and only keep what truly matters most, but it still isn't easy.  I really don't need to keep every pair of shoes he owned; I know someone else could use them more, but it has taken me a long time to get to this point.  Seeing his belongings again just makes me miss him so much, and it is a stinging reminder that he isn't making this move with us.  I think opening those bins also opened some emotions that I hadn't had to deal with in a long time.

Grief is a funny thing and it finds ways to present itself sometimes when you least expect it.  I've had quite a few moments like this in which it wasn't until someone else pointed out how a situation might be difficult for me that I could see things from a different perspective.  Sometimes even with what seems to be menial tasks that I don't really think anything about.  But then out of nowhere, strange feelings seem to arise and I can't understand why.  This was what made me recognize why I was feeling the way I was on that day.  I have also found that in these times, once I recognize why it's hard, I can look at the situation in a new light and maybe even approach it with a new strategy.   It doesn't make the situation any easier, but understanding my feelings can help me handle it more effectively and in turn, find ways to embrace my grief and work my way through it.

This move is going to be hard and I don't think I realized how much so until now.  Closing on this house absolutely hurt my heart, and I couldn't stop the tears for about an hour before the signing.  This is our home that we built together.  Another house isn't going to have that special feeling that this one does.  My friends here know me and understand what I have been through.   They have been there for me during the highest of highs and lowest of lows.  I'm not going to have that bond with new friends.  However with all of that said, I still know that this is the right decision for me and my boys, and we are really excited about the opportunities that lie ahead.  In the meantime, I am going to do my best to enjoy every minute I have here in Alaska and find ways to embrace my grief so that I can work through it in a new way.   Embrace it, learn from it and continue moving forward.