Running the Dopey Challenge at Disney World was about more than a race for me.  I have now completed 79 marathons, but this marathon (plus a half marathon, 10 K, and 5 K) represented more than a taxing physical challenge.  The miles jump started 2014-my year of hope.  What better place to start it than the place where the beginning of the end started; many happy memories came flooding back, and I was able to take that first terrifying plunge off the end of the high diving board to start to fly on into an adventure all my own. 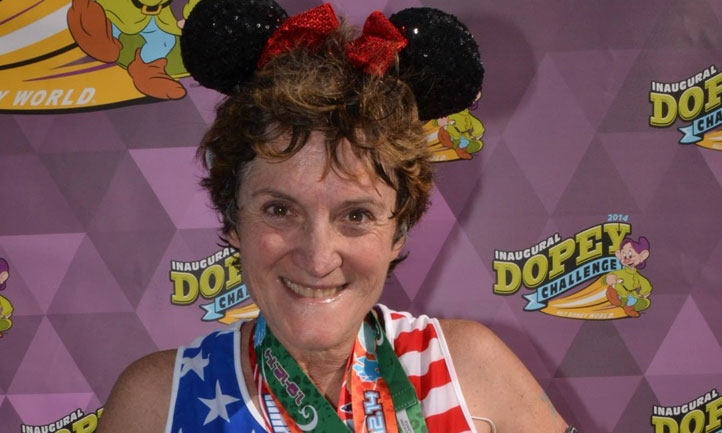 Most of you know the last Christmas present Phil gave me before he deployed was the Goofy Challenge in 2011.  My daughter ran the half marathon remotely from Bagram Air Base while she was deployed, but before this past weekend, thinking of that race literally crushed my heart.  You see, Phil was set to deploy December 24, 2010, but a snowstorm in Europe postponed his deployment for a few days.  I missed his last weekend at home because he wanted me to go anyway.  It gave me a little more than three hours with him before he left for the last time.

This weekend reminded me of how happy he had been to give me that race because he thought it would help get me through those first days of his deployment. He also knew how much I wanted that Goofy medal!  I was reminded of selfless love because he put my dreams and happiness first because he wanted me happy.  If I live in darkness, it would crush him, thus 2014 became my year to seize back my life-to hope again.  Yes, it is easier said than done which is why the Dopey Challenge became my spark to ignite the blaze to carry me as I leap into unchartered waters of thinking about who I am without my Phil, what I want, where I want to live, dating at some point, and finishing two more degrees.

While at the Dopey Challenge weekend, I was touched by courage on many levels.  Looking at what other people have overcome or are overcoming is humbling at best.  Who am I to question the events of my life?  At some point all of us have something that doesn't seem fair. Even more so, we get something that seems just too big for us to bear.  Like running miles and miles, sometimes it is just about the next step.  I found that looking ahead too far is daunting.  I want to quit before I even start.  Like a marathon, though, if I can look at the next step or the next minute, I can make it through to the end.

What is interesting about traumatic death is it is so shocking and so painful that a person literally is physically impacted.  Many people suffer severe health crisis themselves when they hear the news. I literally physically hurt, and I still remember the chest pains.    In those darkest most hopeless hours, I could not look ahead.  All I could do was sit and let the storm batter me second by second.  At Disney, I realized the storm is essentially over.  I am rebuilding.  My life doesn't look like what I thought it would look like, but what is interesting is that the life I am rebuilding is a better version of my old self.

I was inspired. My hope was ignited by people who have physically overcome so much.  My friend Kimberly finished the Dopey Challenge one weekend after finishing chemotherapy.  She did it Kimberly style-bright red lipstick and a smile from ear to ear.  In her sparkling outfits and with her infectious enthusiasm, she reminded me that it is okay to be happy because life is worth celebrating.  It is that simple.

The promise of hope is that I can look beyond what once was to the promise of what might be. Those sparks ignited with the magic of Disney and are blazing.  I chose Disney because it is a happy place and my inner girl child comes out-you know, the one that says that yesterday might have been a bad day, but today good things are happening.  I just know it!  Well, I embrace my pink polka dots, bubbles, and sparkles because I just know it!  Tomorrow is worth living for and a certain angel would want that for me.  Hope ignited and sparkles galore...I carry on to the end one step at a time, one mile at a time, one day at a time.  See you next year #teamdisney!