What an amazing and inspiring past few weeks for TAPS! On March 19th, we welcomed 20 military widows and widowed fiancées from all across the country for a new type of amazing retreat in Charleston, South Carolina. Retreat attendees were introduced to a holistic approach which helped them bring transformation within their lives through a combination of athletics, art therapy, journaling, and accountability partnerships. With each activity, participants gained empowerment. The women grew to know one another…ultimately realizing they were not alone in their grief.

On March 21st, TAPS held its first regional survivor seminar and Good Grief Camp of 2014 in Philadelphia. More than 100 families joined us for a wonderful weekend of hope, comfort and healing. Seminar attendees participated in grief related workshops and excursions around Philadelphia. For many participants, this was the first time they found peer support in coping with their losses. They met others they could relate to and share their journeys with. TAPS would like to thank all who attended, including our families, military mentors, volunteers, and staff. TAPS extends our appreciation to the Travis Manion Foundation for sponsoring this seminar. We could not have done it without your generous sponsorship!

On the morning of March 27th, TAPS staff joined IAVA (Iraq and Afghanistan Veterans of America) and other veteran service organizations for the National Day of Action to Combat Suicide.  Volunteers placed 1,892 American flags on the Washington Mall representing the number of veterans estimated to have died by suicide to date in 2014. The event featured as speakers IAVA CEO and Founder Paul Rieckhoff and Kim Ruocco, director of suicide postvention programs at TAPS. 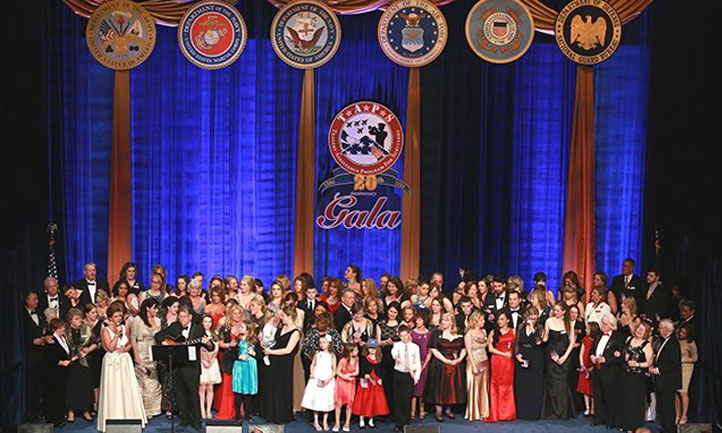 The 2014 TAPS Honor Guard Gala  was held Thursday, March 27th. It was a remarkable evening for TAPS as we celebrated our 20th Anniversary. More than 850 TAPS supporters and donors joined us for this special event to recognize and honor our military, U.S. government contractors and civilians lost in service to America and the families they left behind. Army General Martin Dempsey, Chairman of the Joints Chief of Staff, was the keynote speaker. He said the TAPS mission is "absolutely essential to who we are as a profession. Establishing, maintaining and living up to that bond of trust absolutely has to exist among our ranks in peace and in war." TAPS is excited to announce we exceeded our goal of raising more than two million dollars which will help us continue our mission to provide compassionate care and support to the families of America's fallen heroes.

TAPS has many upcoming events and we hope you can join us! Registration is now open for the TAPS Fort Carson Survivor Seminar and Good Grief Camp  which will be held April 26th-27th in Colorado. The 20th National Military Survivor Seminar and Good Grief Camp for Young Survivors will be held May 23rd -26th in Arlington, Virginia. The final day to register and apply for scholarships is April 29th.