My name is Kim Ruocco and I am the widow of United States Marine Major John Ruocco, who died by suicide at age 40 in 2005.

John was an incredible husband, son, father to our two boys, and Marine. He was dedicated and passionate in everything he did. 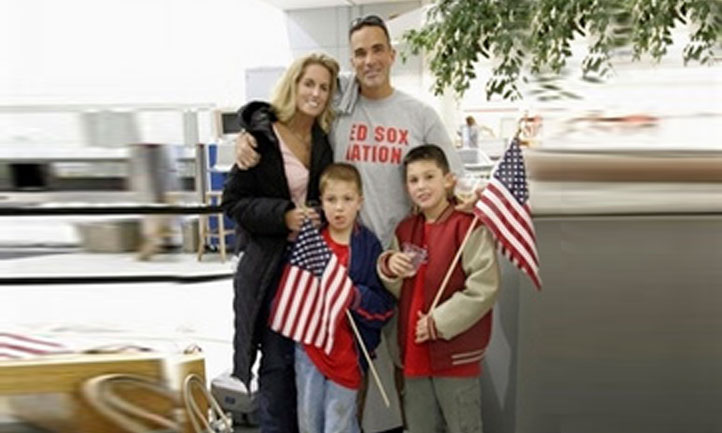 John joined the Marines in 1989 and became a pilot even though he wanted to be in the infantry. After scoring high on an entrance exam he was convinced to accept a pilot slot. He flew the Cobra helicopter and the T-37 jet for the military. He was a respected leader to his troops, who provided comic relief when everyone needed a laugh, as well as a steady hand and leadership in times of combat and operational stress.

My husband was the kind of person who made friends wherever he went. He enthusiastically met the locals in each new town every time he changed duty stations.  He loved his friends and family and was the life of any party. He even found time to coach baseball and roller hockey. Each team was named either the "Red Sox" or "Bruins" after his beloved Boston teams.

My husband gave 100% to his friends, his family, his fellow service members, and his community, 100% of the time. He only had one fear. It was not combat or flying with night vision goggles or even death. John was afraid of letting someone else down. He spent his life sacrificing and serving for the good of others.

John felt responsible for his junior Marines and their families.  Over time John accumulated scars of trauma and loss. He made life and death decisions that were hard for him. He saw friends die in military training accidents and in combat. I can remember attending memorial services for a group of Marines lost in a training accident at Camp LeJeune with John. He was back in his helicopter and flying the day after the funerals. These losses impacted him deeply and he carried these tragic scars as personal failures on his psyche.

As the senior Marine on base, John taught suicide prevention and provided resources to others. But John had a secret; he suffered from untreated depression and post-traumatic stress. Over the years he was able to push himself through it with exercise, nutrition, prayer and family support.

Looking back now, I can see how John was walking around with a full cup of water waiting for that last drop to make it overflow. He flew 75 combat missions in Iraq and returned a different man. He was withdrawn, agitated and sullen. He had nightmares and could not sleep, and he struggled to reconnect with me and our two sons, Joey and Billy, who were 8 and 10-years-old.

John started having trouble concentrating and flying the aircraft that he knew so well. He failed a routine flight test soon after his return from combat. We talked about getting help but he feared that people would lose respect for him or think he was faking. But by not getting help, his worst fears were coming true. He was letting people down.

The happy and fun John whose laugh could fill a room was gone. He couldn't find joy in anything, even the things he used to love. John was stationed across the country from our home in Massachusetts, preparing for a second combat deployment to Iraq. The boys and I called him to talk about the exciting news that one of his favorite teams, the New England Patriots, had won the super bowl, and he didn't even watch the game. As a trained social worker, I realized John was in crisis and asked him to get help. I also asked him if he was feeling so badly that he was thinking of killing himself, he replied that he would "never do that to you and the boys". Despite this response, I knew that asking for help was going to be the most difficult thing he had ever done in his life. I got on the first plane I could and set out across the country to support him.

But I didn't get there in time. In in his altered state of mind, with poor judgment and tunnel vision, John thought everyone would be better off without him and he lost hope. He died by suicide. Alone.

When my husband died, I thought I lost everything. We had been together for twenty-three years. I was overwhelmed with the path before me and was reeling in emotional pain. I had lost my life partner and my best friend. How do you tell two little boys that their dad, their hero, made it safely back from combat in a war zone, and then he took his own life?

I questioned everything I said and did in the days before John's death, and worried that I could have done something else to save him. I didn't trust my instincts because I felt like he had "died on my watch". The support systems that I usually depended on did not seem to understand the depth of my pain or the many questions that I was grappling with.

I started my grief journey by reaching out to others who had lost a loved one to suicide. I came to the Tragedy Assistance Program for Survivors (TAPS) in 2006 looking for help and hope for me and my hurting sons.

I hoped that the TAPS Good Grief Camp program could help my boys, and they made life-changing connections with service members who were volunteering at the camp to help children of fallen service members, including Matt Sterni, a Marine pilot who had flown with their dad in Iraq. Matt told them how John supported and guided him through a difficult combat situation. He helped my boys remember again their dad - their real dad - before he got mentally sick and withdrew from them.  He shared funny stories that he experienced with their Dad while in Iraq, stories that I had never heard.

I found help at TAPS for me too. The power of meeting others who had experienced a similar death, was so incredible. As I began to heal I realized that there were others that were suffering alone. With the help and support of my friend Bonnie Carroll, I used my professional training to formalize a program to provide comprehensive care to all those grieving a military suicide.

While most military deaths are traumatic and violent in nature, suicide poses special issues that the parents, spouses, children, siblings and other family members must grapple with. It's extremely important that we get these families into bereavement care and support following a death. Family members grieving a death by suicide are 2-5 times more likely to die by suicide themselves and at risk for other issues, such as depression, insomnia and anxiety. They often recluse themselves for fear that they will be judged or will be asked questions that they themselves are not able to answer.

Today we have more than 4,000 people grieving a death by suicide who are part of the TAPS community. We are holding our sixth annual national seminar for military suicide survivors in Florida in October, bringing together the best experts in suicide support and bereavement care to help hurting military families find healing and hope amid the devastation that suicide brings. We are expecting more than 500 people this year, including 150 children.

Over time, I was also able to reflect on John's life and what led to his death. I began to assemble a timeline and narrative, so I could share John's story and educate others about mental health and save lives. Last year I testified for Congress on ways to improve mental health care for our veterans, sharing information gleaned from families coming to TAPS for help and support.

By engaging in suicide postvention to assist grieving military families, I was able to find new meaning and purpose in my life.  This helped me realize that I could and would survive the trauma of John's death, and that my children and I were going to be ok.

Kim Ruocco is a social worker and the director of suicide postvention programs at TAPS.