Okay, it's finished! The quest to honor my son, SGT Thomas R Bagosy USMC is complete. On October 16, 2014 the Commandant of the Marine Corps General Amos approved the awards committee recommendation for Tommy to be awarded a Purple Heart for injuries he received in Iraq on December 18, 2006. According to one of Tommy's battle buddies, my son and four other Marines were in a Humvee providing security for an EOD team in Fallujah when they ran over an IED. It exploded next to the right rear door where Tommy was seated. 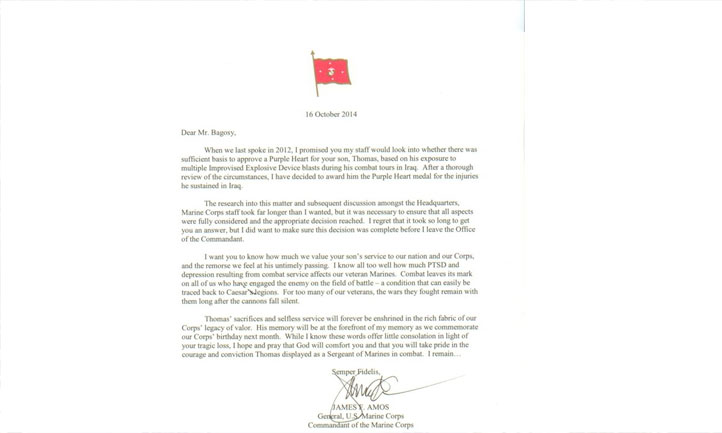 The Marines were treated by the corpsmen at Fallujah's main medical center and released back to duty. The Gunner was treated for a TBI and received the Purple Heart. All of the Marines in the Humvee survived the IED and served their time in Iraq and arrived back in the United States in April 2007.

In April 2007 Tommy reported to the Camp Lejeune Deployment Heath Center and complained of headaches, sleeplessness, irritability, and depression. Tommy's wife told the doctors that the man who went to Iraq was not the same man who came home. Tommy was miserable and depressed. He began drinking a lot. He spoke with doctors who gave him medication; he also spoke with a psychologist for 15 minutes. Follow up appointments were scheduled and a MRI to see if he had a TBI.

The follow up appointments resulted in more medications and time spent with the psychologist. The MRI was positive for a TBI and PTSD. Tommy was placed on light duty and restricted from further deployments. Tommy continued to see his psychologist and take his medications which continually changed through 2007 into February 2008 with very little improvement.

Tommy was due to complete his Marine Corps four year enlistment in March 2008. In February 2008, Tommy called me and told me he had reenlisted for four more years. I was amazed that he was allowed to reenlist due to his condition of a TBI and PTSD. Tommy told me that it was as good as it was going to get, and he felt they did all they could. In March 2008, Tommy reenlisted with MARSOC and left for Afghanistan in June 2009 and returned November 2009. In January 2010 he went back to the deployment health center with the complaints of headaches, sleeplessness, etc. Tommy went downhill from there. In February 2010, he threatened suicide. In March 2010, he threatened to shoot up his shop and threatened his wife. In April 2010, Tommy's wife was asked by his command if he was faking his TBI and PTSD. She denied he was faking. Tommy's gunnery sergeant called him a coward. Tommy continued to see the psychologist plus a psychiatrist. He spoke of suicide but the doctors said he did not have a plan so he was given more medication. Tommy was found by a medical board to be suffering from a condition that he did not have prior to entering the Marine Corps; the board recommended that he be retired from the Marine Corps.

On May 10, 2010 Tommy was to enter the Naval Hospital Camp Lejeune for further treatment but refused to go and instead completed suicide.

My wife and I were not aware of what Tommy was going through; he told his wife not to tell us.

I first became aware of Tommy's TBI and PTSD during his funeral on May 16, 2010 when I asked his battle buddy what happened in Iraq. I was told that Tommy was involved in at least six IED blasts while on patrol in Iraq. I started my quest to find out why he had not been awarded a Purple Heart.  It took seven years to find out all the details of what happened. I spoke with President Obama, the Commandant of the Marine Corps, the Assistant Commandant of the Marine Corps who is now the Commandant, Tommy's platoon lieutenant, and his executive officer (XO). I reviewed his medical file at the Camp Lejeune Deployment Heath Center. It took me three years, but I found Tommy's battle buddies who witnessed the IED and gave statements as to what occurred on December 18, 2006. Tommy was tossed around in the Humvee and struck his head so hard that it damaged his kevlar helmet. He had to be escorted by his battle buddies to chow and to his shop. He was not allowed on patrol for at least four days. All of this should have been in his medical records but his Iraq records were lost. Finally all the reports and witness statements were sent to the awards committee for the final review. A week later I received a call from the investigator that the award had been approved and a letter was forthcoming from the Commandant.

I believe in Semper Fi.  It won't bring my son back but it does bring a closure to the Why question of Tommy's suicide. The award of Tommy's Purple Heart will be given to his wife Katie, his eight year old son Nathan, and his six year old daughter Avery. It will show Tommy's bravery for the silent wounds he suffered during combat, and perhaps his story will help other silent wounded Marines not to give up, not to ever give up.