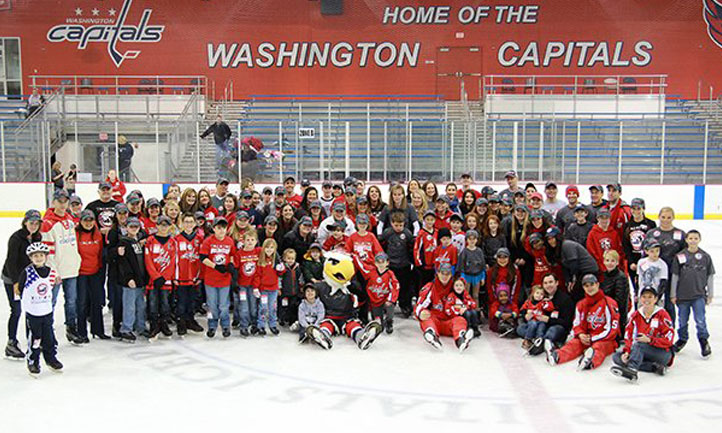 The event kicked off the 2013-14 Courage Caps campaign sponsored by Telos Corporation. Courage Caps are team-issued branded hats and T-shirts that went on sale Feb. 4, when the Capitals hosted the New York Islanders.

For the third consecutive season, TAPS is the beneficiary of Courage Caps. TAPS is a nonprofit organization that provides comfort and care for anyone who is grieving the death of someone who died while serving in the military. TAPS will receive 100% of the proceeds raised through the sale of Courage Caps.

“It’s such a great cause,” said Hillen. “When I get to come out here and meet kids and sign autographs for them, to see the smile on their faces, it doesn’t get any better than that.”

“Losing someone, I can’t imagine what they have gone through,” said Hillen. “All of the charities that support military are great. Those families gave so much for our country and for our freedom. It doesn’t go unnoticed, and I am really thankful for all that they do for us.”

See video recap from the kick-off skating party with TAPS families of the event at MonumentalNetwork.com. TAPS would like to thank Reynoldo Leal for taking a number of photos at the event.

Courage Caps and T-shirts will be sold for $20 online at WashingtonCaps.com, at the Washington Capitals Team Store at Kettler Capitals Iceplex and at the Team Store and at stands throughout Verizon Center during Capitals home games. There will also be a limited number of autographed Courage Caps and T-shirts available for sale at WashingtonCaps.com and at the MSE Foundation table located behind section 104 on the main concourse at Verizon Center.

A select number of autographed hats and T-shirts will be on sale at the MSE Foundation table at section 104 on the main concourse at Verizon Center. When the Capitals host the New York Islanders on Feb. 4, fans may purchase hats and T-shirts signed by Nicklas Backstrom, John Carlson, Mike Green, Braden Holtby, Alex Ovechkin and Tom Wilson for $50 each and hats signed by Karl Alzner, Troy Brouwer, Jason Chimera, Mikhail Grabovski, Philipp Grubauer, Marcus Johansson, Brooks Laich and Joel Ward for $40 each.

Since the program launched during the 2007-08 season, the Courage Caps campaign has set a new record each year, donating a total of nearly $350,000 to charity through the sale of 12,000 Courage Caps in six years and more than 5,000 T-shirts in four years.

TAPS is the national organization providing compassionate care for the families of America's fallen military heroes. TAPS provides peer-based emotional support, grief and trauma resources, seminars for adults, good grief camps for children, case work assistance and a 24/7 resource helpline for all who have been affected by a death in the Armed Forces, regardless of the location of the death or the circumstances of the death. Services are provided free of charge. For more information about TAPS, visit www.taps.org or call the toll-free help line at 1.800.959.TAPS (8277).