Here I am about to hit my 2 year mark, and for the first time it hit me….what about the children! I can't believe how easily we can forget about them when it comes to the grieving process. During my first year, I explained to my boys that Dada had died and then I tried to prepare them for what would happen at Dada's (military) funeral.  After that I think the whole child thing became out of sight, out of mind. The school offered counseling for them through Hospice once a week. I signed off on it, but I avoided everything else "Dada death" related with the children. All of my SOS events, TAPS events, even special holidays (except Christmas and Father's Day) I handled alone on my own without including the children. 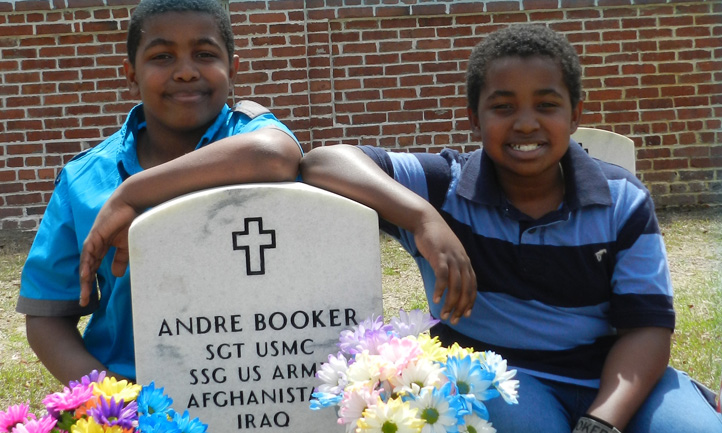 I went a whole year like that…not intentionally, but it happened. I avoided their loss. I couldn't believe it. I didn't even realize it happened that way until this past Memorial Day. I took them to the Beaufort South Carolina National Cemetery to place flags on the graves of heroes buried there. I thought it would be something memorable for them to do to honor Dre and all others like their father. I was surprised at how much they enjoyed themselves and appreciated being able to participate in something such as that. We talked about what Memorial Day was and its significance to America and the fallen heroes. This year, I even took them to the Fort Stewart SOS Memorial Day Candlelight Vigil event, where they asked if they could participate in the actual candlelight ceremonial part. It felt great having our boys with me honoring Dre and his legacy.

I'd been so focused on staying strong for them that I blocked out their opportunities to be strong with me. To my surprise, though, that didn't really matter because they already had their own strength and were using it to keep me strong. I love our children. They have grown so much within this last year and a half. They definitely have the characteristics of their father and I am so proud of them, and I know he is too. I am glad that I didn't actually shun them completely out the first year and that I did allow them to participate in some holidays and celebrations. I think that helped with their healing as well as my own. It's a wonderful feeling to know that even when we think our children don't understand or aren't strong enough, they show us just how wrong we really are. We begin to see all the great traits that they picked up from us along the way.  All this time I was trying to gear myself up for the emotional smack of grief and the turmoil that I expected to be associated with Dre's passing for the children,  and boy am I ever happy and blessed that thus far that has not been the case.