TAPS is extremely grateful for the overwhelming support we've received in recognition of our efforts to reach out to grieving military families, providing them with compassionate, emotional support and connecting them with multiple resources and TAPS programs. We realize this is an effort we cannot do alone. 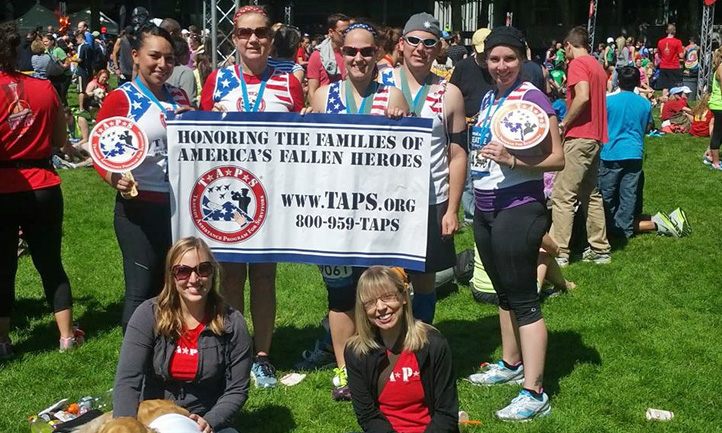 We are truly thankful for all of our supporters and donors. Now in its eight year,, the Colorado Celebrity Golf Classic benefits TAPS and raises key funds to help our programs. This year's tournament was held June 21-22. The event began with a "Salute to our Fallen Heroes" dinner show and auction, and was followed by our friendly, competitive golf tournament the next day.

We were honored to have the presence of TAPS families, Major General (Ret.) Mark Graham and his wife Carol, numerous donors and active duty military service members. Celebrities included baseball player Jason Hirsch, singer Daryl Worley, and singer/songwriter Brett Jones. About 600 people attended the dinner show and auction and 110 golfers played in the tournament. From this amazing event, over $300,000 was raised! The money will be used to help fund our TAPS Regional Seminar and Good Grief Camp at Fort Carson, as well as underwrite the cost of additional regional seminars near other military bases. Thank you so much to all our donors, supporters, and sponsors of this event, which included Aimco Apartment Homes, American Furniture Warehouse, Coors Cowboy Club, Greiner Electric, Miller Coors, Red Lion Hotel Denver Southeast, and WizBang! Solutions. Words cannot express how appreciative we are!

We would like to extend our thanks to all our volunteers who in the past month have contributed 22,633 hours to TAPS through mentoring our children and fellow peers, helping with the TAPS National Military Survivor Seminar and Good Grief Camp, assisting with the TAPS Run and Remember Team, as well as other events!

TAPS is proud to announce that we are now a part of The President's Volunteer Service Award program. This will allow us to track the hours of our volunteers and nominate them as they meet the requirements for this exceptional award. Keep up the good work! If you would like more information about volunteering with TAPS or how you can help check out TAPS volunteer central!

Also this week, TAPS members were able to learn new information that will help improve our programs for surviving military families at  professional conferences, while also sharing about our work. Our Good Grief Camp Team went to the 17th annual National Alliance for Grieving Children symposium. During the three day conference, the team presented about TAPS and children grieving a military loss, as well as spoke to other leading professionals in childhood bereavement. Jerome Tennille, our volunteer coordinator, attended the National Conference on Volunteering and Service convened by national authority on nonprofit volunteering, the Points of Light.

Last weekend, the TAPS Run and Remember Team ranthe the Seattle Rock'n'Roll Marathon and Half-Marathon to honor our fallen military heroes and raise support.  Even though Seattle is known for its wet weather, on the day of the race, not a raindrop fell! The sun was shining and our remarkable and inspiring runners truly "rocked" the race! Seeing surviving families and battle buddies of our fallen military participate in the TAPS Run and Remember Team accomplish their goals  and honor our  heroes is humbling and profound! We are so proud of you all!

Summer is here and TAPS has a busy schedule planned. This weekend we will be at Ft Bragg hosting with the help of the USO our Good Grief Camp Out for children of our fallen troops, and in early July we have several retreats planned for parents and siblings! You can see all of our upcoming events on our online calendar.