On September 23, 2013 I traveled to the UK with a group of TAPS parents, who just like me, had their son die in Iraq, Afghanistan, or at home. We went to the UK to meet and visit fellow parents who had their sons die in military service. 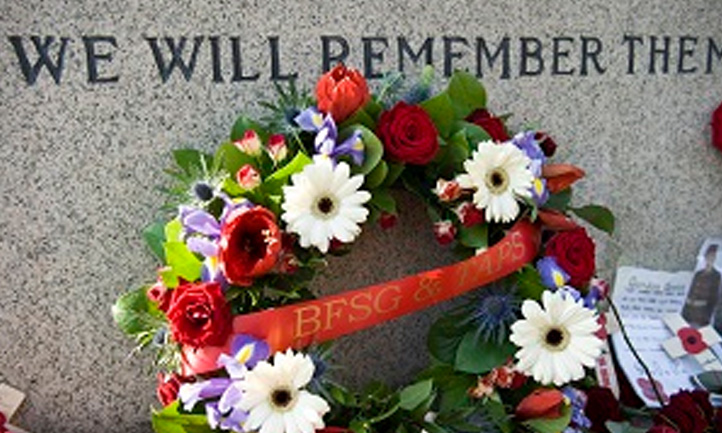 On September 24, 2013 I arrived in London and took a taxi to our hotel, the Victory Service Club - a British Military Club built in 1907 in the heart of London. I spent some time with TAPS people, Erin Jacobson, Kellie Hazlett, and Bonnie - who is one of the few people in the world who only needs to go by her first name. I then crashed and slept from 2 p.m. until 7 a.m. the next day. I was a bit groggy, a victim of jet lag.

On September 25, 2013 my life changed once more since May 10, 2010, the day my son died. I was introduced to Rodger Bacon, a retired detective from Scotland Yard, and his wife Maureen. They were very caring people. It turns out we had something in common…we were both members of that club that none of us want to be a part of. Rodger and his wife had faced the knock on the door telling them that their son died in British military service.

Rodger and Maureen were our guides for an outstanding walking tour within the middle of London. Our TAPS parents group toured the Royal Air Force Bomber Command Memorial, which is dedicated to those who protected London from the raids during World War II. We also visited the gates of Buckingham Palace and the Commonwealth Memorial  Gates, which are dedicated to British, Australian, and New Zealand troops who died during the wars. Roger was informative, and gave us an exciting taste of British military history. We rode the underground to the Tower of London and finished at St Paul's Cathedral where we toured, had tea in the crypt, and listened to the Vicars Choral Evensong.

It was during the Evensong, while listening to the boys choir, that I thought back to 1997, the last time I was in St Paul's. My wife, three sons, and I had the best vacation we ever experienced by touring Wales, Scotland, and England. The trip took us three weeks.  We traveled in a van, but what a great experience. I remember Tommy during that trip…he was 12 years old and was thrilled with his collection of toy knights, archers, and other English warriors.

As the choir sang, I also thought of Tommy and how he died May 10, 2010. Tommy started his last day on earth by kissing his kids and wife goodbye, telling them he loved them. Tommy had to make his appointment with the Naval Deployment Health Center at Camp Lejeune, NC at 0900 hrs. Tommy's wife called the physiologist who had been treating Tommy for 5 months after returning from his combat deployment to Afghanistan. She told her Tommy was suicidal, and he needed to go in the hospital.  She also told them not to let him go to his truck because he had a gun in it.

The physiologist and a medical doctor, who was also treating Tommy for his TBI and PTSD, made the decision to have Tommy hospitalized at the Naval Hospital. They told him in a meeting, and he refused. They told him he had no choice and started to make preparation with his MARSOC command to have him admitted. Tommy asked to get his cigarettes out of his truck. They asked for his keys, and they would get his cigarettes. He then changed his mind.

As the doctors went to make arrangements, Tommy walked out of the center and ran to his truck. He fought off other Marines who tried to stop him and drove off in his truck with the gun.

The police stopped Tommy in his truck around 1230 hrs. in front of the Camp Lejeune Fire Department. The police, all young Marines, had him surrounded with their guns drawn and aimed at my son. Witnesses gave written statements later as to what took place. As Marines screamed for Tommy to get out of his truck and drop his gun, he refused. A woman sitting in a car behind him kept watching Tommy's eyes. She told us the next day in an email that the last time she looked, she saw a change in his eyes and knew he had made up his mind. It should be noted that there was no attempt by a trained Crisis Intervention Team to try and talk Tommy into surrendering his weapon… just a bunch of scared, nervous, young Marines who were screaming at my son to put down the gun.  Would it have made any difference? I will never know.

At 1300hrs, Tommy stepped out of his truck on a beautiful spring day, Tommy completed suicide.

As I sat in St Paul's, I thought of Tommy at his moment of need… alone in a crowd, maybe not knowing where he was or what he was going to do.  You see, suicide is an impulse act. Tommy had done nothing wrong. He had broken no laws.  He just didn't want to go into the hospital. Tommy died alone in a crowd; a victim of his silent war wounds… another war victim.

Once again I thought of our last trip to St Paul's in the summer of 1997, the best summer the Bagosy family ever had. I reflected on my son's death and his loss to my family. Funny how being in St Paul's and hearing the beautiful singing of the boys choir bring such memories of a time when we were all young and innocent.