I haven’t been as faithful to my blog posts as I committed to being. Guess that’s my New Year’s Resolution. So today that’s my focus…or maybe it’s just procrastinating, like taking down the Christmas decorations that are STILL up! Either way, my thoughts over Christmas have been itching to get out. I saw many of my surviving sibling buddies’ posts over Facebook during this season and had a few mixed emotions. I remember the first Christmas that we truly CELEBRATED again. It did take a while, but a few years ago we opened all the old decorations and sifting through them we decided it was time to take Christmas back. So my mom, in her declaratory style, threw out all the old decorations and announced we are starting new. With a brand new Texas styled tree, chicken fried steak Christmas dinner, shiny new decorations and gift exchange we made it intentional to have a good season. With those intentions we created new traditions within our own immediate family while trying to retain a few of the old ones that remind us of Jonathan. 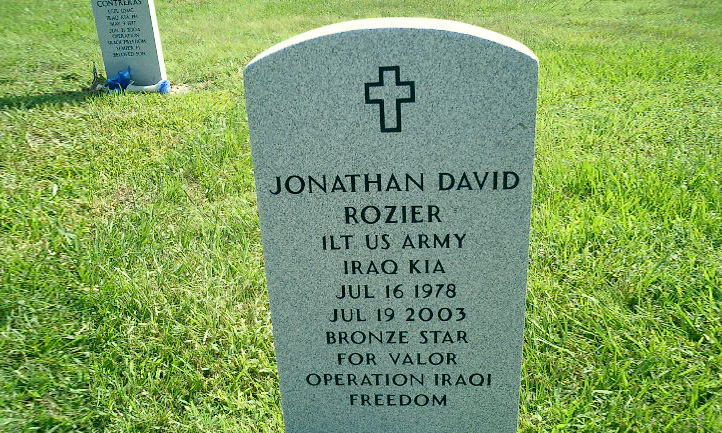 <>I do try to remember my brother in our family times. He will always be a part of who we are. His life and death have refined our family character and traditions. One of our newest traditions is to attend the Wreaths Across America event at the Houston National Cemetery. My nephew, Justin, was able to lay a wreath on his dad’s grave this year. After posting a few pictures on Facebook, I realized something that I haven’t really noticed before. I periodically post pictures of Jonathan when I miss him, when I am thinking about something he did, when I write about his life and death, etc. and I realize that people still treat me with kid gloves on that issue. I get the impression they think when I post things about Jon they imagine me curled up in a ball, writhing in my grief. For those people Jon’s death obviously had meaning and affected them too, and I appreciate that. I also appreciate that they care enough to respond, even though that may not be the emotion that I am suffering under at the moment. Granted, social media is a poor outlet to adequately convey the emotions associated with posts, and intonation is lost over typing. And our generation can be too fond of “over sharing” personal things in a non-personal way. That’s the image I do NOT want to have. I don’t want to perpetuate the notion that every post is from a sorrowful sister. Rather, I want the message of healing to be conveyed. I can talk about my brother without tears and sorrow now, although there are times when I do still cry over him. Often, the pictures I post are on happy days when I am laughing about a memory and want to make sure HE is not forgotten. I think it’s a little bit of an annoyance now, like people want to think of me as sorrowful when I discuss Jonathan…especially after what will be 10 years in July.

So, in my own declaratory style I want to pass along a message of healing and hope. That after 10 Christmases without Jonathan every Christmas season we enter a new season of life without Jonathan’s person but always with his memory. I can smile at the new outlook on life that his life and death have given me. The original message of Christmas, for one, is more prominent in my beliefs now because of how his death affected me. His death only impacted me because his life impacted me. I understand my faith more fully and I can walk with my head high, proud of what I’ve survived and the troubles that I have and will continue to conquer in life. For whatever reason I was Divinely chosen to be Jon’s sister, which was accompanied by love, then grief and now and new understanding of healing and grace.

“History is one tapestry. No eye can venture to compass more than a hand’s-breadth…There is no happiness equal to that of being aware that one has a part in a design.” - Thornton Wilder