Upon arriving at the Colorado Springs, Colorado airport for the National Military Suicide Survivor Seminar, I felt a great deal of anxiety and excitement all at the same time. I wasn't really sure what to expect or how I would feel at this event. Once I arrived at the Cheyenne Mountain Resort, I was greeted by hotel staff with smiles adorning their faces. The atmosphere was warm and inviting, and it had a rustic feel. The large stone fireplace glowed against the wood floors. The overhead wooden beams made the lobby feel so grand. The rooms were beautifully decorated and comfortable with gorgeous views of Cheyenne Mountain. Some of the tops of the mountains even had a light dusting of snow on them. The spectacular view from the spacious balcony brought me such an inner peace and tranquility to my spirit. The cool crisp air helped clear my mind and ease my soul. 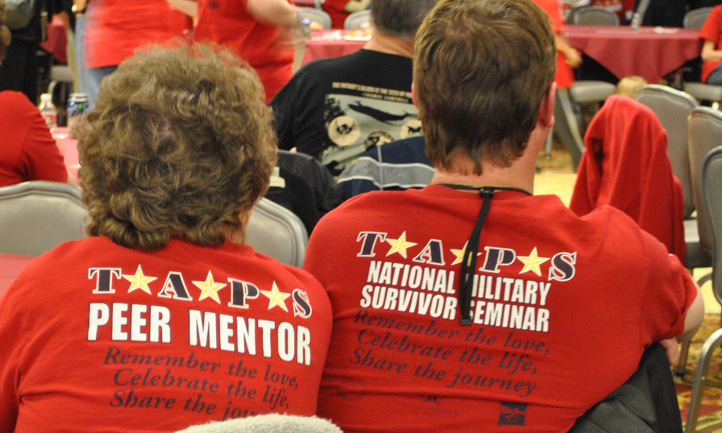 From the moment the seminar started, I felt nothing but a family atmosphere. So much love and compassion was shared among us survivors. Even though most of us were complete strangers, I felt like I was among family. There was an immediate bond between us, as we had 3 commonalities that we shared…our loved ones were in the military, they took their own lives, and we are survivors. I have never experienced such an outpouring of love and kindness like this. It is something I will treasure for the rest of my life. I don't know of anywhere else where you get such a sense of belonging. Being able to be among other suicide survivors brought me peace in that I didn't have to explain my son's death. There was no stigma there…just understanding, love and support. The bond I felt with others was so strong. There were so many hugs. It was such a safe environment to be able to share my story and not feel judged by others.

Since the suicide of my son, Cody, my address book has changed drastically. This weekend it once again changed, but this time it was being filled with names and addresses of new friends. Being able to share my story and listen to others has been very healing for me. Looking out into the banquet hall as we all shared a meal, I didn't see strangers in the room…I saw new friends and a true meaning of family.

I am also a participant in the online group through TAPS. I have spoken to these men and woman for a little over a year now. I was finally able to meet many of them in person. These strangers have given me so much love, support and hope since my son's death. It was an incredible feeling to be able to meet them in person and give them a hug!

My two daughters, Megan and Morgan, attended the Good Grief Camp. It was my oldest daughter's, Megan age 19, first time attending any event through TAPS. She was hesitant upon attending this suicide seminar. I can tell you though that she, as well as I, made such connections with others who were attending the Good Grief Camp. This was literally a life changing event for Megan. She no longer feels as if she is walking this journey alone. Being in the presence of other suicide survivors her own age has shown her that she is not alone. She now has new friends to walk along beside her on this journey. Morgan, age 12, had attended the National Military Survivor Seminar in Washington, D.C. this past May. She felt alone and as if nobody there in Washington D.C. understood her loss, as there was only one other child attending in her age group who had lost someone to suicide. Here in Colorado, Morgan made new friendships with others her own age who shared the same tragedy of suicide loss. She expressed that she felt like she belonged here at the National Military Suicide Seminar. Knowing that my girls had such a positive experience and that this event made such a positive impact on their lives, gives me great comfort in knowing that they no longer will be walking this journey alone - they have their TAPS family which has given them healing and hope.

I attended the Peer Mentoring class, along with my husband, at the seminar after completing our online portion of the class. Don Lipstein and Kim Burditt were wonderful facilitators of this class. They were knowledgeable and able to answer questions readily. They showed us how to be supportive of others who are just beginning their own grief journey. I have wanted nothing more since my son's death than to be able to help others know that they are not alone. Suicide is such a lonely journey, as many people have never experienced the loss of a loved one through a suicide. TAPS was my lifeline after my 18 year old son's death, and I hope to be able to become part of that lifeline as a Peer Mentor for others.

In closing, I would just like to say that my family and I are already looking forward to the next National Military Suicide Survivor Seminar. I know the next one will feel more like a family reunion. I have only been home a day and am already missing my new TAPS friends, but I am looking forward to staying in touch with all of those I met. Thank you to TAPS for the opportunity that you have given my family and me. Being suicide survivors, I can honestly say that I don't think there is anything out there that can compare to our experience this weekend.