Welcome to my journey: a world of choice and change that constantly collides with the desire to just curl up in a ball and hide while I cry. I have met some extraordinary people along the way, and I also have been blessed to have the support and understanding from an amazing group of friends. There have been a constant few, affectionately named the Cody Comfort Club, who have been with me for every step of the journey and we continue to be there for each other to this day. My two dearest girlfriends and my best friend help me keep my filter engaged and provide encouragement and support as I traverse this unfamiliar path. And when I least expect it at certain points, someone new joins my journey. That is when I am reminded that I am not alone.  People are put on your path when you are ready to receive the gift of their friendship. 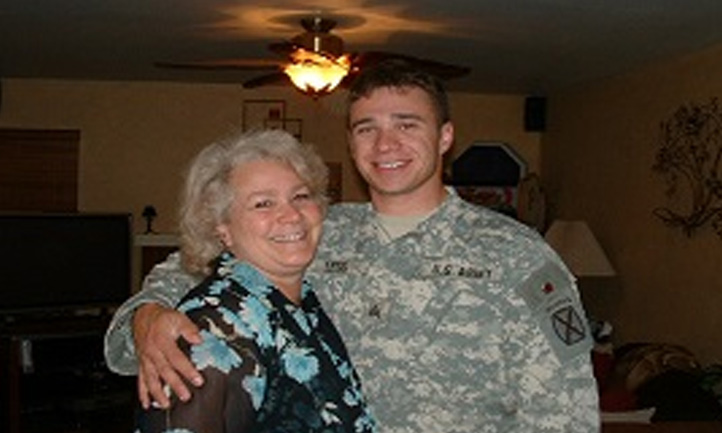 I am learning who Bunnie is. . . no longer the mother who waits for the phone to ring, but this person I have become, my new normal. As the five-year mark of my son's death approaches, I see the road I have traveled and realize there is so much more to accomplish. Through my son's sacrifice, I was able to buy a house, and though it is my home, I am just the caretaker. It is not the fact that he died that keeps me going, it is because he lived. I am his historian. Who better to tell his story than I?

When Cody was growing up, he always wanted to spend his birthday at Disneyland. His closest friends and I carry on that tradition by spending his birthday weekend there every year. We tell Cody stories, laughing as we remember his antics, and helping each other heal without even realizing it until afterwards. I am also very blessed to have the friendship and comfort of those with whom my son served. Some are no longer in the service and the rest are now scattered at various posts across the country, but I appreciate their support and know that we are forever family.

My son, Sgt Cody Legg, along with Sgt Shane Duffy and Spc Jonathon Emard, was killed in action 04 JUNE 2008 while on a high value target mission in Hawijah, Iraq. During his memorial service at Fort Rosecrans National Cemetery, a citation was read which explained how he had bounded toward the enemy in an attempt to rescue his two fallen squad members. General Custer then handed me his bronze star medal with "v" device. The valor was awarded for his courage and leadership, without regard for his own personal safety. Each year since then, a scholarship at his high school is awarded to a graduating senior who exemplifies leadership and teamwork. There is also a bronze plaque in the school’s home team dugout that states, "Individual commitment to a group effort, that is what makes a team work." He was my only child and I can honestly say that my pride in his sacrifice overshadows the grief.

I will always conduct myself in a manner that does not disgrace or dishonor the sacrifice my son made. Mainly because no matter what I do, it will not change the outcome. You never know how strong you are until being strong is the only choice you have.