I had a really hard time deciding what I wanted to write this blog about and finally decided to just write about how I have been feeling.  I haven't had the easiest past few weeks and while I don't want to be a "Debbie Downer," I do know that others have gone through this too and I think it's important to know we're not alone…not just in grief, but in life itself. 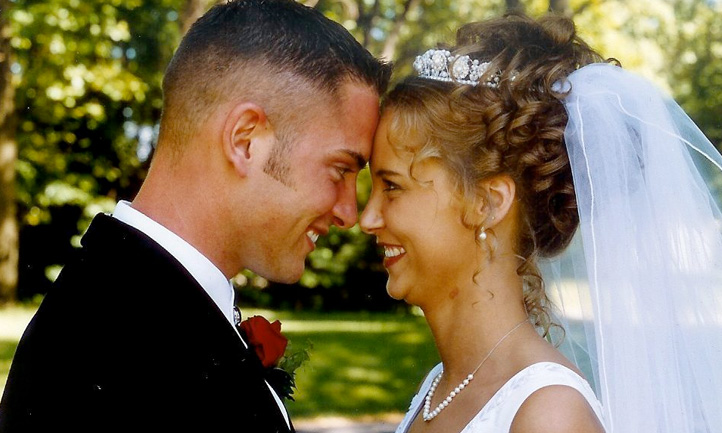 This time of year is especially difficult for me.  May, June, and July contain all of my family's personal holidays with some additional holidays added on.  The list begins with my birthday (May 6), then Mother's Day, Memorial Day, my husband's birthday, our anniversary, my oldest son's birthday, Father's Day, my youngest son's birthday and finally, my husband's angelversary on July 28th.  It's a lot!  It is three months full of forcefully enthusiastic celebrations, fake smiles, midnight tears, and a roller coaster of emotions.  Unfortunately, sometimes all of this just gets to be too much and each day starts to feel like another brick on top of my already smothering pile.  It becomes a struggle just finding a hole to breathe through.  While there are some days when I can find some relief from the outside pressure, there are others where it is so heavy I feel like I am struggling just to stand.

This year I found our anniversary to be especially difficult.  I'm still not exactly sure why, but it was. Maybe because a wedding anniversary is a very intimate and personal holiday.  Jeff and I got married at a courthouse in Guam on April 1, 1999, and just over a year later on June 3, 2000, we had our marriage blessed by God before our family and friends.  That was the day that solidified our relationship, and we made a promise that would never be broken.  Maybe this year's anniversary was hard because while that day was so poignant in our lives, others don't even seem to remember it anymore.  Even for those that do know it's our anniversary, they don't really know what to say or if they should even say anything at all.  Do you say "Happy Anniversary" even though the second half of the party isn't here anymore?  For some maybe not, but for me, absolutely!  I need people to acknowledge that day.  I need people to remember what a special day that was and how being with Jeff has changed my life…all of our lives.  Just because my loved one isn't here anymore doesn't mean we can't celebrate the love that we shared.

Father's Day was also strangely difficult, but in a different way.  I will admit that it is the one holiday I tend to blow off and pretend it doesn't happen.  We celebrate Jeff on Memorial Day and right after that on his birthday (May 29th). When Father's Day rolls around I find that I am exhausted and just can't do it anymore, so I prefer to skip it.  What I didn't realize was the effect that "skipping" Father's Day had on my boys.  This year, my youngest son had a tough day from the moment he woke up, and it honestly didn't even occur to me why until bedtime.  He got upset with me for something and ran into his room crying.  I could hear him through the door sobbing, "I miss Daddy!  I don't want Mommy….I want DADDY!"  As you can imagine, this was the ultimate stab in the heart.  I was devastated.  First because no matter how hard I tried, I could never give him what he truly wanted… his Daddy back. Second, because I was extremely hurt that he simply didn't want me here.  Even though he's only 5 and didn't truly mean all that he said, it still hurt and in that moment, I too wished that Jeff was here instead of me.

I have learned that grief has its own timeline and it will rise and fall whether I want it to or not.  I have also learned that sometimes I have to just let it come, and trust in the saying "this too will pass" because eventually it does.  I have learned that on these difficult days I need to stop pulling away from my family and friends…for they are the ones that ultimately get me through.  I have realized that for me, I need to not only feel their love and support, but I need to see it.  I know that no matter what happens and however lonely I feel, I am never truly alone because they will always be there for me. Sometimes I just have to ask.  This was evident when I called a friend on the night of our anniversary and asked her to come sit with me while I watched our wedding video.  Not only did she come over and sit with me (with a bottle of wine), but her company immediately brought the light back in my eyes and a smile to my face.  A seemingly simple gesture spoke volumes to me.

At the end of the day, when those bricks are feeling too heavy to carry on your own and no matter what your situation may be, there is always someone to help lighten the load.  Family…friends…TAPS!  There is always someone willing to be there for you, but you have to remember too that sometimes it's up to you to ask.  They don't know what you need unless you tell them.  This is a lesson that has taken me almost 3 years to learn…and I am still working on it!