Four years ago on August 16, 2009 Tommy's friend and hooch mate Cpl. Nick Roush, U.S.  Army Special Ops, was killed in action in Afghanistan while serving with a MARSOC Special Operations Team.  As I found out later, Nick and Tommy took turns on patrols; he night Nick was killed he had volunteered to take my son's patrol. The vehicle ran over an IED and Nick died. 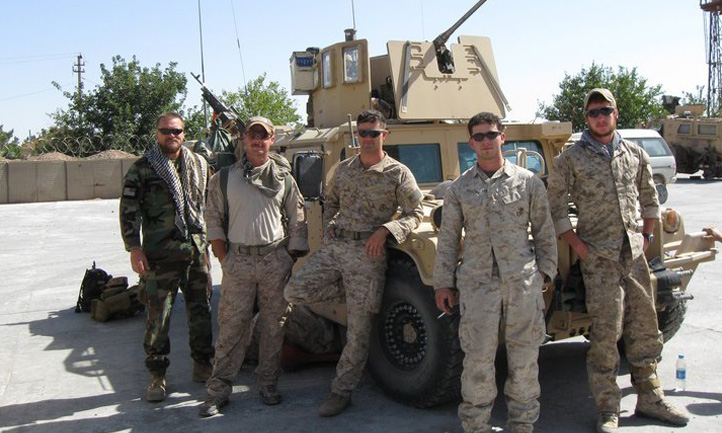 Tommy never mentioned to me what happened, nor did I notice the black bracelet he wore on his left wrist. After Tommy died, his wife Katie told me what had happened to Nick, and how Tommy felt he was responsible for Nick's death. In Tommy's medical records he told the Navy Physiologist that it should have been him, not Nick, who died. Tommy was suffering a clear case of survivor's guilt or as it is sometimes called, "fortunes of war."

Sometime after Tommy's funeral, I felt I needed to find out what happened to Nick, and why it affected Tommy so much. I had little information about Nick…only the information printed on Tommy's black bracelet - the date he died and his name. I googled what I had and found Nick's obituary online. The obituary told me the date and place of death, where he was buried, and who his survivors were, including his fiancé. I found Nick's fiancé online and decided to reach out to her. I sent a note of condolence. I received a reply in return telling me how much she loved Nick, and how religious they both were. She shared that Nick's father and grandfather were both Baptist bishops. She directed me to Nick's father and gave me his email address.

After learning a little more about Nick, I became more curious as to why Nick and Tommy became friends. You see I thought that my son was an agnostic at this point in his life. Tommy was a Catholic but had moved away from the Church, and as far as I knew, he was not practicing any religion.  I decided to write to Nick's father. I explained who I was and offer my condolences on Nick's death. I explained I was researching my son's time in Afghanistan and looking to find out more about Tommy and his MARSOC team in Afghanistan.

I received a reply from Nick's father, Bob Roush, who told me that he had Bag's (Tommy's nickname) picture along with his MARSOC Special Forces Team as wallpaper on his computer. He knew Tommy's nickname and knew that Tommy had died and how. To say I was surprised is an understatement. Bob   explained that someone had sent him the picture, along with the names of the team members. Bob later sent me the attached picture.

During our discussion on our sons' time in Afghanistan I asked, "What made Nick and Tommy friends?"  I explained Tommy's take on religion. Bob let me know that besides their love of cars, they also shared their religious beliefs including the fact that Tommy knew the Bible as well as Nick. Bob went on to share with me how Nick had died and how he had lived. I in turn told him about Tommy and his children. I am so glad that Bob and I have been able to share our sons' lives.  I am positive if Tommy had a chance to speak with Bob before he died… he may still be alive.

Bob Roush and I continue to exchanged emails and phone calls. We try and send each other emails on our sons' angelversaries and at other times when we sense it is necessary. Bob traveled to Washington DC and while there visited Tommy's grave at Arlington National Cemetery. I have promised to visit Bob and his family in Michigan.

Bob and his wife are now Patriot Riders and make it to as many veteran funerals as possible in Michigan. Bob also has kept a promise to Nick by opening a car shop - rebuilding what I call muscle cars from back in the day.

I know if we had it any other way we would wish we didn't know each other as no one wants to belong to this Father's Club.