My name is Bob Bagosy, I've been asked to write a monthly blog for TAPS from a man's point of view if you will! I'm just a Dad not a professional writer so what I write will be from my heart. 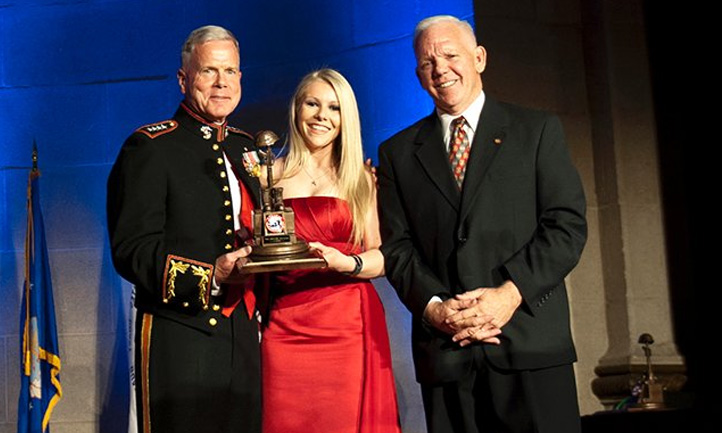 On Monday May 10, 2010 the day after Mother's Day around 1:00 PM on a clear, blue, spring afternoon on board Camp Lejeune, my son Sgt. Thomas R Bagosy USMC a career Marine age 25, married father of two children completed suicide in front of God and witnesses. Tommy as I called him had been deployed 3 times since 2005, once to Okinawa, once to Iraq 2006-2007, and Afghanistan 2009. He was awarded two Combat Action ribbons as well as the usual medals and awards befitting a Combat veteran, and 6 year Marine.

Tommy came home from Iraq in 2007 after being involved in at least 6 ied explosions. Tommy self-reported his medical problems on his return and was evaluated by the Naval Deployment center as having a TBI as well as PTSD given medication and 15 minutes of face time with a Physiologist, and sent back to work. Tommy received treatment and medication until March 2008 at which time he stopped medication and visit's to the Physiologist. Tommy called me in March 2008 and told me he had reenlisted for another 4 years, when I asked why? He told me he hasn't done enough that he was working with Marines who had more deployments, and he felt that he was running out on his friends. When I asked about his TBI and PTSD he told me that it was as good as it was going to get! Tommy then told me he had shipped over to MARSOC and my heart skipped a beat but I was very proud of his decision, and felt that he would be off better with other career Marines who had also been there and done that the best of the best, and that he would be safe with such warriors.

Tommy shipped out to Afghanistan in June 2009 but before he went I visited him at Camp Lejeune, NC. While traveling with Tommy he introduced me to a group of Marine's. I asked who they were, Tommy told me they were his guys! I remember saying to myself, Tommy has Guys?  Can't be he is only 17, you see we all have a tendency to think of our children as a certain age, with Tommy I always thought of him as the rebellious 17 years old.

To think that he was now 24, a Sergeant of Marines with men reporting to him as well as responsibility for millions of dollars' worth of equipment was foreign to me, his father. At that moment I realized what a man my son had become, responsible, brave, and honorable I was very proud of the man and Marine he had become.

Tommy served his Country well in Afghanistan according to the Marines who honored him at his memorial service at Camp Lejeune. The Marines spoke told of a Marine who knew his job and also knew how to fight. I found out later by reading his service record that his team while on patrol were ambushed by insurgents they were outnumbered, and were told to pull back. Tommy and another Marine drove back into the kill zone to check on down allies, and to pull another vehicle full of equipment back out of the ambush, both were awarded combat action ribbons for their heroic action.

We buried Tommy at Arlington National cemetery on July 6, 2010 a very hot and humid day in Washington, DC. I remember thinking that I must not cry after all men don't cry especially a man who had been a Marine, a police officer for 30 years, and a father of 5 children. I was able to keep it together and not cry during the funeral, and after we retuned.

In October 2010 while at home by myself I found myself crying like a baby for several days,  and was embarrassed, angry, and alone with my memories of my brave Marine.  Today I still cry but not as much and not as long, and I am no longer embarrassed, angry or alone. It will be 3 years since Tommy took his life, on May 10, 2013. I miss my son every day and always will!